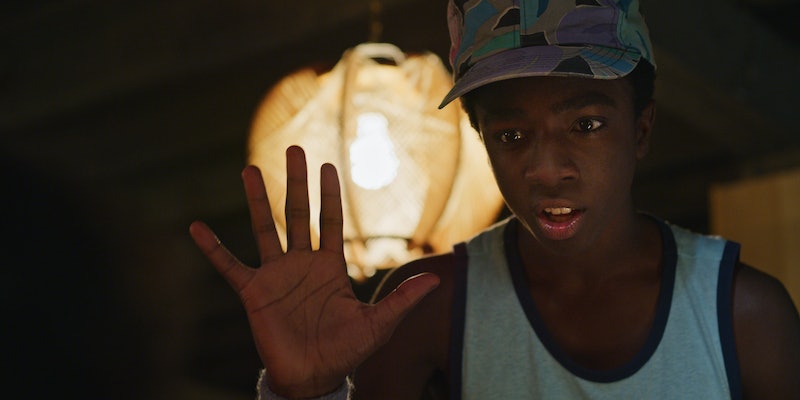 The third season of Stranger Things left a lot of lingering questions unanswered. Hopper's fate remains unclear; the Russians are feeding prisoners to a Demogorgon for who knows what reason; and half of our core characters just left Hawkins, possibly for good. So what could this all mean for the next season? Well, if you talk to Caleb McLaughlin, who plays Lucas on the series, it's possible that Stranger Things 4 might not even happen at all.

During a recent interview with Entertainment Weekly, McLaughlin shared his thoughts about the latest installment of the franchise before deciding to give us all mini-heart attacks by joking that a fourth season isn't necessarily a guarantee. "It’s all up to the Duffers and the writers if they want to keep going," McLaughlin teased to EW. "Maybe they want to stop now. Maybe they don’t want to give anyone another season. Maybe they just want to leave you guys hanging like that."

Granted, it's important to note that the young actor appeared to be joking about this for the sake of driving diehard fans wild. But considering that Stranger Things has yet to be renewed for Season 4, at least officially, the remarks — while all done in good fun — hit just a little too close to home.

However, despite how terrible that outcome would be, McLaughlin did make a valid point. The writers could choose to leave these stories open-ended leaving it to the audience to decide what happened next. "I talk to people about this all the time, we can literally leave you guys hanging on the Upside Down," McLaughlin explained, adding how fitting it would be for a show that, at its core, is so full of uncertainty and mystery:

But all joking aside, McLaughlin said he's looking forward to seeing where his character's arc could go in future seasons (and yes, that's plural!). He's particularly eager to dive deeper into Lucas' relationship with Max and have him attempt to be there for her now that she's suffered such a terrible loss with Billy's death. "I feel like if we do have season four you know, and we’re not married, we’re still young, I feel like Lucas wouldn’t know how to do it," he admitted, in regards to knowing how to help Max cope with her grief. "Maybe she’ll get mad at him because he might not know how to really be there for her at moments in time. So I think that would be pretty interesting to see that."

And, of course, he'd love to see Lucas have more take-charge moments, like his brilliant idea to attack the Season 3 monster with fireworks. "I really love Lucas season 3," McLaughlin said. "I want to see more of his clutch moments. I feel like Lucas is the man with the plan. I want to see a lot of those moments."

Let's just hope Netflix feels the same way and grants this series with another season, so viewers can see these storylines come to pass.