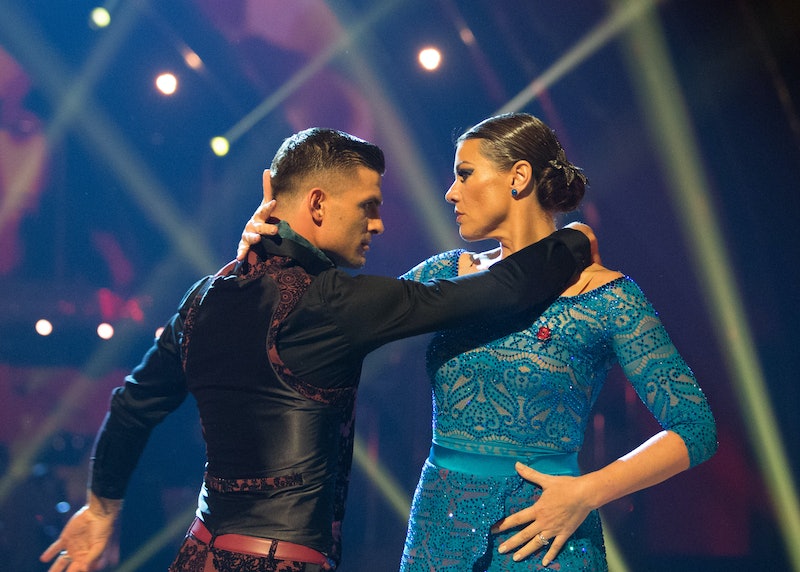 Here's one reason to approach the dancefloor with caution: Strictly Come Dancing star Kate Silverton's injury, which she discussed on last night's It Takes Two. You might recall that the newsreader had something of a ropey episode last week, as Digital Spy reports: her Argentine tango with partner Aljaž Skorjanec netted the previously high-scoring pair only 23 points. Silverton mentioned her injury before the live show, but spared viewers the grisly details — until It Takes Two last night.

Speaking to host Zoe Ball, the journalist revealed that she almost didn't perform after a nasty incident while rehearsing the day before. "On the Friday, about 5 o'clock, Aljaž was picking me up in the rehearsals and he did have to whisk me around quite a bit and I felt this pop," she said. "I was like, "O.K., that's not good!" Then, like an hour later, [I was] sort of crawling along the corridor." Sounds a bit more like a horror film than the family-friendly Strictly Come Dancing, doesn't it?

So what injury did Silverton actually sustain? (If you're squeamish, I'd strongly advise you to stop reading now.) "Basically, the muscle came off the rib," she said, at which point I clenched every muscle in my body. "But we knew that we wouldn't get the chance to do it again, so we just pushed on. But it just was a shame."

Silverton and Skorjanec performed their Argentine tango (to "Assassin's Tango" by John Powell) despite Silverton's injury, but the judges weren't especially enraptured by the final performance. Craig Revel Horwood scored the couple a measly four, calling the performance "stuck in the mud," as the Evening Standard reports. "For me it was too heavy — it needs to be a lot lighter," he said. "I felt I could feel each moment coming." Shirley Ballas, who awarded the routine six points, was similarly critical, saying the routine was "laboured" — unsurprisingly, given the severity of her injury!

Darcey Bussell and Bruno Tonioli's appraisals, however, were a little more positive, according to Digital Spy. "Your strength is telling the story — the intimacy was on it," Bussell said, though she called the routine "not [Silverton's] best." Like Ballas, she awarded the performance six points. Tonioli, however, said that "some of the figures were very nice," scoring the pair a seven.

This week, Silverton and Skorjanec will perform a quickstep to "I Want You to Want Me" by Letters to Cleo (yes, that's the song in the credits of 10 Things I Hate About You). The journalist told Zoe Ball on It Takes Two that she's excited for the performance, saying, "It’s really good fun. With this week we’ve got a fun one."

And she's determined to make it to Blackpool, too. "Aljaž has told me about Blackpool, the sort of spiritual home of ballroom," Silverton said. "Actually, just where we are now, with how much we've learned, and how much I've progressed, it would mean everything, actually." Let's keep our fingers crossed for Kate and her rib, then!