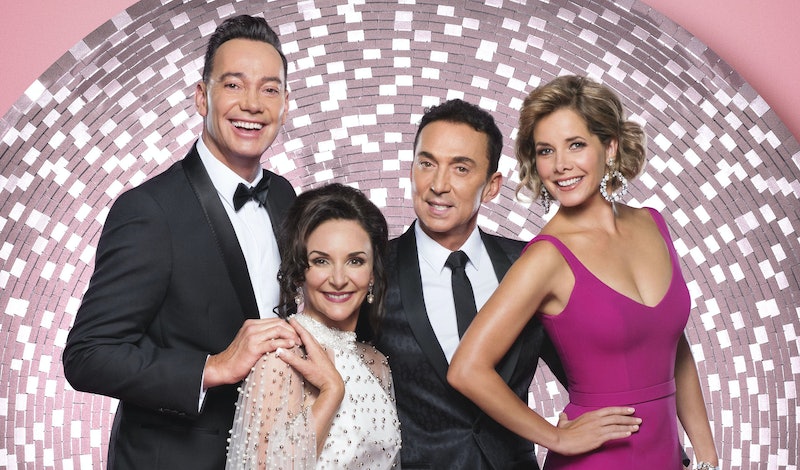 Aside from the final, there's one major episode of Strictly Come Dancing that every contestant aspires towards: Blackpool night, when the show decamps to one of the global centres of ballroom dancing. For almost a century, the town's annual dance festival has cemented its revered status amongst dancers — and it's been a yearly Strictly fixture since 2009, according to the BBC, though the show first relocated to Blackpool in 2004. But despite the decades of glamour played out in the town's historic ballrooms, Strictly Come Dancing's Blackpool show is somewhat less luxurious behind the scenes, as these backstage secrets reveal.

The Tower Ballroom, where the Strictly Blackpool show is filmed, opened in 1899, the BBC says — and back then, nobody anticipated an enormous TV crew squeezing in backstage. While the show's usual studios in Elstree, London offer capacious dressing rooms, accommodations for the prop and costume departments, and all the facilities necessary for a huge TV production, the Tower Ballroom provides nothing of the sort. The BBC took a trip to Blackpool to report on the fast-paced preparations for tonight's show, and found that the Strictly cast and crew are making do with something pretty far from luxury.

The Dressing Rooms Are Seriously Makeshift

Tess Daly and Claudia Winkleman have the best dressing rooms, the BBC says, though they're not especially plush. The professional dancers are squashed into two communal dressing rooms — one for men, one for women — while Darcey Bussell gets ready in a broom closet. The celebrities, meanwhile, aren't even assigned dressing rooms, making do with corridors and wardrobe rooms to don their sequins.

"In Elstree we've all got our own lovely modern dressing rooms and here it's a bit makeshift, but it brings everyone together," said Faye Tozer. "This is the entertainment biz — we've all changed in a toilet."

The Props Have To Be Built In The Ballroom

The Tower Ballroom's service lifts are too small to move large equipment, forcing the crew to heave equipment up the stairs themselves. And the ballroom doors, again, weren't installed with TV production in mind. "We have very small doors and we have very large props, so a lot of stuff has to be made in the ballroom because it doesn't fit through the doors," explained line producer Kate Jones. "The props are big because the ballroom's so big. Everything just gets enlarged when you come here."

Two major items aren't recreated for the Blackpool show: the judges' desk and Claudia Winkleman's booth, where she speaks to the celebrities and their partners after they perform. Instead, replicas are stored in Manchester, dusted off for a yearly appearance on the telly.

Some of the props for tonight's show? Giant piano keyboards for Joe Sugg and Dianne Buswell's routine, and a fish and chip booth called "Pashley's Plaice" — presumably for Ashley Roberts and Pasha Kovalev.

...which doesn't mean it's damp and dusty. Charles Venn spoke admiringly of the venerated venue, telling the BBC, "There's a lovely decadence to this place." He added, "You can see it in the architecture and the building — it feels historic. The seats, the walls, the smell, everything feels like you're going back in time, and I love things like that myself. I feel like I'm walking into history."

Line producer Jones feels similarly, saying, "We're so proud to come up and do our show from up here each year." She continued, "I personally love coming here, and I get goosebumps when I walk into that ballroom."

The Dancefloor Takes Some Getting Used To

As a purpose-built venue for ballroom dancing, the Tower Ballroom has a sprung dancefloor — which means it bounces a little, absorbing shock from the dancers' movements and minimising the risk of injury. "You feel a bit like, 'Ooh, my belly!'" said Karen Clifton, Charles Venn's partner. "We're not used to having a bouncy floor in Elstree, but that's the beauty of Blackpool."

Looks like the celebrities have a little more to contend with tonight than pre-show nerves: they'll be changing in the corridors, taking their physio appointments in the toilet (seriously), and bearing the weight of a century of ballroom history. Still, it's a milestone episode each celebrity hopes to reach — so it's evidently very much worth it.