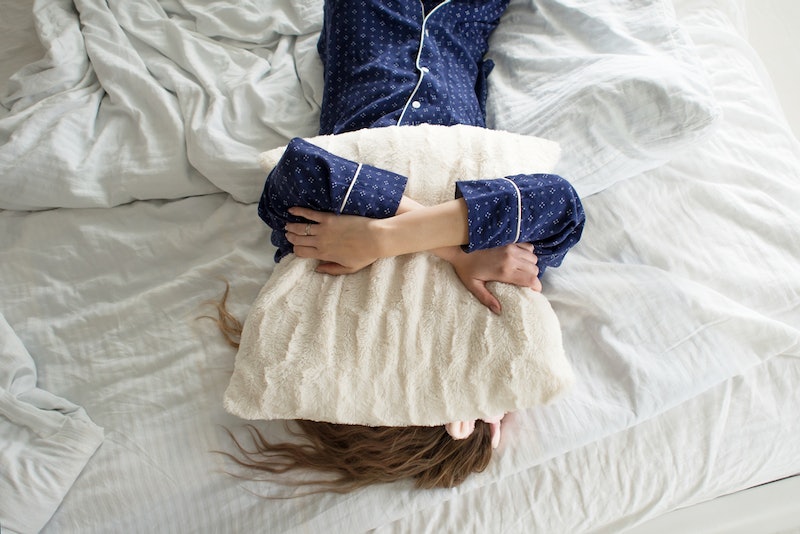 Sure, going out with your friends or going on a date or going to see your favourite band perform live all sound good, but doesn't "bed" just sound so much better? Struggling to get yourself out from under the duvet is just part of the workday, but sometimes too much sleepiness can be a sign of something more serious. It's perfectly normal to not want to get out of bed like, ever, but if you're late to everything because of it, then it starts to become an issue. Especially since struggling to get out of bed can be a sign of a psychological condition.

According to the BBC, there's a name for an extreme aversion to getting out of bed in the morning — "dysania." "It is just a name given to sleep inertia," sleep expert Neil Stanley tells me. It's "the feeling of grogginess often experienced for up to two hours after waking," and it's common to night owls.

As Dr. Mark Salter from the Royal College of Psychiatrists told the BBC, it's "a rarely used term for "I-don’t-get-out-of-bed-in-the-morning," and can be experienced by "those suffering from a major depressive disorder."

Dysania has yet to be recognised as an official illness, but it can be associated with other mental health conditions like depression. And if you're struggling with an extreme aversion to getting out of bed in the morning, it's also worth considering that dysania may be the result of something else. As Dr. Salter explained to the BBC, “Sleep disturbance, lethargy, and early morning waking are bodily symptoms [of depression]. The lethargy combined with early morning waking sometimes manifests itself as a complete inability to move. People with severe depression, for example, may not be able to raise their hand to drink a glass of water.”

If you're now unsure whether you're struggling with dysania, or if you're just plain old sleepy, then Rise And Shine offers some tips to help you find out. "A good litmus test for whether or not you suffer from dysania is to write out specific words to describe how you feel when it’s time to get out of bed," they suggest.

If those words are something along the lines of "difficult, tiresome, frustrating, or challenging, you’re probably like the rest of the population. However, if you find the experience stressful, anxious, overwhelming or even debilitating, it probably means that you're going through something a bit heavier than just CBA-ness. If you're concerned, going to see a doctor will be a good call. There's a big difference between simply not wanting to leave your bed and a chronic inability to get out of it, and a good coffee will also be a good indication for whatever camp you fall into.

If you're worried that you might be suffering from dysania, or a related mental illness, make sure to book an appointment with your GP, or you can find resources and information on where and how to seek help from charities like Mind, and if you're struggling with sleep visit The Sleep Council to see find get useful tips and expert advice.