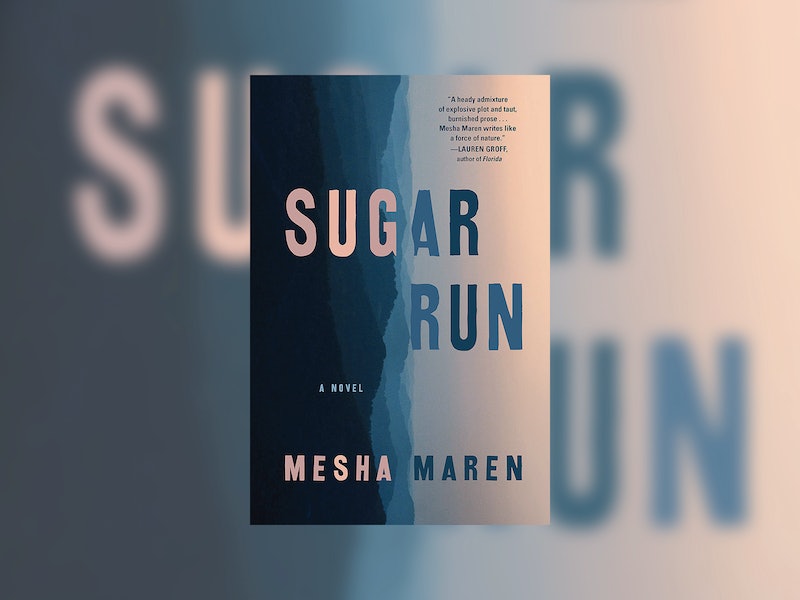 "Above the razor wire, barely visible, the soft swells of green mountains rose," Mesha Maren writes in her debut novel, Sugar Run. "Jodi stiffened... Eighteen years at Jaxton [Prison] and she never knew she was living in the mountains. From the exercise yard she had only seen what was straight above."

Sugar Run, ostensibly a look into failed and fleeting queer relationships in the South, asks readers to consider other types of love — specifically, love of a place and love of oneself, in all their deeply melancholy and complicated forms.

When the book opens, Jodi McCarty, now 35, has just been released from prison after an 18-year sentence she earned as a teenager after being convicted in the murder of her girlfriend, Paula. Although the details of the murder are initially hazy, the incident was clearly sinister; violent images of blood and panic break into the novel’s storytelling through flashbacks and alternating chapter timelines. A horrifying question looms over the narrative: How much of her past is Jodi about to repeat with her newfound freedom?

Sugar Run... asks readers to consider other types of love — specifically, love of a place and love of oneself, in all their deeply melancholy and complicated forms.

Your mind, like mine, may jump to telenovelas and tense mystery thrillers when you learn that this book is about a murderous female killing her lover in a rage. But through exquisite prose and beautifully nuanced storytelling, Maren offers a complicated examination of love, identity, the passage of time, and the way small decisions can propel a life forward.

A native of West Virginia, Maren understands the feelings of shame, confusion, repression, and conflict that arise from identifying as LGBTQ in the largely conservative South. The author now teaches writing to incarcerated folks at the Beckley Federal Correctional Institution in Beaver, West Virginia. This alchemy of lived experience lays the foundation for Sugar Run. From the first page, Maren’s complex characterization of Jodi, and the cast of Southern archetypes she encounters, is abundantly compassionate and leaves incredible room for nuance. The novel is undeniably tender.

Where Maren excels, though, is in writing Jodi's internal monologue, most especially the protagonist's musings on her return to Bethlehem Mountain and her desire to discover "a refuge from judgement" where she can reconnect with herself. Jodi describes (and Maren writes) about the beauty of misty mountain mornings and the damage of fracking with the intimacy of an expert. West Virginia is her place, her center, and the place where she feels the most herself.

"It makes so much sense seeing you here," another character remarks to Jodi during a visit to her grandmother’s land. “I mean, you make so much more sense in this place — but you don’t really know who you are yet, do you?"

West Virginia is her place, her center, and the place where she feels the most herself.

It's true. Jodi's grandmother has died, she is estranged from her family, and her ancestral land has been sold to an unseen Floridian. She has a GED, no work experience, and a felony conviction — all of which put traditional plans for upward mobility out-of-reach. Her last two romantic relationships have been with women, though Jodi struggles to identify as queer to her family and friends — and even to herself.

"She has never felt like she could properly see herself, Maren writes of teenage Jodi. "If she could push back the words — dyke, queer — then everything would make sense and turn out all right."

Leaving prison is a difficult, dehumanizing, and precarious experience, and Jodi’s struggle to reconcile her actions with her feelings make the narrative all-the-more painful. But Maren zeroes in on the most complicated feelings, and trusts that readers will see Jodi and understand her.

Sugar Run is a book that takes its time. Readers are transported to a sticky West Virginia summer night to crack open a beer with Jodi and journey through the darkness and light each character undergoes. It’s an intense, vulnerable experience that asks you to consider if you could you ever love someone, some place, some experience so deeply that you’d lose everything for it.