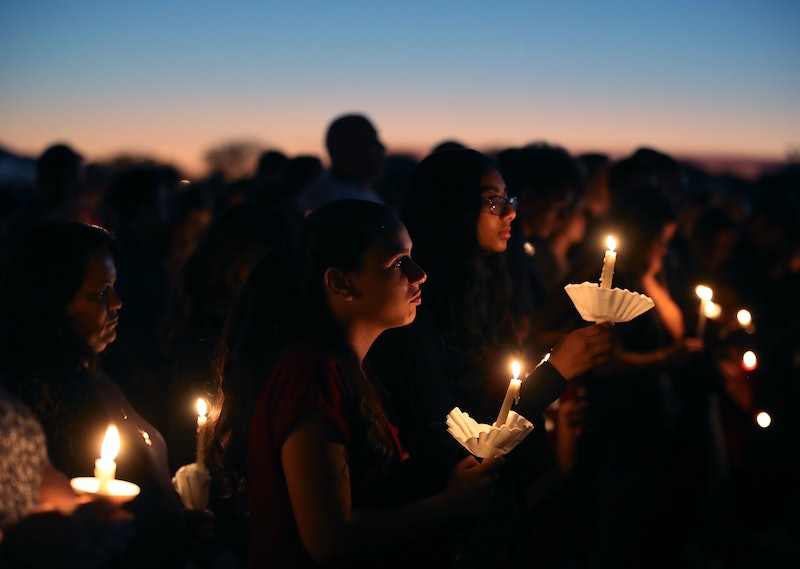 Following the news that two survivors of the 2018 mass shooting in Parkland, Florida, died by suicide within a week of each other, it was reported that the father of a victim of the 2012 mass shooting in Newtown, Connecticut, died by suicide on March 25. Jeremy Richman, the father of Avielle Richman, had founded a nonprofit with his wife, Jennifer Hensel, that supported research on the neurological foundations of violent behavior, the New York Times reported, after their daughter’s death by gun violence. The news of these three deaths of people affected by mass violence has many concerned about suicide contagion, or the idea that news about suicide could “inspire” others to attempt suicide themselves. But suicidologists say that it’s important to understand these issues in the context of public health.

What we do know, Foreman says, is that survivors of trauma are not necessarily going to go on to attempt suicide — it’s far more complicated than that. “The experience of the trauma increases your risk [for attempted suicide]. But most people who have trauma don't go on to develop Post-Traumatic Stress Disorder (PTSD). Most people who have PTSD don't go on to be suicidal. Something more serious or more complicated is going on.”

“Evidence has accumulated to support the idea that suicidal behavior is ‘contagious’ in that it can be transmitted, directly or indirectly, from one person to another,” a 2013 report on suicide published in Contagion of Violence says. This can happen in communities or groups of people, or as a result of messaging from the media. Many guidelines on reporting on suicide emphasize the importance of minimizing the risk of “copycat suicides,” and suggest avoiding discussing details about the death, avoiding stereotypes or tropes about suicide, or over-simplifying or sensationalizing the issue.

But what’s missing in a lot of the coverage of these deaths is the acknowledgement that suicide, attempted or completed, is ultimately a health issue. “In very unusual situations like this, where there's mass shooting followed by several suicides or attempts, that's a very unusual public health situation,” Foreman says. “The truth is if you're exposed to suicide deaths and traumatic events like this, you have a lifetime risk factor [for suicide]. … What I'm going to tell other people who are survivors is, if you have this risk factor and you know it's a chronic health condition, treat it like every other chronic health condition. Treat your risk factors for suicide as seriously as you would treat any other chronic health risk factor. And then take care of yourself today.”

Other risk factors for suicide attempts or death by suicide are a prior suicide attempt; a history of depression or other mental illness (including substance use disorder or PTSD); a family history of suicide attempts or mental illness; or being incarcerated, according to the National Institute of Mental Health (NIMH). Suicide is the 10th leading cause of death for Americans overall, and the third leading cause of death for people aged 10 to 24, according to the CDC. That means that suicide is, unfortunately, “alarmingly common,” Foreman says. “On the same day that [the Parkland survivors died by suicide], 127 other Americans died similarly. In some ways, I don't want us to act as if suicide deaths are highly unusual. They're just high frequency in this group. And that's scary, right? But this is happening every day, all over the country.”

Foreman stresses that death by suicide following trauma is not an inevitability. “Most people overwhelmingly who experience trauma or survivor's guilt don't go on to [die by suicide]. We don't understand the difference between someone who's experienced it who recovers and some experienced it and dies. We have to remind everyone it's not a foregone conclusion that you're going to experience a trauma and then all of this tragedy. That’s not the case. But in order to turn around, I think that communities will need to consult with experts, and leaders will have to treat mental health and suicide risks like the very serious public health crisis that it is.”

“Calling the crisis line today will help you get through today. But the community leaders are responsible for figuring out the public health issues for [these communities] for the next couple of decades.”