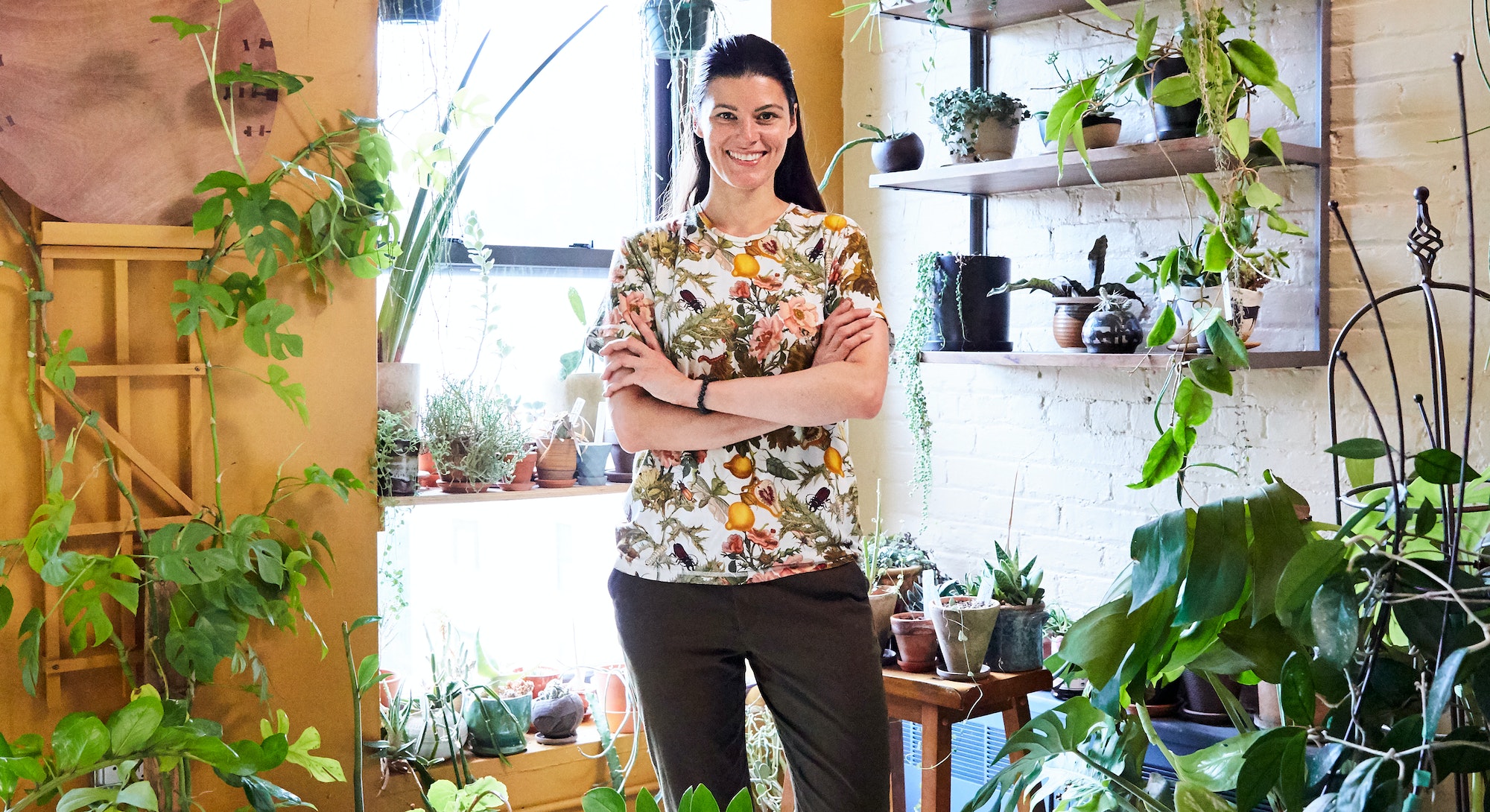 In Be My Guest, Bustle takes you inside cool homes so you can gather design and decor inspo for yourself. Here, step inside the stunning, plant-filled apartment of Summer Rayne Oakes, author of How To Make A Plant Love You: Cultivate Green Space In Your Home and Heart.

As soon as I walk through the bright blue door of Summer Rayne Oakes’ Brooklyn apartment, the author, environmental scientist, and self-described chicken mom asks me to take off my shoes. “Because of the neighbors,” she says. Although the floors of her converted loft are strong enough to support an estimated 1,100 plants, her neighbors can still hear us padding around — a problem that I, with my own Brooklyn apartment, am all too familiar with.

When Oakes, 35, moved in 14 years ago, she didn’t even have a fire escape. (Recently, she tells me, they’ve been updating the building to bring it up to code, at the expense of the window she used for her air conditioner.) She had just graduated from Cornell, and found a middle-aged shiatsu massage therapist from Brazil who was looking for a roommate. She and Oakes lived together for four-ish years until the massage therapist moved back to Brazil, leaving Oakes the place to herself.

“It was really empty and cavernous, which is hard to imagine now,” Oakes says, gesturing at the herb garden mounted on the wall behind her. “It took me a little while to realize the space was mine and that I could do what I wanted with it.” She decided to fill in the space with, at first, one fiddle-leaf fig tree that’s grown from 3 or 4 feet to 10 or 11 feet tall. These days, she keeps something like 500 different species in her place.

“I was trying to push the bar of what usually grows indoors and testing it out, losing some and gaining others,” Oakes says. It takes her about 15 to 20 minutes each day to water every plant with the help of a 150-foot hose, and she spends around eight hours every Sunday doing the hardcore maintenance — trimming back leaves, repotting, etc.

Around the plants — which cover every available flat surface, including the walls, with some suspended from ceiling beams in ‘70s-style macramé hangers — a mix of vintage furniture and handicrafts fill out the space. Oakes says a lot of her furniture comes courtesy of her dad, a retired truck driver who spends his time antiquing around the northeast. “My dad is always just like, 'You see this drill? 10 cents,'” she says. The kitchen table I’m interviewing Oakes at, with hand-painted flowers on each eave? $38 at a church auction. The solid oak captain’s chairs we are sitting in? Free, nabbed when her dad’s union closed up. As we walk around her apartment, she points out various bookshelves (vintage), armoires (vintage), end tables (street find), and trellises (Home Depot), each flowering over with as much vegetation as one can physically pack into the space. The planters, she buys at local hardware shops, or on Etsy; she will also visit local ceramicists when she travels, and pick their vessels up as souvenirs. “Everything is kind of ramshackled together here,” Oakes says.

Some of the apartment’s homey touches are left from Oakes’ original roommate; she points out the red wall behind her built-in couch, with a nesting area for her foster chicken, Kippee, and the white fringed hammock suspended from two wooden support posts in her massive living area. “I had the same hammock that she had, but it was used so much that eventually you ripped right through it,” Oakes says. She ordered another one online.

Oakes is the rare Instagram-famous figure — "influencer" seems like the wrong word to use here — who truly isn't doing it for the 'Gram. Oakes has 106,000 followers on her Instagram @homesteadbrooklyn, and another 135,000 on YouTube, where she hosts a houseplant masterclass and a series called "365 Days of Plants" — all in service of making it easier for her followers to identify and care for the plants Instagram may have encouraged them to buy. Although her lifestyle seems eminently enviable, Oakes draws on her training as an environmental scientist to build an urban naturescape indoors, despite the obstacles. Where some would look at the antique tables covered with plants and clutch their pearls over the inevitable watermarks, Oakes says "the stains here and there are worth it" to have such unique, vintage pieces — though she tries to be "as careful as possible" when watering.

Her home first went viral around 2016, when the publication Modern Farmer came to take photos of her worm composting unit; obviously, the photographer instead focused on the 750-ish plants Oakes says lived there at the time. But she was immersed in this world way before the internet caught on. "I can tell you for a fact that if I wanted to do plant stuff 10 years ago, or write a book when I’d started growing plants from a professional standpoint, I don't think people would have had the same interest [as they do now].”

One reason her apartment resonates so strongly today could be because of the current plant zeitgeist, which Oakes acknowledges is at least in part stoked by Instagram. (And indeed, enough has been written about the millennial plant mom phenomenon that I don’t need to unpack it here.) But where plenty has been said about how social media has been used to disconnect us, to tether us to our individual “little rectangles,” as Oakes says, she also sees it as a powerful tool for cultivating community.

“A lot of people have emailed me and said, ‘I thought I was strange for having like, 10 plants,’” she says. “I'm not an introvert, but I know a lot of people who keep plants are introverted, the fact that they can express themselves with plants, with other like-minded people … is something that the plant community really has. You can't just say it's a millennial thing.”

And in her most recent book, How To Make A Plant Love You: Cultivate Green Space In Your Home and Heart, the emphasis is not on the tactical plant care that, Oakes acknowledges, many of her followers likely expected. Rather, it’s about cultivating intentional relationships with your plants, your space, your community, and yourself through a deeper connection with nature, as an antidote to a society that often devalues these kinds of long-term connections.

“It's the journey of keeping one plant alive," Oakes says. "It's a journey of losing some. All of that stuff makes the routine and the ritual of it the rewarding part, not having 1,100 plants” that can be Instagrammed for plant mom clout, or whatever. “If you’re just [buying plants] for the Instagram photo or the décor item, you’re not going to get that."

"The fact that I wake up in the morning and I take care of my plants, the fact that I reserve my weekend for my plants and not for work or anything like that, that then becomes my lifestyle,” Oakes adds. “Ten out of 10 people that I meet who say they want a chicken — they want to hold it, but they don’t want to clean up their poop. At the end of the day, it’s about showing up for yourself first, and then showing up for everything else that you say that you want. If you want to have the community that you want to live in, you actually have to show up.”

Whether that community is you and your roommates, or your neighborhood garden plot, or your city, plant care shows us what happens when we put love toward the things we care about.

“Plants create the community that they want to live in. And so do you.”