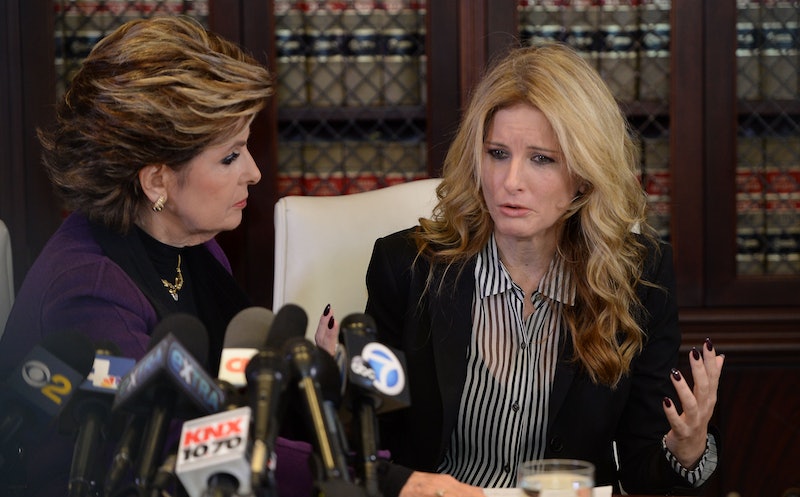 Just three days before his presidential inauguration, Summer Zervos announced that she is suing Donald Trump for defamation. Zervos is represented by Gloria Allred.

Trump responded to a slew of allegations of sexually violating behavior during the campaign, describing his accusers as "horrible liars," and insisting "the events never happened," blanket denials which were considered in Zervos' lawsuit.

He also threatened to sue them after the election, although he's made no further comment on that since winning the presidency. Here's what he said to a rally crowd in Gettyburg, Pennsylvania in October:

Every woman lied when they came forward to hurt my campaign. Total fabrication. The events never happened. Never. All of these liars will be sued after the election is over.

In the final months of the 2016 presidential election, when the stakes were at their highest, Trump suffered what many believed to be the final deathblow to his campaign. Namely, he was accused by nearly a dozen women of non-consensual groping and sexually predatory behavior, precisely the kind of thing he boasted about in the explosive Access Hollywood tape that was exposed in early October.

Allred, 75, is a famous American attorney who promotes herself specifically as a "feminist lawyer," taking up cases in service of women who allege discrimination or abusive behavior by powerful men. Back in 2012, she represented Sharon Bialek, a woman who accused GOP primary candidate Herman Cain of sexual harassment. She also represented more than one of the Trump accusers, along with her daughter, attorney Lisa Bloom, who represented others.

If Zervos' name sounds familiar, it's because you've heard it before. She was one of the many women who spoke out publicly prior to Election Day, alleging that she was the subject of unwanted sexual touching and kissing by Trump. Now she's filing a defamation lawsuit over Trump's public, vociferous denials, which crossed from simply asserting his innocence into asserting that his accusers were "horrible liars."

Zervos made clear in her statement that she would immediately rescind the lawsuit, provided that Trump would withdraw and correct his remarks about his accusers. She also made clear that she would not seek any financial reward if he did so. When asked why the suit has been filed this week, just days out from the inauguration, Allred noted that she'd raised the prospect of a defamation lawsuit months earlier, and that Trump had not taken any action to change his statements. "Today's the day," Allred said. "It's time to face the consequences."

Back when Zervos first raised her allegations against Trump in October, he released the following statement, both about Zervos and Allred, according to the Boston Globe:

I vaguely remember Ms. Zervos as one of the many contestants on The Apprentice over the years. To be clear, I never met her at a hotel or greeted her inappropriately a decade ago. That is not who I am as a person, and it is not how I’ve conducted my life. In fact, Ms. Zervos continued to contact me for help, emailing my office on April 14th of this year asking that I visit her restaurant in California.

Beyond that, the media is now creating a theater of absurdity that threatens to tear our democratic process apart and poison the minds of the American public. When Gloria Allred is given the same weighting on national television as the President of the United States, and unfounded accusations are treated as fact, with reporters throwing due diligence and fact-finding to the side in a rush to file their stories first, it’s evident that we truly are living in a broken system.

Allred finished her press conference by announcing that she and Zervos would be present at the Women's March on Washington on Jan. 21, 2017, along with other Trump accusers (although Allred did not name them individually).

More like this
Are John Legend & Kanye West Still Friends? The Singer’s Latest Update Is Candid
By Brad Witter
Beyoncé & Madonna’s “Break My Soul” Remix Honors A Group Of Black Icons
By Stephanie Topacio Long
'Scream’s Courteney Cox Has Broken A Major Horror Record
By Sophie McEvoy
Kim Kardashian & Pete Davidson’s Relationship Timeline From Start To Finish
By Jordyn Tilchen and Bustle Editors
Get Even More From Bustle — Sign Up For The Newsletter