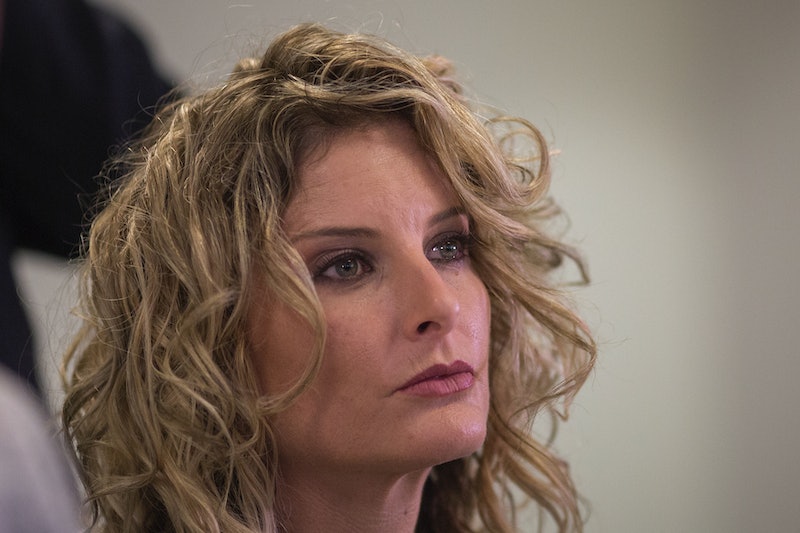 A New York appellate court ruled Thursday that Summer Zervos' defamation lawsuit against President Trump will move forward, despite the White House's objections. The ruling increases the odds that Trump will have to give a sworn testimony while president.

Zervos, a former Apprentice contestant, alleges that Trump forcibly groped and kissed her in 2007. Trump denies this and all of the sexual assault allegations made against him, but when he called Zervos and his other accusers "liars," Zervos sued him for defamation.

The White House has tried to get the case dismissed, arguing that a state court shouldn't be allowed to try a sitting president. But the courts have disagreed, and in the latest setback for Trump, a panel of the New York Supreme Court Appellate Division ruled Thursday the president can indeed stand trial. The panel cited the 1997 Supreme Court case Clinton v. Jones, in which the nation's high court unanimously ruled that the sitting president — in that case, Bill Clinton — does not have absolute immunity from civil litigation. The majority of the panel wrote in its decision:

Contrary to defendant’s contention, Clinton v Jones did not suggest that its reasoning would not apply to state court actions. It merely identified a potential constitutional concern. Notwithstanding that concern, this Court should not be deterred from holding that a state court can exercise jurisdiction over the President as a defendant in a civil lawsuit.

Zervos' lawyer Mariann Wang applauded the decision, saying in a statement that she and her client "look forward to proving to a jury that Ms. Zervos told the truth about Defendant’s unwanted sexual groping and holding him accountable for his malicious lies."

Two of the five judges on the panel disagreed with the majority's ruling, concluding in their dissent that a president should be immune in state court. Trump's attorney Marc Kasowitz applauded the dissenting judges, saying in a statement that they are "correct in concluding that the Supremacy Clause of the U.S. Constitution bars state courts from hearing cases against the President while he or she is in office."

But the other three judges on the panel felt otherwise.

"We reject defendant President Trump’s argument that the Supremacy Clause of the United States Constitution prevents a New York State court — and every other state court in the country — from exercising its authority under its state constitution," Judge Dianne Renwick wrote in the majority opinion. She noted that the Supremacy Clause — which generally states that federal law trumps state law when there's a conflict between the two — didn't shield Trump from Zervos' lawsuit, because in this case, there was no contradiction between state and federal law.

As The Washington Post notes, the decision in Thursday's case will also affect a separate lawsuit involving Trump. New York Attorney General Barbara Underwood sued the Trump Foundation and its board of directors — specifically, Ivanka Trump, Donald Trump Jr., Eric Trump, and the president himself — for what she called "extensive and persistent violations of federal law" in 2018. Trump denied having done anything wrong but shuttered the foundation later that year.

As in the Zervos lawsuit, Trump's lawyers had attempted to get that case dismissed by arguing that a president is immune from prosecution in a state court, The Post reports. The judge in that lawsuit said that if the ruling in the Zervos case went in Trump's favor, she would dismiss the case against the Trump Foundation. Thanks to Thursday's ruling, that's now unlikely to happen.

The Post reports that Trump's team will appeal the decision in the Zervos case to the New York Court of Appeals.