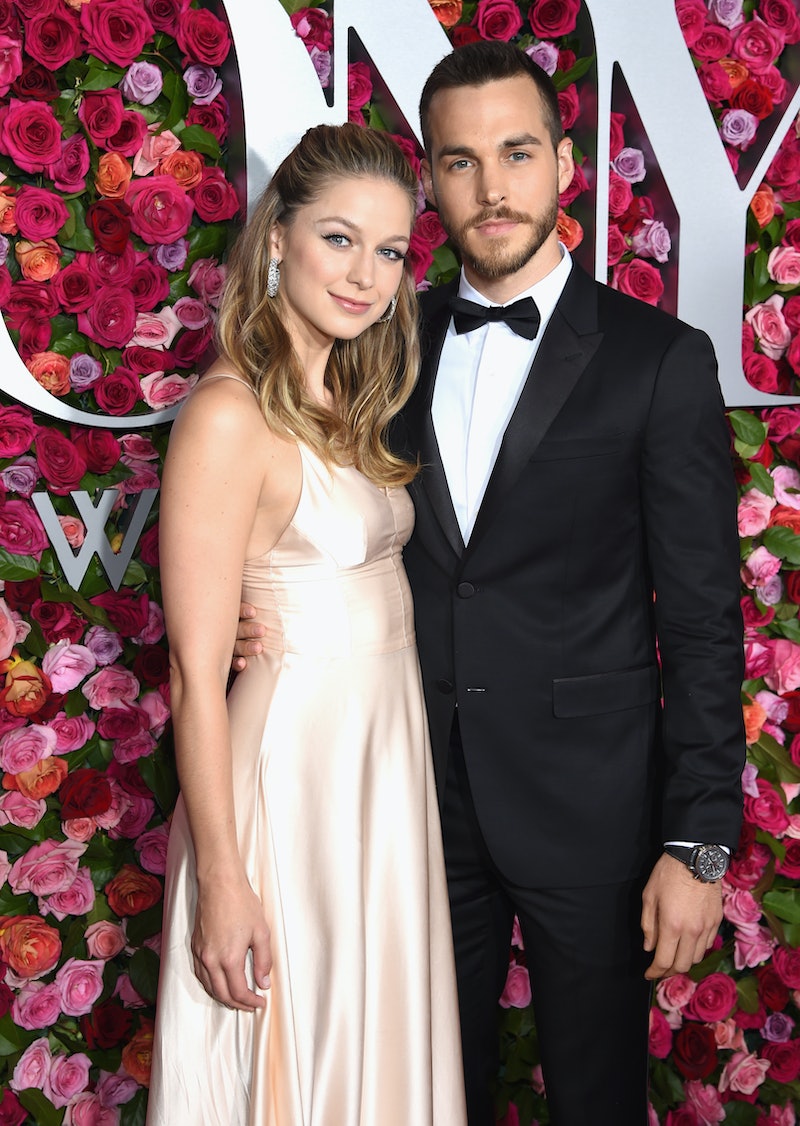 Things might not have worked out between Kara Danvers and Mon-El, but the same certainly can't be said for their real-life counterparts. Supergirl stars Melissa Benoist and Chris Wood got married over Labor Day Weekend, according to multiple reports, which means that these two actors are officially off the market. E! News reported that the duo tied the knot on Sunday, Sept. 1, while surrounded by close family and friends, which included several members of their CW family, such as Kevin Smith, Odette Annable, and Paul Wesley. Bustle reached out to representatives for Benoist and Wood, but had not received a response at the time of publication.

"It was a beautiful setting for a wedding very peaceful and quiet," a source told the outlet about the couple's special day, which apparently took place at a private estate in Ojai, California. "The vows were brief and lasted about 15 minutes. There was lots of cheering and applause as it ended." A reception immediately followed the ceremony and proved to be equal parts tasteful and elegant. "There were lots of glowing candles and lights strung above," the insider explained to E! News. "The food was served family style and everyone passed the dishes back and forth." The source added: "It looked like an elegant outdoor dinner party. There was a lot of laughter and happiness."

One could go so far as to say it was fitting for the likes of on-screen superheroes such as themselves.

Supergirl was where Benoist and Wood initially met. They played each other's love interest shortly after Wood joined the cast in 2016 and ultimately it seemed that life began imitating art at some point down the line. They were photographed kissing during a trip to Cancun, Mexico back in March 2017. They had yet to publicly confirm their relationship at that point, though an eyewitness told E! News at the time that the actors "kissed passionately several times" and "appeared to be in their own world," adding that "They didn't appear to care who watched their passionate embraces."

From there, the rest is history. They announced their engagement back in February via their social media accounts. Benoist captioned her post with ""yes yes yes it will always be yes," alongside a photo of her rocking a beautiful diamond ring as Wood kisses her cheek. Meanwhile, Wood posted the same photo, but with a different caption that read: "The happiest." And now, six months later, the two of them have apparently made their love official.

Prior to their relationship, Benoist was married to her former Glee costar Blake Jenner in 2015. However, Benoist filed for divorce just three years later in late 2016 and it was finalized in 2017. This will serve as Wood's first marriage, though he has previously been romantically linked to his Containment costar Hanna Mangan Lawrence.

The reported newlyweds have yet to post any photos from their wedding day, but that's sure to happen eventually. They're probably just too busy celebrating and enjoying each other's company right now to be bothered with social media postings. Either way, their union is definitely a cause for celebration.