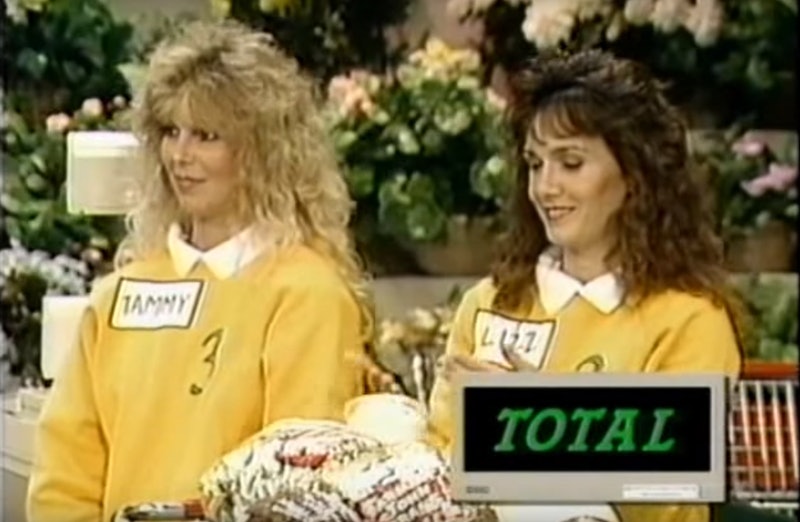 Prepare to run through the aisles and fill your shopping cart up with joy, because Supermarket Sweep is returning, and it's the TV show we never knew we needed back in our lives. According to an E! report, the classic game show has yet to be picked up by a network, but it's only a matter of time until someone snaps it up, right? This has to happen, you guys.

The show originally aired in the late '60s, however you definitely remember Supermarket Sweep from the shows revivals in the late '90s (on Lifetime) and early '00s (on PAX). Combining all the fun of a quiz show with all the breathless zeal of racing an opponent in a grocery store and fighting over canned goods, the beloved show was a quirky treat. And according to some very important people involved in the redevelopment of Supermarket Sweep, now is apparently the perfect time for its return.

Vasha Wallace, the executive vice president for Supermarket Sweep's new distribution company, said in a statement to E!, "Modern technology allows us the opportunity to update the show, making it relevant for a 21st century audience," which honestly sounds thrilling. Especially if there's robots involved (please let there be robots involved).

Meanwhile, Henry Howard, son of Supermarket Sweep's creator, Al Howard, made a bold statement and told E!, "On this show, there are no losers—only shoppers having a great time." This is possibly the sweetest statement anyone has ever made about a quiz show in our lifetime. So, it's fine if you just shed a solitary tear reading that.

If you were a kid who grew up enjoying the show, then you likely spent a whole bunch of time dreaming about the day that you could step foot in that grocery store, yourself. This news obviously provides the opportunity for that, but at this stage in our lives, we're also pretty much total pros at the requirements necessary to ace this thing.

Though the show followed traditional quiz structures in testing the knowledge of three teams of contestants, it also came with the added bonus of allowing people to use their shopping prowess to win some hot cash prizes. The only real edge you could get over your opponents was to shop savvier and faster than them while laughing manically at the speed of your tremendous intellect. Which for most of us is called a Saturday, so we're totally prepared already to win this thing.

There were some other signature parts to what made the show so great that you might want to remind yourself of, too, though. There was, as the GIF below illustrates, for example, a certain struggle in the items you were expected to dash for and what the average human was capable of actually carrying.

There was the perverse joys of being forced to wear matching pastel sweaters with someone you loved:

The very real dangers of going too hard on a shopping cart to make those final seconds count — and almost completely destroying yourself on TV in the process.

And, as this Twitter user points out, the fact that there was no real system to winning the show. But there also totally was (he's right about those hams).

Things might be feeling a little less than great in our country right now, but we can likely all agree that TV can at least become great again with the reintroduction of this iconic show. Especially now that we're all old enough to compete on it. See you down the final aisles for an all-or-nothing trolley dash, ladies and gentlemen.