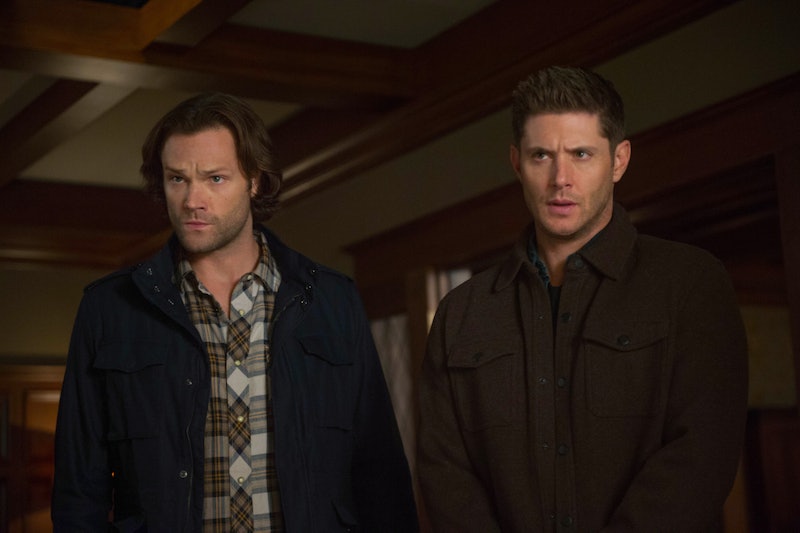 All good things, even favorite TV series, must come to an end. That's the new reality for fans of the CW series, Supernatural. It was announced on Friday that Supernatural will end after Season 15 — and fans are having a bit of a moment. The hit show starring Jared Padalecki, Jensen Ackles, and Misha Collins premiered in 2005 and instantly acquired a cult following. But after 14 seasons, the three stars announced on Twitter that its next season will be the last.

In an emotional message, Ackles delivered news of the series' departure.

"We just told the crew that though we're very, very excited about moving into our 15th season, it will be our last. 15 years of a show that has certainly changed my life, I know it's changed these two guys' lives, and we just wanted you to hear from us that though we’re excited about next year, it will be the finale, the big grand finale of an institution."

Supernatural did become an institution for legions of fans, making the series one of the longest running sci-fi TV shows of all-time. Padalecki echoed his co-star's sentiment with noticeable feeling. "We've cried some tears and we'll cry some more, but we're grateful and we're going to work all that emotion into next season," Padelecki promised.

Fans of the show are already feeling several emotions about the ending of an era, taking to Twitter themselves to commiserate. After 300 episodes spent with the Winchester Brothers, fans are naturally attached. News of a goodbye is hitting several hard, as many reflect on the role the series played in their lives over the last 15 years.

For some, news of the show ending is so much to process, that for now only tear-filled gifs, photos, and memes will do. We've all been there.

Other fans are on the road to acceptance, sharing gratitude for the team at Supernatural who made their favorite show possible. Acknowledging how hard it is to part ways with a beloved series, a commitment to Supernatural's fandom is a recurring theme.

As fans cope with the looming end of Supernatural, it's evident that those involved with the series are right there with them. Shortly after the Twitter announcement that the show was ending, Padalecki posted a heartfelt Instagram throwback with co-star Ackles. His message is to doubt providing solace to the series' fandom.

Dear #spnfamily , Season 1 @jensenackles and I want you to know that next season, SEASON 15, will be the last season of #supernatural. I am so incredibly grateful for the family that we’ve all built together. I love y’all and am more appreciative of y’all than my meager vocabulary could hope to describe. I’m also typing through tears. So, please forgive me. ‘Til next time. #WinchestersNeverDie

Fans and stars alike are pouring one out for Supernatural. Based on the outpouring of love for the show, Season 15 is sure to be a final season to remember, and a worthy sendoff for loyal viewers.

More like this
Nicola Coughlan Shared A Lady Whistledown Excerpt From ‘Bridgerton’ Season 3
By Grace Wehniainen, Alyssa Lapid and Sam Ramsden
A New 'And Just Like That' Table Read Pic Confirms A Key Character's Return
By Jack Irvin and Grace Wehniainen
Everything To Know About 'RHONJ' Season 13
By Brad Witter and Jake Viswanath
The 'Bachelor In Paradise' Schedule Shifts To 4 Hours Every Week After The Season 8 Premiere
By Brad Witter
Get Even More From Bustle — Sign Up For The Newsletter