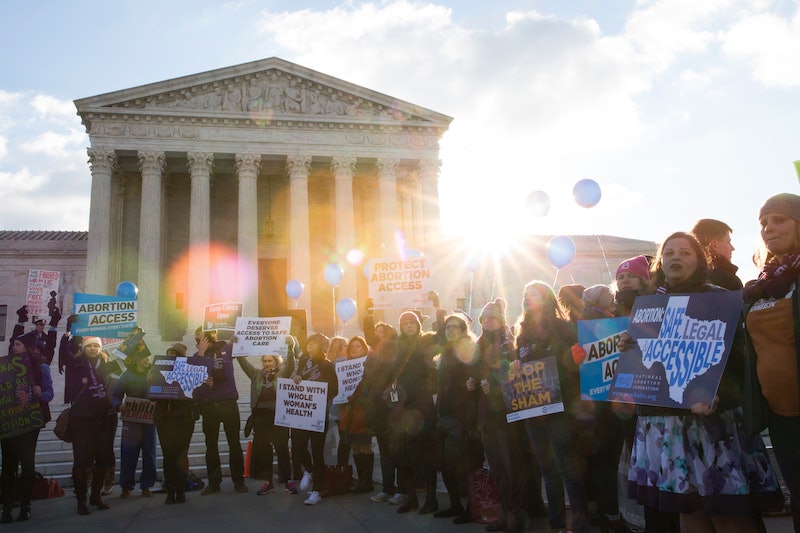 Immigration issues have taken center stage for much of the Trump administration, and now one of the most gripping human stories to come out of all of the policy disputes has come to a close. After a long wait, the Supreme Court erased the undocumented teen abortion court ruling that allowed her to undergo the procedure.

Back in October 2017, The Texas Tribune reported that the U.S. Court of Appeals for the D.C. Circuit ruled that the teen had to be immediately allowed to have the abortion that she was seeking. Jane Doe was in custody of the Department of Health and Human Services and the Office of Refugee Resettlement, both of which refused to take Doe to get an abortion before the 20-week legal limit in Texas, The Tribune wrote. The court ruled in favor of Doe and her ACLU lawyers, even though she had already had the abortion at the time of the ruling.

According to The New York Times, Doe got the abortion earlier than expected because of a change in her doctor's schedule. Following the appeals court ruling, the Trump administration asked both that the case be wiped away because the issue was moot at the time of the ruling, and that the ACLU lawyers who obtained the abortion for Doe be disciplined for their actions. The Times reported that while the Supreme Court did declare the ruling in favor of the teen to be moot, they did not see a reason to punish the lawyers for their actions.

WTVA News reported that what this all boils down to is that even though the lower court's ruling would have meant that any undocumented teen who wanted an abortion would have to be allowed access to one, the Supreme Court's decision to wipe that ruling means that it will not be able to set a precedent. If a similar case comes up again — that is, if another undocumented immigrant teen in the custody of DHHS and ORR wants to have an abortion — the same legal battle that played out around Doe's case will have to play out again.

According to The Hill, the decision to rule the decision moot came on the basis of something called the Munsingwear doctrine, a 1950 decision stating that “a judgment, unreviewable because of mootness, should not be permitted to spawn any legal consequences.” Solicitor General Noel Francisco, according to The Hill, claimed that the case was moot because the teenager had already had the abortion at the time of the ruling.

According to The Washington Post, the Trump administration has not been allowing undocumented teenagers in its custody to have access to abortions, even though the right to have an abortion is constitutionally protected under Roe v. Wade. This decision means that they continue to carry out this policy, unless another legal challenge makes its way through the justice system and is ruled in favor of the teen seeking an abortion quickly enough so as not to become moot.

The BBC wrote back in October that no undocumented teen held in federal custody would be allowed to have an abortion without getting written authorization from E. Scott Lloyd, the very anti-abortion director of the Office of Refugee Resettlement. According to Vice, Scott Lloyd has referred to abortion as “violence that has the ultimate destruction of another human being as its goal” and has discussed the possibility of leading teens to "reverse" their abortions before the process was complete by using the hormone progesterone. This procedure, Vice reported, has not been studied enough to say if it works, or indeed if it is harmful for the women who undergo it. Thanks to this Supreme Court decision, Scott Lloyd will still be able to block abortion access for the teens in his office's custody.