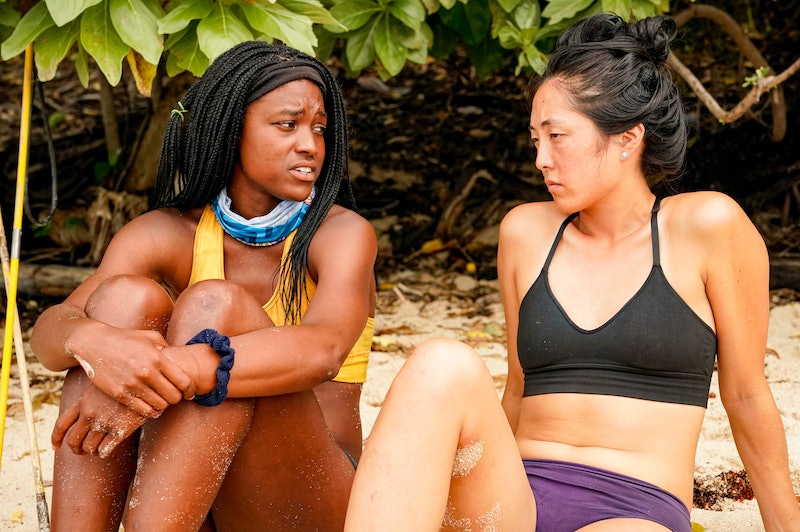 This week's episode of Survivor: Battle of the Idols was more complicated than fans could have anticipated. Survivor's #MeToo moment has garnered both sympathy and controversy from all ends. As part of a double episode that aired on Wednesday, Nov. 13, Kellee Kim once again expressed discomfort with the way that fellow contestant Dan Spilo allegedly kept touching her and violating her personal space, causing producers to interfere in a way they never have before. Bustle reached out to Dan Spilo for comment, but have not yet heard back.

During a confessional interview, Kellee made it clear that Dan's inappropriate behavior was unacceptable and affecting her time on the show. Her emotional comments about her and and other women's experiences with Dan led to an off-camera Survivor producer interrupting her interview to ask if she wanted them to step in. "If there are issues to the point where things need to happen, come to me and I will make sure that stops," a producer could be told telling Kellee, per E! News. "Because I don't want anyone feeling uncomfortable."

As noted in a joint statement form CBS and MGM obtained by Bustle, producers ended up speaking with both the entire cast and Dan individually, giving him an official warning about his unwanted actions. They also assured fans that castaways had the full support of producers, saying in part, "All castaways are monitored and supervised at all times. They have full access to producers and doctors, and the production will intervene in situations where warranted."

The situation could have been diffused then and there. Instead, it went to a whole new level when contestants Elizabeth Beisel and Missy Byrd concocted a plan to exaggerate and fabricate stories about how Dan made them both uncomfortable so that he would become a target. Elizabeth even said on camera that Dan had not made her uncomfortable, though Kellee had no idea.

During the Tribal Council meeting, Dan apologized to his fellow contestants for his behavior. "My personal feeling is if anyone ever felt for a second uncomfortable about anything I’ve ever done, I’m horrified about that and I’m terribly sorry,” he said. And, in a shocking moment, Dan was allowed to stay in the game, and the castaways voted out Kellee instead.

On an unverified Twitter account, Kellee spoke out about the ordeal, saying that she was "hurting" while watching the episode and asking viewers to not threaten or shame anyone. Other contestants, like Elizabeth, Janet, and Dan, have not publicly commented on the episode.

Of course, fans were not thrilled by the outcome of the episode, and the Twitter backlash was swift, with viewers expressing anger at both Dan's alleged behavior and Elizabeth and Missy's actions. But, while many on Twitter were ready to cancel Elizabeth and Missy for appearing to turn a serious allegation into a game strategy, host Jeff Probst said that the women's differing experiences is what makes this the perfect teaching moment.

"This is a precise microcosm of what happens in the workplace," Probst said, adding that he hoped viewers took this entire situation as a lesson of what behavior might make others uncomfortable. "We must use this as an opportunity to examine ourselves and how we handle these types of situations." Regardless of what fans take away from this unfortunate scenario, it will likely affect the rest of the season in a huge way.