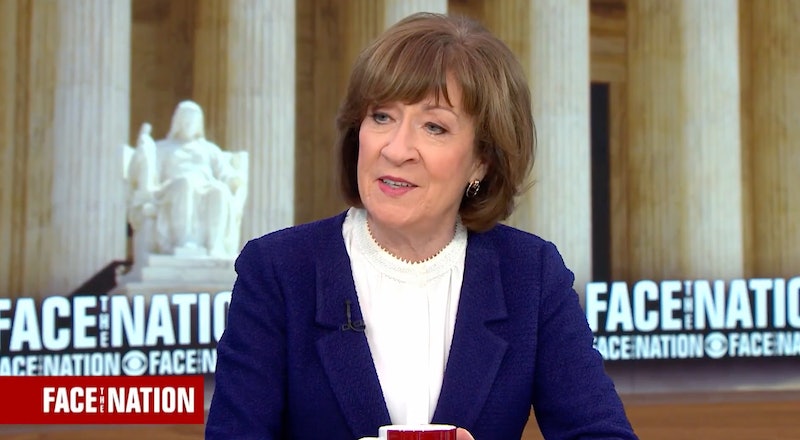 As a part of her weekend media tour to explain her vote to confirm Brett Kavanaugh to the Supreme Court, Republican Maine Sen. Susan Collins said Kavanaugh's confirmation had a "silver lining." During an interview with CBS's Face The Nation on Sunday, Collins said the confirmation hearings caused her "huge pain" but that "women have the right to be heard."

"They have the right to be treated with respect. And I think one of the tragedies of what we've just gone through is Christine Blasey Ford wanted to have her allegations treated confidentially," Collins told host John Dickerson, adding that she met with "many survivors" of sexual assault before the vote. "She did not seek the limelight."

Ford accused Kavanaugh of an attempted sexual assault while they were both in high school in the 80s. Kavanaugh denied the allegation. At the end of September, Ford (and Kavanaugh) testified in an emotional hearing in front of the Senate Judiciary Committee.

Collins said Ford's "whole life has been turned upside down" by her public testimony. "I think that was wrong and despicable," she told Dickerson. But the entire situation has a positive, she said.

"The one silver lining that I hope will come from this is that more women will press charges now when they are assaulted," Collins said.

In response, Dickerson asked Collins how she arrived at her conclusion and if she had evidence for discounting Kavanaugh's involvement. Collins said she believed that Ford was a sexual assault survivor.

"But we have a presumption of innocence in this country, and when I looked at the lack of any corroborating evidence, including no evidence from her very best friend who was present at the party, I could not conclude that Brett Kavanaugh was her assailant," Collins told Face The Nation.

Dickerson also asked Collins if she was worried about women's fears they wouldn't be believed if they did report. "I certainly don't believe that's the case because I think that this has been an awakening for this country," Collins said on Face The Nation.

Then, Collins added: "I don't think most of us had any idea how pervasive the problem of sexual assault is. Sexual harassment, yes we knew that. But sexual assault. And that's why the Me Too movement has been important."

The senior senator from Maine said fairness is the most important part. "That's why it's been important that so many of these women for the first time ever have come forward. And it is important that we treat people fairly," Collins said. "And that's what we need to do."