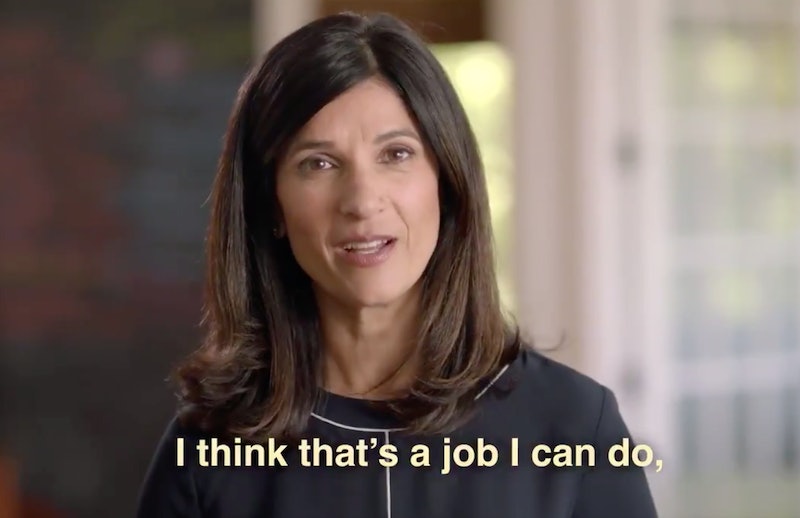 A third Democrat has put her name forward in the race to unseat Maine's four-term Republican senator. Maine House Speaker Sara Gideon will challenge Susan Collins in the U.S. Senate, she announced Monday in a video that not only criticized Collins' actions in the Senate but touched on how she got her start in politics. Interestingly, the latest challenger to Collins' Senate seat got into politics after someone tried to recruit her husband for public office.

"It all started with one of these," Gideon said as she holds up an answering machine in an ad announcing her campaign. "I pressed that blinking answering machine button and heard a message left for my husband Ben. It said they knew he was probably too busy with work but would he consider running for the town council? I thought to myself, actually, I think that's a job I can do and somewhere I could make a difference, so I ran for that office, and won."

Gideon ran unopposed for a seat on the Freeport Town Council in 2009, according to The Portland Press Herald. She later served as the council's vice chair before running for the Maine House of Representatives in 2012.

In a June 2018 Q&A published in State Legislatures Magazine, Gideon said her run for a town council seat was a "compromise" she made with herself after being unable to find a way to make returning to her previous job work for her family. "When my children were born, I stayed home with them," she said. "During those years, I couldn’t figure out a way to go back to work and make it work for my family. My compromise to myself was to run for a town council seat."

But, as Gideon tells it, public office turned out to be a great fit for her. "I found I was decently good at it," she told State Legislatures, adding she found identifying challenges and problems and then bringing people to the table for solutions to be "the most fascinating and fulfilling work" she could imagine.

What's more, Gideon's story of winning the seat her husband was initially recruited for appears to have struck a chord with some. "Maybe the best use of a political husband I've ever seen: they wanted him to run, and I did it instead," editor Chloe Angyal wrote in a tweet featuring Gideon's campaign ad.

In a series of tweets posted Monday, New York magazine writer Rebecca Traister noted that, "as with many women's past political origin stories, husbands have played a big role in Maine history." Traister briefly outlined the stories of two women — Margaret Chase Smith and Olympia Snowe — who jumped into political careers via seats their husbands had held. "I, like @ChloeAngyal, was happily struck by the 'phone message was asking my husband to run so I decided I should' detail in Gideon's ad," Traister wrote.

After years of trying to build herself a reputation for bipartisanship, Collins recently came under heavy scrutiny from Democrats for supporting Brett Kavanaugh confirmation to the Supreme Court. Gideon joins two other Democratic women hoping to challenge Collins following the state's primary on June 9, 2020: attorney Bre Kidman and former gubernatorial candidate Betsy Sweet.