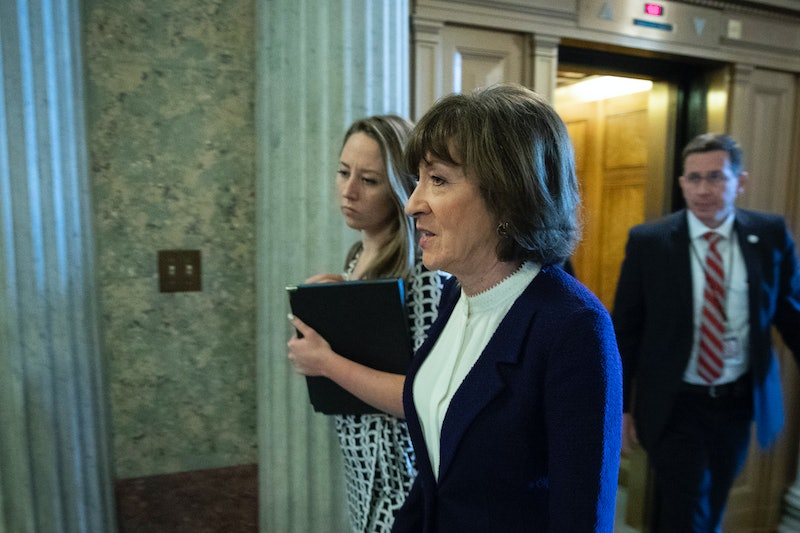 Since President Trump declared a national emergency to build a southern border wall last Friday, Congress and the White House have been barreling toward a fight over the separation of powers. Congressional Democrats have made it clear they will fight the declaration through legislative and legal means, and some Republicans appear to be joining them. Maine Sen. Susan Collins' reaction to Trump's national emergency announcement hints she's taking Democrats' side on this one.

House Democrats, led by Rep. Joaquin Castro, are expected to introduce a formal resolution condemning the national emergency on Friday, as Politico reports. This "resolution of disapproval" is privileged, which means that, should the House pass it, Senate Majority Leader Mitch McConnell is required to hold a vote on it in the Senate. Various GOP members have expressed concerns about the national emergency declaration, including Sens. Marco Rubio, Chuck Grassley, and Lisa Murkowski. Collins is among a handful of Republicans who expressly opposes it.

"I am strongly opposed to the president invoking his national emergency powers," Collins told a local NBC station in Maine on Tuesday. "I don't believe that's what the law was intended to cover."

Should enough Senate Republicans join Collins in voting for the resolution, President Trump could be forced to deliver his first veto on a statement rejecting the national emergency.

National emergencies aren't that unusual — past presidents have used them to implement sanctions on authoritarian foreign countries, address epidemics like H1N1, and respond to attacks like the Sept. 11, 2001 terror strike. But Trump's most recent declaration is different for a few reasons.

The biggest one is that this declaration appears to be more of a policy workaround than a timely response to a crisis. Trump has insisted on funding for a border wall since he took office, but has so far been unable to set up a deal with Congress to appropriate the billions he has requested. After a stalemate with House Democrats over wall funding led to a 35-day shutdown at the beginning of this year, Trump finally backed down and signed a funding bill forgoing wall money.

Then, circumventing Congress, which explicitly refused to provide wall funding, Trump declared a state of emergency. The declaration allows him to reappropriate money from other sources, including military construction funds, the Defense Department's drug enforcement program, and elsewhere, according to CNN.

"I didn’t need to do this, but I’d rather do it much faster," Trump told reporters of his decision at the White House on Friday. "I just want to get it done faster, that’s all."

Earlier this week, 16 states, including Maine, sued the president over the national emergency, arguing that the president does not have the power to appropriate funds Congress, a coequal branch of government, has not signed off on.

"I don't believe that the National Emergencies Act contemplates a President unilaterally reallocating billions of dollars, already designated for specific purposes, outside of the normal appropriations process," Collins wrote in a statement ahead of Trump's announcement last week. "Such a declaration would undermine the role of Congress and the appropriations process; it's just not good policy."