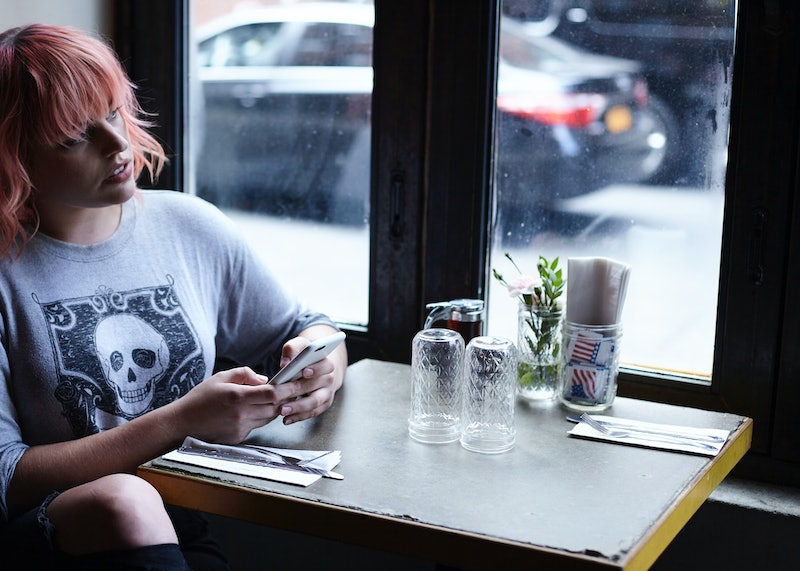 This week, an app launched in Texas that promises to revolutionize Lone Star women's access to birth control. The NURX birth control delivery app helps Texas women circumvent some of the challenges posed by the state's limited number of clinics. And considering nearly half the counties in Texas don't have a single publicly-funded clinic, according to the Guttmacher Institute, NURX arrived not a moment too soon.

The app was first founded in 2015 by two San Francisco-based startup partners Edvard Engesaeth and Hans Gangeskar to help more women fulfill their birth control needs. Despite moves to increase birth control access, including the contraception coverage mandate under the Affordable Care Act, many women still face potential barriers, according to the American Congress of Obstetricians and Gynecologist. NURX aims to tackle the problems caused by lack of access to proper health care providers.

In a phone interview with Bustle, Gangeskar shares how NURX how doctors through their tele-medicine network are available to chat with women online to pick out and prescribe the best birth control for each women's needs.

He adds, "We’re working on making the process as fast as possible, if it comes in the morning we can ship it the same day and you can receive it two days later. In very rural locations, that is three days shipping."

Beyond the convenience and efficiency of the app, NURX also offers two months of free birth control to women without health insurance, making it even more of a life-saver for women without previous access.

"Our goal is to be in all fifty states, so we have a road map for that," Gangeskar, says.

While they regularly receive messages from women in states without NURX, Gangeskar says the onslaught of messages from Texas urged them to prioritize the state. "We got a ton of messages from people, especially from Texas, and we have more nearly 100,000 people on the wait-list from states we’re not in," he says.

Much like the concept of a food desert (an area without a local and accessible grocery store), a contraceptive desert is a county "where the number of public clinics with the full range of methods is not enough to meet the needs of the county’s population, with at least 1 clinic to every 1,000 women in need of publicly funded contraception," according to the National Campaign to Prevent Teen and Unplanned Pregnancies.

There are significant parts of Texas that would fit this definition of a contraceptive desert. As of 2015, 125 out of 255 counties in Texas didn't have a single publicly funded clinic, according to data from The Guttmacher Institute. Another study from The Guttmacher Institute published in 2015 showed that 54 percent of all pregnancies in Texas in 2010 were unplanned.

NURX's expansion to Texas was in some ways serendipitous because it launches as women across the country are facing new concerns about access to contraception. Last month, President Trump signed a "Religious Liberty" executive order, which would pave the way for allowing employers to deny employees' contraception coverage under the umbrella of religious freedom.

Amidst tenuous political terrain, Gangeskar says that he hopes they can help prevent the spread of more contraceptive deserts like Texas.

"We certainly hope that we can continue filling needs," he says. "We already know we’re helping a lot of people. It’s anyone’s guess what the consequence of Trump’s handling of the ACA will be, but I think it’s a pretty safe bet to say there will be fewer community clinics."