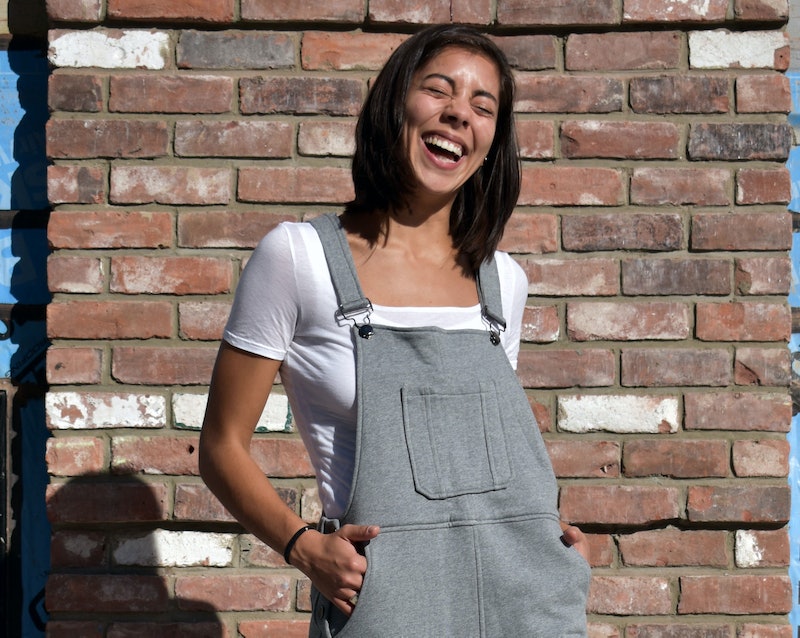 Overalls are a blessing. They're both streetstyle ready and comfy. But one brand wants to raise the ante by transforming your dungarees into literal sweatpants. Swoveralls are overalls made with sweatpant material, giving you a new incognito way to wear your favorite sweats out in public.

Kyle Bergman, the founder of Swoveralls, appeared on Shark Tank on April 23 with his idea. This wasn't just a dream idea that Bergman was pitching — Swoveralls have been around for a year now, and have already made $230,000 in sales.

“Our mission is to create the world’s comfiest apparel using sustainable resources and ethical manufacturing processes,” Bergman said on Shark Tank. “As an athlete, I recognize comfort is a universal concept that everyone understands and experiences, and Swoveralls make that concept accessible, inclusive, and fun.”

The Swoveralls are made with organic cotton and recycled polyester, and they're locally produced in the US. As for the design, the comfy overalls have a jogger-pant cuff with adjustable straps, and snap side-waist closures. The overalls also have side pockets and a hidden inside zipper pocket to store your valuables safely.

The design also comes in a gender-free style, where its neither feminine nor masculine. You can also get the Swoveralls at The Phluid Project, which is the world's first gender-free store.

"Initially, I was trying to solve a problem for myself. Sweatpant overalls didn’t exist, and I wanted a pair! So I created Swoveralls," Bergman shared in a press release.

The overalls are reasonably priced, clocking in at $95. As of right now, they also come in three different color options: black, grey, and navy.

Swoveralls are great for a handful of reasons. First, you will never feel comfier going to brunch or running errands than while wearing dungarees made from soft cotton. Second, if you want to be a slob all day and just lounge around catching up on shows and ordering takeout, you now have an official uniform for doing just that. Rather than wearing faded sweatpants and that one t-shirt with a hole at the collar, you can raise the bar by wearing Swoveralls.

They're comfy enough to hibernate at home with, and cute enough to meet up with friends in. But the biggest appeal of Swoveralls is how genuinely cute it is as a brand. I mean, the logo is a pair of smiling overalls.

The campaign videos also makes you understand the magic of Swoveralls, where all of New York City is decked out in its laid-back overalls. Everyone is dancing, goofing off with friends, and getting into shenanigans while wearing varying colors of the same look. Which makes you realize: you can't actually have a bad day while wearing sweatpants, right?

It seems that many shoppers have had thought the same thing, seeing how Swoveralls has had a 1,500% sales spike since airing on Shark Tank. "I got tons of compliments and a few of my friends have purchased some as well! Just waiting for the black ones to become available," one reviewer wrote.

"So multi-functional. can wear them at the grocery store. On the couch. Walking the dog. Grilling in the cold. Stop reading this review and buy now — so so so buttery soft," another reviewer posted.

Amp up your lounge game with the help of these cute sweatpant overalls. You won't regret it.