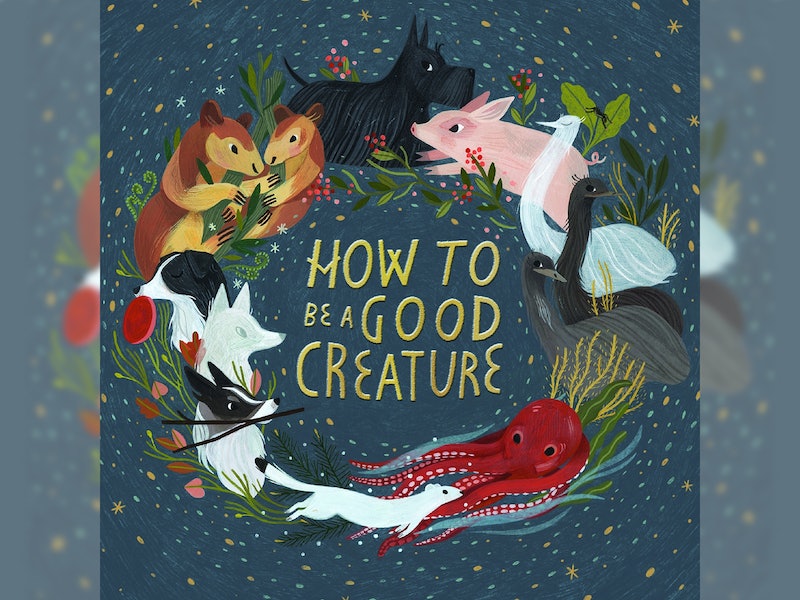 In her exhilarating career as an adventurer, naturalist, and author, Sy Montgomery has befriended dozens of animals all over the world. In her latest book, How To Be a Good Creature, Montgomery, who was shortlisted for a National Book Award for her book The Soul of an Octopus, writes about her relationship with 13 different animals and the lessons she learned from each one.

"There [are] teachers that will help you all around, you just have to recognize them and learn from their truth," Montgomery tells Bustle.

In How to Be a Good Creature, which features illustrations by Rebecca Green, Montgomery explores the bonds she shared with her childhood dog, with the trio of emus she befriended in the Australian Outback, and the pet pig named Christopher Hogwood who helped her find community, among others.

How To Be A Good Creature by Sy Montgomery, illustrated by Rebecca Green, $13, Amazon

It's clear that Montgomery views every creature that she meets as a unique individual, with their own personality, needs, and desires. The animals in How to Be a Good Creature are complex, fully-fleshed characters. So, what helps Montgomery discover an animal's character? "I think just the ability to be quiet, and to listen, and to open your heart. It's just being still," she says.

When she meets a new animal, Montgomery tries to see the world from their point-of-view. "Animals and humans both have emotions, and intuitions. Animals and people both think and feel. We aren't necessarily thinking and feeling the same thing," she says. "For instance, you might like it if I give you a hug now that we've met. But an orangutan does not want you to give him a hug. A tarantula doesn't want you to pick him up by grabbing him on top—that's what a predator does."

In one of the most memorable scenes from the book, Montgomery recalls her first meeting with Clarabelle, a tarantula she discovered living in her quarters while on an expedition in French Guinea. At first, Montgomery was apprehensive about interacting with the spider, but when Clarabelle crawls up Montgomery's arm, something clicks: Montgomery sees her as a small animal, not something to be feared.

"What she showed me is something I carry throughout my life, and that is kind of... enchantment in the ordinary," Montgomery says. "Because, you know, not being a very zealous vacuumer, I have lots of spiders in my life. And they're everywhere! Here's this critter that you can overlook, but it's magnificent. And it sometimes takes an animal like that blown up to a quarter pound and so big it can cover your face to get your attention, to realize how amazing and extraordinary the tiny lives around you everywhere are."

According to Montgomery, being "enfavored by someone from another species" feels incredibly special. "You feel singled out. You feel like an angel chose you to talk to, you know what I mean?" she says. "But the great thing is, I mean, I'm not really singled out. Anyone who is patient can have that special experience...anyone can have this transforming, transcendent experience. And you don't have to have it with an exotic species either. Just think of what our pets can do."