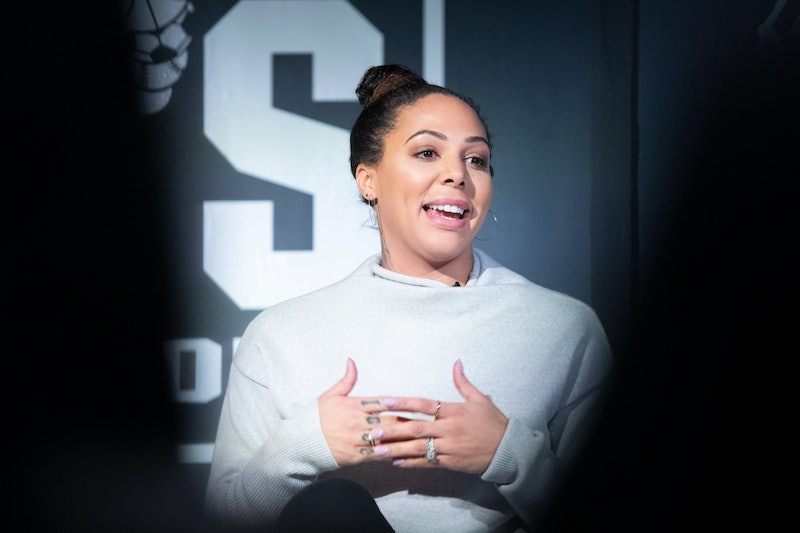 In Bustle's Quick Question, we ask women leaders all about advice — from the best guidance they've ever gotten to what they're still figuring out. Here, soccer star and Olympic gold medalist Sydney Leroux tells Bustle about the unique challenges of juggling motherhood with the demands of professional sports, the best advice Kobe Bryant gave her, and why representation matters.

"Women are expected to do everything — we're expected to keep the kids in line, to keep the house in line, to keep ourselves in line," says Sydney Leroux. "It's just a lot to ask, and especially being in a professional sport, you don't have that time to get all of your ducks in a row." The World Cup champion is talking about the challenges of being a mother of two and playing in the National Women's Soccer League, a topic close to her heart considering the league doesn't have a formal maternity leave policy.

Not that facing challenges is anything new for Leroux. When she became pregnant with her second child, Roux, fans thought she'd miss the entire 2019 season. But the soccer star shared photos of herself training at six months pregnant, and she made her post-pregnancy return to the soccer field three months after giving birth, bursting into tears while she held her newborn daughter after the game.

"We just need a little more support for working mothers not only in professional sports but all across the board," adds Leroux, one of only seven mothers on the NWSL roster. "It makes the home a lot better, and it makes life a lot easier for women, who want to continue to pursue their passion and their dreams."

Leroux recently sat down with Bustle at the "Here for Her" Summit hosted by Dick's Sporting Goods and The Dick's Sporting Goods Foundation and shared how she gets pumped before a big game, how she compartmentalizes her chaotic life on and off the field, and the best advice Kobe Bryant gave her.

With the 2020 Summer Olympics approaching, what's on your to-do list?

SL: Right now, it's about coming back strong after having my daughter. NWSL preseason starts on March 8, so I'm getting ready for that. I'm going to push and see what happens.

How do you pump yourself up before a big game?

SL: The main thing I do is listen to music. I don't really have superstitions, but I always put headphones on and listen to something that helps get me in the zone. The type of music can differ from game to game — sometimes rap, other times slower music.

What do you do when you need to turn off your brain and recharge?

SL: Go to sleep! I get my workout done before the kids are awake and then I start my day. My day starts very early, so that means I can end it early — when the kids go to bed, I get to wind down for the day. I'll read, I'll go on my phone and see what's up, and then do it all again tomorrow.

You turn 30 this year. What advice would you give to your younger self?

SL: Maybe the road isn't going to be exactly how you saw it, but it's going to be worth it. I've gone through so many experiences that I'm like, "Whoa, I didn't expect to see myself here, or I expected to see it differently." But you have to be proud of the entire journey and keep pushing.

What is the best piece of advice you've received?

SL: Kobe [Bryant] told me about living life to the fullest and when things are bad, you push through and you figure it out, and there's no other option. Just living through those words, I think, is really helpful, especially in a time like now. I don't think it's easy, but it's necessary ... Being a woman of color, I didn't see anyone who looked like me growing up. When I was just coming onto the national team, this little girl was crying her eyes out, saying, "You look like me. I look like you. And you make me believe that this is possible, that I can do this." I'll never forget that. It's so important to have people who look like us that we can look up to.