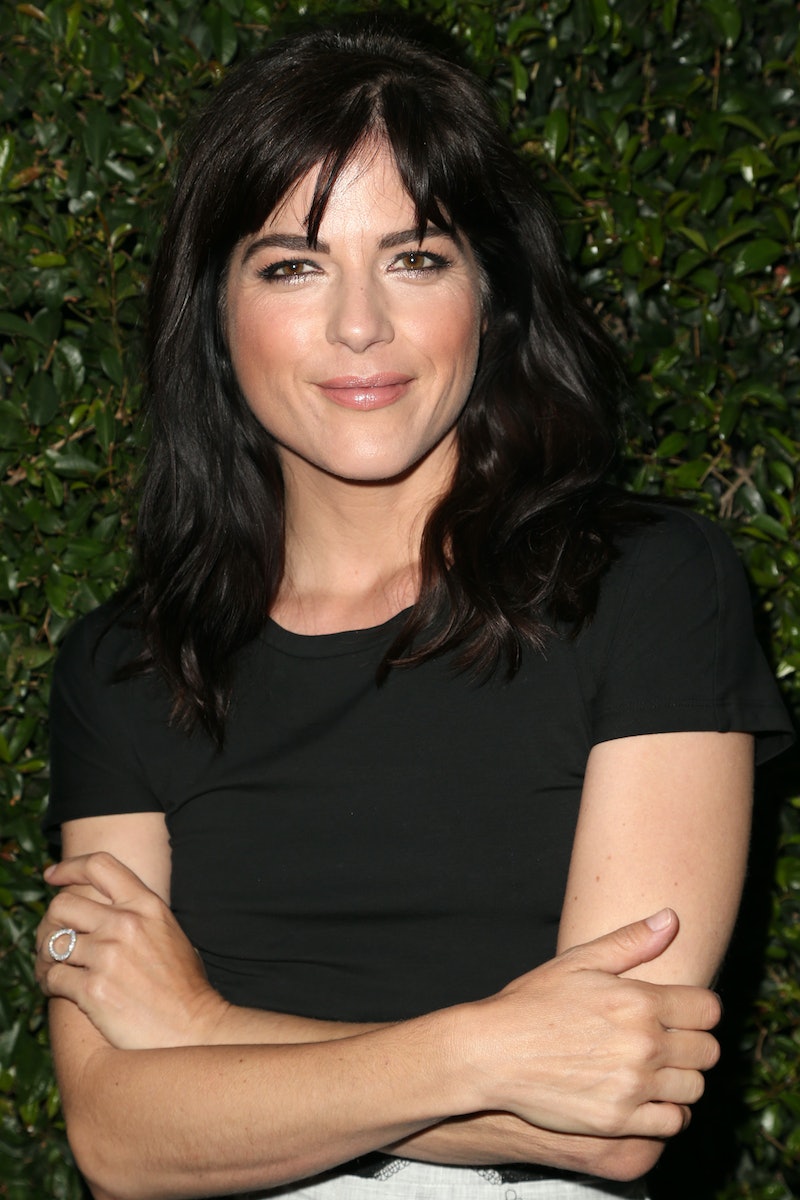 In an emotional Instagram post Oct. 20, Selma Blair revealed that she is among a number of celebrities living with multiple sclerosis, an autoimmune disease that impacts the central nervous system. Symptoms of multiple sclerosis in women can include fatigue, walking difficulties, emotional changes including depression, pain or weakness, among other symptoms, according to the National Multiple Sclerosis Society (NMSS). But while the disease impacts people of all genders similarly, MS is two to three times more common in women, NMSS noted on its website, adding that "recent studies have suggested that the female-to-male ratio may be as high as three or four to one."

"[Multiple sclerosis] is remarkably heterogeneous," Kathy Costello, associate vice president of healthcare access at NMSS, tells Bustle. Most people living with MS are initially diagnosed with Relapsing-Remitting MS, which describes a temporary flare up of symptoms that then remit, Costello tells Bustle. This form of the disease affects around 85 percent of patients, with around two to three female patients for every male patient. There is also Primary-Progressive MS, a steady progression of symptoms that don't wane, which affects 10 percent of those with living with MS (with an equal ratio of male to female patients), and 5 percent are diagnosed with the most debilitating form of the disease, Progressive-Relapsing MS.

Because there isn't a specific test for MS, it can be difficult to diagnose, which can delay treatment. What's more, because there isn't currently an accurate way capture the number of people living with MS, it's not known how many people actually have it. "MS is not a 'reportable' disease, which means that the government does not require physicians to inform any central database when they make the diagnosis. Without this kind of centralized reporting system, there is no easy way to count people with MS," the National MS Society explained.

While MS affects people from all ethnic groups, the National MS Society reported that recent studies found that black women have a higher than previously reported risk of developing the autoimmune disease. A study published in the journal Neurology Clinical Practice found that black people are almost twice as likely to develop MS than other populations. What's more, black women experience a faster progression of the illness, are more likely to relapse, and experience more vision and spinal inflammation issues than other populations living with MS.

Despite these statistics, when Victoria Reese (who now serves as an ambassador for the National MS Society) went looking for other women of color who had also been diagnosed with MS, she had a hard time finding them. Because necessity is the mother of invention, she created a community called #WeAreILLmatic.

"#WeAreILLmatic is a campaign that unites Women of Color who have been diagnosed with Multiple Sclerosis and want to redefine what sick looks like," the community's website described. "So much of the MS community are ashamed of our illnesses and we have no need to live in shame. We may be ill but we are still dope. Why the name? Illmatic is an iconic debut album by legendary rapper Nas. We want to leave a mark on culture like Nas did with Illmatic."

While it's not yet known why the disease tends to be more debilitating among black people, a 2014 study published in The Journal of Clinical Investigation revealed that a protein could be the reason more women than men are affected by MS. In a study of both mice and humans, researchers from the Washington University School of Medicine in St. Louis discovered that women susceptible to MS produce higher levels of a blood vessel receptor protein called S1PR2. The protein is present at even higher levels in the brain areas that MS typically damages.

Once diagnosed, women can work on individual treatment plans with their doctors. Over the past 20 years various medications have been developed to halt the progression of MS in some patients, but treatment and medication can be costly, and it's not always covered by insurance. If you are diagnosed with MS, you're not alone. You can reach out to myriad online communities and in-person support groups. In fact, community just might be the best medicine. A study published in the African Journal of Disability found that just being in an MS group on Facebook, even if you never post a thing, provides emotional support, informational support, and social companionship. With Selma Blair's Instagram post providing much-needed awareness around this disease, it's important to know all that you can about MS.

"It’s brave of anyone to announce any kind of medical condition they have, but it’s so very important to raise awareness, because in raising awareness, it raises interest in research, in contributing to a cause, in the ability of people to feel confident in talking about their own condition," Costello says. "The more people know about MS, the more they can understand yes, there are challenges, but [someone living with MS] can do many of the things, if not all of the things they want to do."