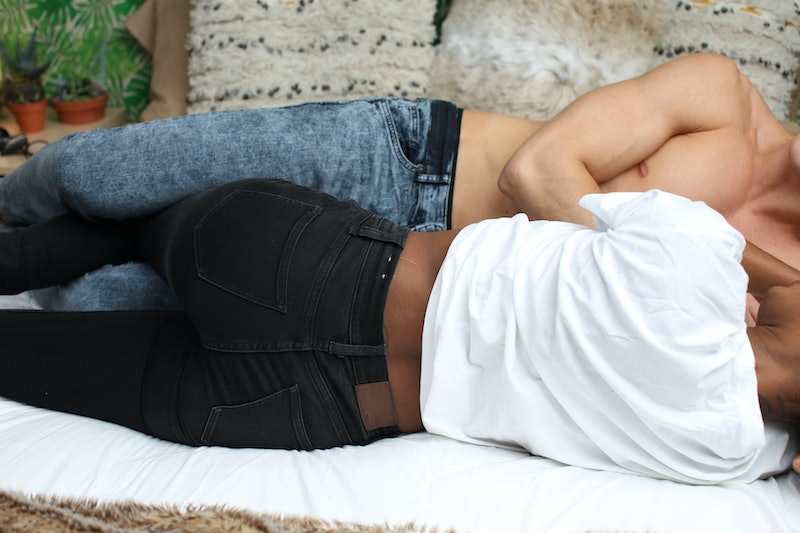 Hormones have a huge impact on your mental health, but soon enough, one the most commons ones may become a treatment option. A synthetic version of oxytocin, aka “the love hormone,” could be used to treat certain mental health issues, according to a new study. The research was published in the journal Science Signaling on Dec. 12, and was authored by Dr. Markus Muttenthaler, a Senior Research Officer at the University of Queensland’s Institute for Molecular Bioscience. Though more research needs to be done, the study has important implications for how treatment for certain mental health issues can be developed.

During their research, Dr. Muttenthaler and his colleagues at IMB developed a new compound — a “synthetic” version of oxytocin — by making modifications to the chemical compound of the hormone. Oxytocin, commonly referred to as the “cuddle hormone” or “love hormone,” is a naturally-produced hormone secreted from the pituitary gland. Known as the “master gland” of the body, this pea-sized organ releases and controls a whole lot of important hormones, including cortisol and growth hormone during adolescence. Oxytocin plays many important roles in the body, and is commonly released by the brain during sex, breastfeeding, when looking at someone you love, bond with them, or cuddle. Though it is produced naturally, injectable oxytocin — called Pitocin — is currently available for pharmacological use. The side effects of Pitocin include nausea, cramping, loss of appetite, stomach pain, and sinus pain or irritation. However, the compound created by Dr. Muttenthaler seemed not to have the same uncomfortable side effects that pitocin has.

Moreover, the researchers tested their new compound on mice, and found that the animals given the new drug overcame social fear and anxiety. Dr. Muttenthaler and his colleagues believe the new version of oxytocin could have therapeutic benefits for people with mental health issues — including those who live with schizophrenia, anxiety, chronic stress, social phobias, and even autism. This research is particularly significant for people with severe mental health disorders, such as schizophrenia, because an estimated 20 to 60 percent of patients with the disorder are treatment resistant — meaning, they are nonresponsive to current antipsychotics and drug available to manage symptoms. Oxytocin is already being tested as a treatment options for various mental illnesses and autism, but the “synthetic” version of the drug may be even better, because it has none of the physical side effects of Pitocin.

In addition to the promising findings in regards to people with mental health issues, Dr. Muttenthaler and his colleague believe the synthetic oxytocin they are developing can be extremely advantageous for pregnant women. Injectable oxytocin is commonly used to induce labor in pregnant women who are close to delivery, but can have some serious consequences.

“The downside to oxytocin is that it activates a number of receptors, some of which can lead to unwanted side effects,” Dr. Muttenthaler explained in the press release from The University Of Queensland. “For example, oxytocin is used to progress labor but it can have serious side effects such as cardiovascular problems or uterine rupture when used for too long or at a too-high dose. The new compound we have developed is just as potent as oxytocin, but shows improved selectivity for the oxytocin receptor, potentially reducing dangerous side effects.”

While the synthetic oxytocin is being tested to treat mental health disorders such as schizophrenia and anxiety, the possible drug is still at the beginning stages of development. Dr. Arianna Di Florio, a psychiatrist at Cardiff University who was not involved in the study, told The Independent, “There is hype because it is a very interesting molecule,” but she added, “there is no robust evidence that supports it in everyday use.”

Hopefully, the discoveries founded by the researchers at University of Queensland will lead to more in-depth studies on the role that synthetic oxytocin could play in the medical treatment in mental health disorders, in addition to labor and delivery. “The new compound is not only a promising lead for future treatments, but also important for understanding the role of the oxytocin receptor in health and disease,” Dr. Muttenthaler said in the press release. “We’re hoping to secure funding to improve the drug properties of this lead and carry out more extensive preclinical studies.”

Though this discovery is new and not fully proven, there is a lot of promise with this new version of oxytocin. The love hormone may not be ready to hit pharmacy shelves just yet, but this study indicates that scientists are beginning to look outside the box to medically treat mental health disorders.