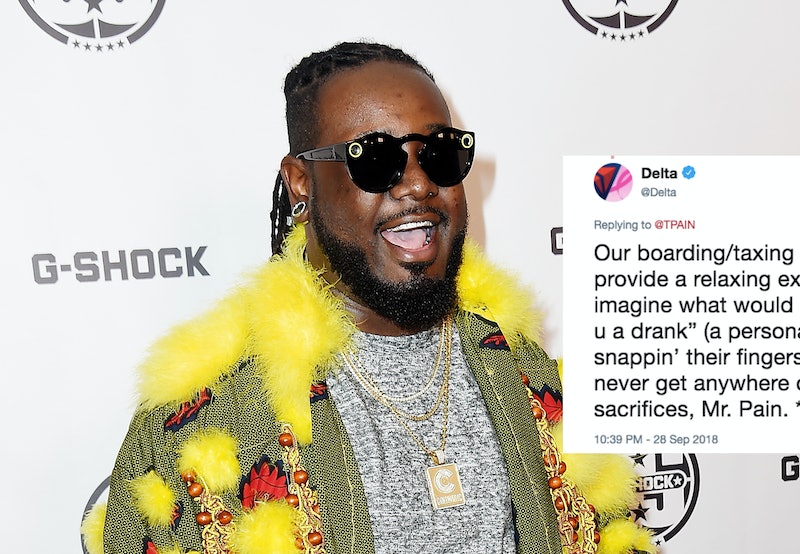 Be careful what you wish for — or, in this case, tweet about. After taking a recent trip with Delta Air Lines, rapper T-Pain tweeted about their unsatisfactory musical selections during the take-off and taxiing stages of his flight. His comment didn't go unnoticed, though, and T-Pain and Delta's Twitter exchange that followed came to a pretty hilarious conclusion, as People reported.

The whole thing started right before the rapper was set to take the stage for a show in Los Angeles. "@Delta we gotta change these boarding/taxiing songs more often guys," he wrote on Twitter. "All of Us Million milers (quick brag) have to hear these same joints multiple times a day. I gotta go perform in the Staples Center in a minute and Adele just put me in the weirdest mood. Now I’m crying. Thanx."

Totally understandable sentiment, to be honest. Adele's music definitely brings on the deepest of the feels, and it's not exactly what anyone would want to listen to when they're trying to get hype. It's more so the kind of thing you'd want to put on in the comfort of your home or with the windows up in your car. Anywhere that people won't see hear you hysterically bawling, basically.

Delta was quick to respond to the rapper's lament, and provided a pretty reasonable explanation for their song selections. Not only that, but they gave T-Pain a solid shout-out in the process.

"Our boarding/taxing songs are intended to provide a relaxing experience," the airline wrote. "Can you imagine what would ensue if we played 'buy u a drank' (a personal fave), with everyone snappin’ their fingers and what not? We’d never get anywhere on time. Necessary sacrifices, Mr. Pain. *HBN."

First of all, "Buy U A Drank (Shawty Snappin')" is an excellent track, no doubt. Second of all, Delta made a pretty good point. It's usually somewhat of a struggle to get everyone on and off of any given flight in an orderly fashion. Flying, in general, can be really stressful, so trying to lessen that stress with relaxing music is a solid strategy.

T-Pain seemed to agree, and responded, "Touché. Understandable." Delta and the rapper sent a few more messages back and forth, essentially sharing their mutual appreciation for one another. When T-Pain left Los Angeles and landed in Atlanta, though, he found himself in for a treat of epic proportions.

Apparently, Delta decided to make a one-time musical exception in honor of their famous, loyal customer. At the end of the flight, they blasted "Buy U A Drank" through the speakers, and T-Pain caught the whole thing on video.

In the clip he posted on Instagram, the rapper — who had headphones on at the time — was alerted to the tribute by one of the flight attendants. "Oh boy," he laughed. "That's all for you," the flight attendant told him. "I appreciate it, I appreciate it," he told her, somewhat sheepishly. He seemed a little embarrassed that they were clearly aware of his previous tweet, but in the end he declared, "Delta lit!"

"We just landing back in Atlanta from LAX and @delta decided they wanna show out and starts blastin 'Buy u a drank' over the speakers in the plane," he captioned the video. "Not gon lie it felt pretty damn cool. Made me chuckle like a lil girl. sh*t was wild loud too. Big thank you to @delta and the super solid flight attendants for getting the flight lit @delta I see what you mean. I didn’t wanna get off the plane. Solid facts."

The whole thing was so damn pure and so, so funny. Delta's probably got a customer for life in T-Pain now, and a new slogan they should definitely start using: "Delta Air Lines: We're Lit. Just Ask T-Pain."