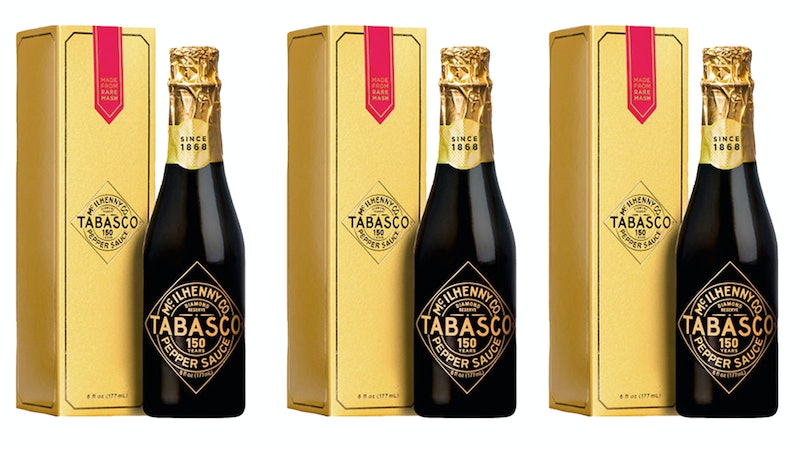 Have you ever looked at a bottle of hot sauce and thought, “This is great, but I wish it were much more extravagant for no reason.” Fear not, my fancy friends, because Tabasco just released a new Diamond Reserve Hot Sauce, and it is spicy extravagance in a bottle.

They’ve dubbed it the “Champagne of pepper sauce” and are treating it as such. Namely, the hot sauce comes in a mini Champagne-style bottle, complete with that fancy gold foil on top and everything. (Well, no cork. That just seems dangerous.) Tabasco developed the overly ornate sauce in honor of the company’s 150th anniversary. Your first anniversary is paper. Fifth is wood. And anniversary number 150, as we all know, is the fancy hot sauce.

A six ounce bottle of the anniversary hot sauce will cost you $35. You know, about how much an actual bottle of Champagne might cost you. Or, like, three bottles of Trader Joe’s sparkling wine.

What does $35, Champagne-level fancy hot sauce taste like? According to Tabasco, the Diamond Reserve sauce is made with “the finest tabasco peppers on Avery Island,” which were selected based on color, texture, and robustness. Only the best peppers were picked. The peppers were then mashed and aged up to 15 years. Finally, they were blended with sparkling white wine vinegar (hence the “Champagne” theme) making a hot sauce Tabasco claims has “exceptional complexity” but also that signature Tabasco flavor you’ve come to know and love.

Tabasco doesn’t list any suggested food pairing with their Diamond Reserve Sauce. So, I figured I’d come up with a few of my own. Here are just a couple of the extensive list of occasions that call for $35 Champagne-inspired hot sauce:

You could also just add it to an actual meal made with champagne, which exist for people who don’t possess the stamina and determination to finish a whole bottle of champagne. Then, you can end your meal with some after-dinner Champagne gummy bears and an actual glass of Champagne.

Hot sauce may be good for more than just our taste buds. Some studies suggests that it hot sauce may have health benefits. If you’ve ever piled on the sriracha while you had a cold, you’ve probably experience the sinus-cleansing effects of spicy foods. However, capsaicin (the thing that makes spicy foods spicy) has been linked to reduced inflammation, appetite suppression, and endorphin production which makes us feel happier. One 2015 study, published in the BMJ, found that participants who consumed spicy food three to four times a week reduced their risk of death by 14 percent. Basically, hot sauce saves lives and alleviates sadness.

Not sure if a $35 bottle will heighten those effects eight-fold (a five ounce bottle of original Tabasco runs about $4), but I’m guessing it can’t hurt. Especially if you pair it with any form of comfort food and a glass of bubbly. So, slather away, my saucy friends.