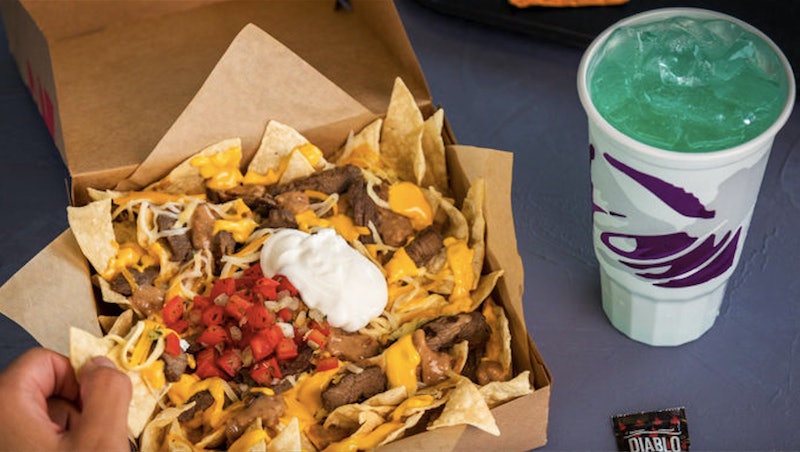 What's better than nachos? Obviously, the answer is steak nachos topped with cheese, refried beans, sour cream, and pico de gallo. If you're wondering where you can get what can only be described as the unicorn of nachos, Taco Bell has a $5 steak nacho box, and it's going to make all of your summer nacho dreams come true. Taco Bell's Steak Nacho Box is reportedly so delish that Reddit users are giving it all the love it deserves.

"The box is delicious and ridiculously filling. When getting the $5 cravings deal, I always have to throw in an extra $1 item from the dollar cravings menu," Swade-Wilson noted on Reddit. "But [I'm three-fourths of] the way done with the box and I'm STUFFED." If you're looking for a grab-and-go meal to fill you up, it sounds like the Taco Bell Steak Nacho Box is going to be your jam.

The best part is that with dairy, fruits, veggies (yes, tomatoes are a fruit!), and protein, it contains most of the necessary recommended food groups to power you through the day like a boss. And, other Taco Bell devotees agree that these steak nachos are the cat's pajamas because they not only fill you up on the cheap, but they also deliver a cornucopia of flavor.

"Yeah, I agree with everything you have to say! These nachos are legit my new favorite thing I've ever had at Taco Bell," Reddit user Twitchster77 responded to Swade-Wilson, adding that they drove 30 miles to the closest Taco Bell to sample the new nachos. "I got the steak, but I also had them add a scoop of taco beef and some sauces. Omg guys! It was AMAZING!"

Ian Keiner reviewed the steak nacho box, which comes with a medium drink, on YouTube for Peep THIS Out! Keiner said the Taco Bell Steak Nacho Box tastes exactly like it looks, delivering the Taco Bell flavor combo you know and love. He also noted that this nacho box doesn't skimp on the cheese, steak and beans, which means you get a hearty bite atop every chip. He called the box of cheesy goodness "tasty," and recommended adding guacamole and jalapeños to give the steak nacho box even more spice.

"If you're a fan of Taco Bell, and you love the ingredients and you love the food in general, you have a lot to look forward to with this box," Keiner said in his review. "It is a plentiful box that they give you — the presentation is pretty solid. You can definitely customize it and take your version of it to the next level."

Seriously, even though it's breakfast time in California, I am counting the minutes until I can make a run for the border to my neighborhood Taco Bell to get my steak nachos on. While the Taco Bell Steak Nacho Box is advertised for $5, Keiner said his box in southern California cost him $6, which means that the price may vary depending on where you live.

And, if your mouth is watering as much as mine, you're going to want to jump on this ASAP in case it only ends up being around for a limited time. Reddit user nintendolewhip gave the steak nacho box a 10 out of 10, and user mafulazula said that if you're looking to enjoy the nacho box as a meal, it will definitely do the trick.

"I'm a big dude ... There's no reason somebody should need a box AND something else unless they're training for the Olympics or something." But, hey, there's no shame in ordering one now and getting another one to eat later — you do you. Because, nachos. And steak. In a box. Live mas my friendlies, live mas.