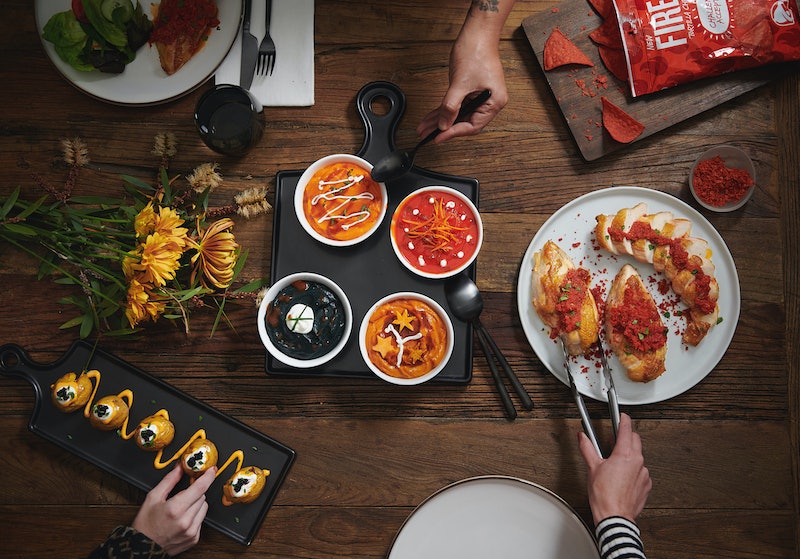 Thanksgiving is right around the corner and with it comes Friendsgiving. It’s that pre-holiday holiday stuffed with friends and food, all nestled cozily into the loveliest of portmanteaus. And what says “Friendsgiving” like “Taco Bell”? Oh, a lot of things actually? Taco Bell is perhaps the furthest thing from Friendsgiving, you say? Well, Taco Bell wants to be a part of your Friendsgiving this year, and what are you gonna do, say no?

This isn’t Taco Bell’s first foray into Friendsgiving. In fact, this is the sixth year Taco Bell has created a Friendsgiving-inspired menu, filled with recipes for you to bring to your upcoming Friendsgiving gathering. Lest you think this is just a ploy to get you to start eating Doritos Locos tacos for Friendsgiving, the menu is equal parts easy and elevated, surprising and familiar. It’s basically fancy Taco Bell, y’all, and you’re definitely going to eat it.

Is the food delicious? Is it an abomination? That’s up to interpretation, but this year’s menu is no different in terms of taking Friendsgiving to the next level. That level is Taco Bell. Did you even know levels go up that high?

The key to any solid holiday meal is the side dishes, and Taco Bell’s Friendsgiving side dishes will have you saying, “...wait Taco Bell came up with these? Are we talking about the same restaurant responsible for the Naked Chicken Chalupa?” Why have regular mashed potatoes when you could have Sauce Packet Seasoned Root Vegetable Purees? The spread of purees features, “Carrots, Garnet Yams, Red Kuri Squash and Parsnips slow roasted with chilies and spices to develop the unique flavor and heat of our sauce packets.” Finally, a use for those extra sauce packets you’ve been inexplicable stowing away in your fridge.

Taco Bell can be made fancy, my friends. So, truly anything is possible.

No Friendsgiving spread is complete without a cocktail. Likewise, no Taco Bell-inspired meal is complete until someone’s at least a little inebriated. This year’s specialty cocktail is called “Rice & Beans.” But fear not: the drink won’t require chewing. It’s “a boozy cocktail made with Horchata (the rice), Vodka and Coffee Ice Cubes (the beans).” It pairs well with all of the above menu items and reassuring your friends, “Yeah, Taco Bell came up with this.”

If you want to go absolutely buck wild, you can even get a Taco Bell holiday sweater to wear to your Friendsgiving feast. In collaboration with Tipsy Elves, Taco Bell has some seasonal sweaters and legging available online. They feature festive phrases and patterns that are equal parts holiday-inspired and Taco Bell-related. For $59, you could sport a knitted sweater that says, “Thankful for Taco Bell.”

The cost of eating a holiday meal inspired by Taco Bell? Priceless.