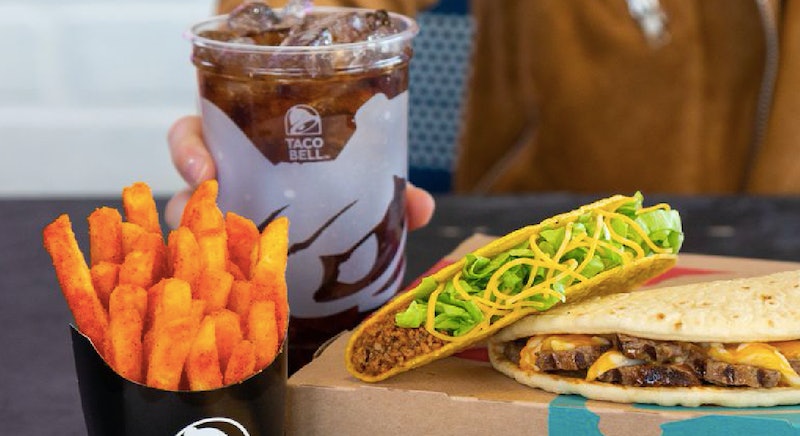 Taco Bell is trying out something new: extravagance. As reported by Delish, Taco Bell is testing its most expensive meal box ever. It costs not $1, not $2, not $3, not $4, not $5, not $6, but $7! Clearly, this must be for the Taco Bell devotee with a more refined palate.

The new meal is called the Double Steak Melt Deluxe Box. Here's what you get:

One can guess that this box is one to two dollars more than Taco Bell's other boxes because of the double steak melt. Even the steak at Taco Bell is going to be more expensive than, say, ground beef. That said, it's not the most expensive combo to ever exist at Taco Bell, just the most expensive box. For example, the 3 Doritos Locos Tacos Supreme Combo #11 and Mexican Pizza Combo #4 are both over $7 on the chain's online menu for certain restaurants, but price is dependent upon location.

As stated above, right now the Double Steak Melt Deluxe Box is only being tested, which means it's currently only available in one area. Cleveland residents, it's your lucky day. (If you like Taco Bell and eat steak.) The box is being tested in the Ohio city until late February, according to The Daily Meal. The site notes that the Double Steak Melt can also be purchased on its own for $3.29.

In other Taco Bell news, the chain announced that it will soon test a vegetarian specific menu. Taco Bell already has a number of vegetarian items, but it will be adding more and featuring them all on a dedicated menu that will be tested later this year, although the exact time has not yet been announced.

So, there's a few things to look forward to, Taco Bell fans. If you eat meat, the fancy schmancy Double Steak Melt Deluxe Box could end up expanding after the Cleveland test and let you bust our your evening gown and long gloves for a trip to the chain. Or, if you're vegetarian, you could get a few new menu items to switch things up from that 7-Layer Burrito.