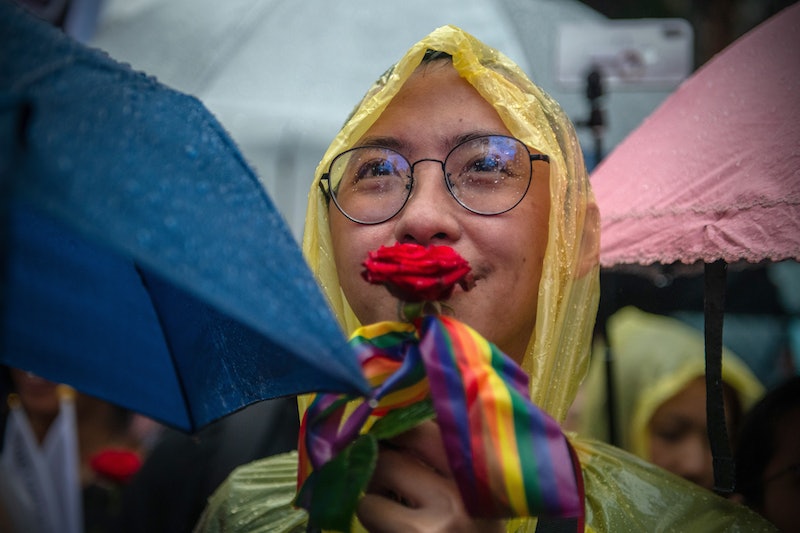 Marriage equality has slowly become a reality in more and more countries across the globe, and on Friday, the movement took another step forward. Taiwan legalized same-sex marriage in a historic vote, becoming the first Asian country to do so — and the law just so happened to pass on the International Day Against Homophobia, Transphobia and Biphobia.

Proponents of marriage equality gained their first victory in May 2017, when the high court of Taiwan ruled that blocking same-sex marriage violated the country's constitution, according to The Washington Post. After that, Taiwanese lawmakers had two years to pass a law specifying the form in which same-sex marriage would be made legal before it would be automatically legalized, The Post wrote. This law passed just a week before that deadline.

"Today the result was the best we got for this stage," Wu Tzu-an, a gay Taiwanese artist, told CNN. "It's also a sign to show that Taiwan was different from China ... Personally I don't have plans to get married, but I think it's a sign for equality."

There were three versions of the bill on the table, as the BBC reported, and the legislature chose the version that was backed by LGBTQ activists, the most progressive of the options.

The version that will go into effect on May 24 was the only one to include "marriage" among same-sex couples' rights, according to Vice. Conservative groups put the other two versions forward, and they were far more restrictive for same-sex couples. Making the progressive choice, though, could even make ripples elsewhere in Asia, activists elsewhere hope.

"It will have a very positive impact on China's LGBT community, offering us a lot of hope. The Chinese government has pointed to cultural tradition as a reason for same-sex marriage being unsuitable in China," Beijing Gender Health Education Institute Director Xiaogang Wei told CNN. "But the decision in Taiwan, which shares a cultural tradition with us, proves that Chinese culture can be open, diverse and progressive."

In the end, the legislation passed by a margin of 66-27, and it grants same-sex couples equal rights in terms of taxes, insurance, and child custody, in addition to recognizing same-sex marriage, according to The Washington Post.

"On May 17th, 2019 in #Taiwan, #LoveWon. We took a big step towards true equality, and made Taiwan a better country," she wrote, adding a rainbow flag emoji.

This is also a big turnaround from 2018, when a referendum in Taiwan voted against marriage equality, according to Vice. The new law, then, is a big step in the opposite direction, but activists emphasize that there's still work to be done in terms of LGBTQ civil rights.

"It's still not full marriage rights; we still need to fight for co-adoption rights, and we are not sure about foreigner and Taiwanese marriage, and also gender equality education," Marriage Equality Coalition Taiwan chief coordinator Jennifer Lu told the BBC. "It's a very important moment, but we are going to keep on fighting. We are Taiwanese and we want this important value for our country, for our future."