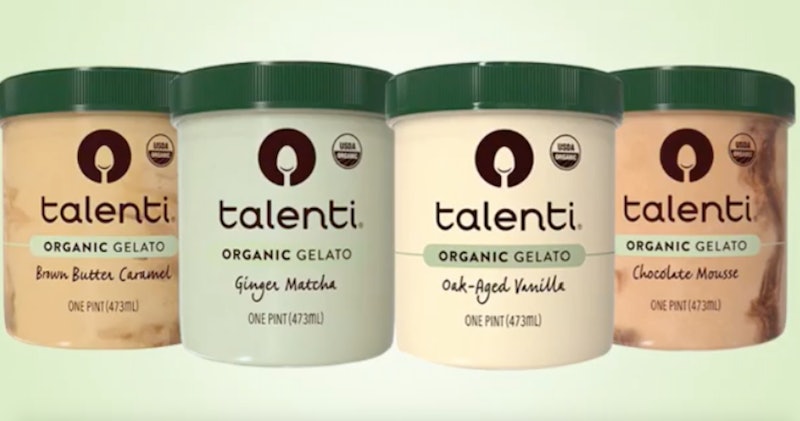 Gelato makes the world a better place, plain and simple. It's ice cream's denser (more delicious) counterpart, and if you're a fan of the dessert you probably know frozen treat company Talenti a mile away by now. The brand, named after Italian gelato inventor Bernardo Buontalenti, was founded in 2003 but took the world by storm pretty recently. Now, to kick off the new year, Talenti has released its new flavors for 2019 — and they look simply amazing.

The new flavors were debuted today as part of an entirely new line: Talenti Organic. It shouldn't come as a shock that the brand behind the best-selling gelato in the US is releasing the collection of "artisanal gelatos made with all organic ingredients." After all, why not give fans more of the frozen delights they love so much? Talenti's all new range includes a variety of four different flavors, and there's sure to be one that you'll love.

First off, there's Organic Ginger Matcha Gelato, which is made with green tea and ginger blended into an in organic cream, and complete with a mixture of Japanese Matcha. Then, Talenti is taking a spin on a beloved flavor with the Organic Oak-Aged Vanilla Gelato, comprised of organic, slow-cooked Madagascan vanilla gelato, given even more flavor with hints of oak in the pint. Again with a spinoff, the brand's Organic Chocolate Mousse Gelato was created with organic dark chocolate gelato (whipped together with egg to give it its fluffy, light texture) and perfectly swirled with fudge inside. Last but certainly not least, the Organic Brown Butter Caramel Gelato will give customers the chance to taste a delicious, organic caramel gelato with buttery dulce de leche whisked into the mix. I'm basically speechless, but all I can say is that I'm dying to get my hands on any one of these.

That's not all Talenti has in store, either: the brand is expanding its already existent Less Sugar line with a brand new Crafted with Less Sugar Lemon Bar Gelato, whipped up with lemon zest, zesty lemon curd and shortbread bits, and sweetened to perfection with monk fruit juice.

"We know more consumers are looking for organic options — especially in the ice cream and gelato category," Talenti founder Josh Hochschuler explained in a statement. "We're thrilled to offer a line that meets this demand, while still delivering that same delicious taste consumers have come to expect from Talenti. We had a lot of fun creating unique flavor combinations in the Organic line, and we can't wait for our fans who are craving something new to try them," he continued. Trust me, the rest of us can't wait either.

Per a press release from Talenti, the five recently-debuted flavors are currently available in grocery stores across the country, and you should be able to pick up a pint of your own from the Organic line for roughly $5-$6 (the Less Sugar options will go for about $4-$5). Talenti hit the ball out of the park with these new flavors, and I know what aisle I'll be headed to on my next trip to the store.