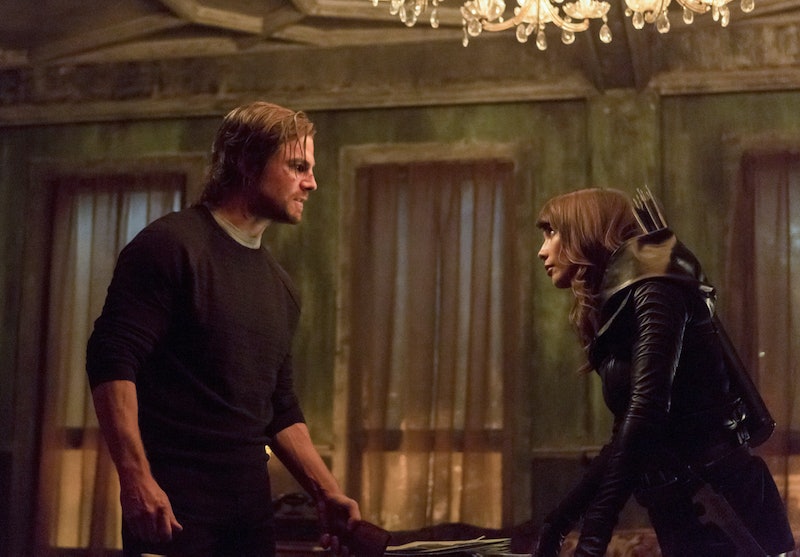 She's only briefly appeared in one episode of Arrow so far, but Talia al Ghul is already a well known figure to comic book fans. Her addition to Season 5 should excite fans of the CW series, because Talia al Ghul's DC Comics background paints a picture of an extremely interesting and complex villain, in a medium that's often very reductive when it comes to female characters. Talia has played both sides, gone from confidant of heroes to the ultimate villain, and been everything from a puppet to a mastermind.

As "Who Are You?" showed, the Arrow version of Talia saved Oliver Queen in Russia from Ishmael Gregor, the Russian gangster. While she's still coded as ambiguously trustworthy, she did risk herself in order to rescue Ollie, and even has some serious bow and arrow skills — perhaps, once she takes him in, she'll teach him a few basics. Talia has also made an appearance on Legends of Tomorrow, and after going beyond The CW's DC Universe and looking at some of Talia's key characteristics and storylines in the comics, it's easy to see why the show was keen to work this character into its latest flashback storyline.

Yes, she is the daughter of supervillain R'as al Ghul, the sinister, genocidal villain who menaced Arrow in earlier seasons. In the comics, Ra's does treat his daughters as his heirs, training them as highly skilled assassins, which is probably where Arrow-Talia got her skills.

Speaking of the al Ghul family, there's a minor change Arrow made to the continuity. Usually, Nyssa is Talia's younger sister, but on the show, they switched the age order.

She Can Stay Young Forever

Because she's R'as' daughter, Talia often has access to Lazarus Pits, powerful chemicals that give her the ability to de-age herself, just like her father. That's been used many times in the comics, as well as in the CW universe. Since Talia appeared on Legends as a young girl in the 1960s, she probably has access to a Lazarus Pit of her own.

In the comics, Talia fell in love with Bruce Wayne and even murdered Dr. Daark, the leader of the League of Assassins, in order to rescue him in one story. This was kind of echoed in The Dark Knight Rises, but with a twist. Plus, the love story felt underdeveloped there, but in the comics, the characters have a real relationship and even a child together, Damian Wayne, who becomes Robin.

While lots of Talia storylines portray her as her father's heir and a powerful assassin, she's also sometimes a corporate villain, like in "Batman Incorporated." There, she started her own organization, Leviathan, which went for a more sophisticated version of global domination by infiltrating companies, schools, and even opening up terrifying local butcher shops that performed frightful, cloddy sacrifices. I mean, that kind of villainy takes a savvy woman at the helm.

Once, while in the middle of one of her love affairs with Bruce Wayne, Talia decided that he wasn't properly prioritizing saving the planet from some terrorists, so she faked a miscarriage to end their relationship. So yes, she is determined and willing to lie to make something happen.

Even though Oliver should be in skillful hands in his Arrow flashbacks, Talia's varied DC history shows that he may not necessarily be in safe ones.