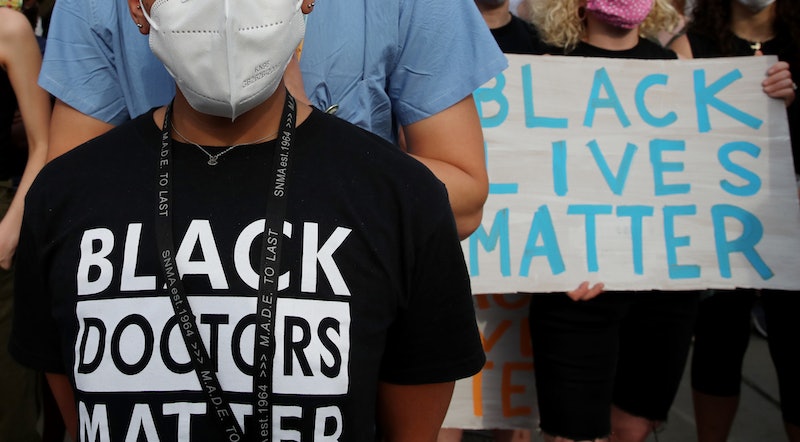 Since the police killing of George Floyd on May 25, Dr. Rebekah Fenton, an adolescent medicine fellow at Lurie Children's Hospital of Chicago, has been seeing patients who’ve been affected by protests. She’s also been helping provide supplies for protesters in the community, participating in marches and demonstrations, organizing events for her co-residents at her hospital, and creating virtual grieving spaces for Black and brown medical providers and students. Here, she tells Bustle why police brutality is “a pervasive issue that impacts health.”

I only see patients in the exam room, but I know that their lives are affected by everything that goes on beyond those walls. It’s important for us as doctors to acknowledge what’s happening [with the protests]. Sometimes my patients know Chicago’s history of race and police violence and talk about it with me. Other times, you can tell they’re affected by it without even knowing it by name.

I had one patient recently who just wanted to talk. I spent the majority of that visit just listening, and we conducted the medical care they’d come in for at the end. Systemic racism prevents us as doctors from promoting people’s health and well-being in a broad sense, beyond addressing disease. I hear a lot of doctors say, “Well I’m just going to take good care of my patients,” in response to the protests, and leave it at that. But taking good care of your patients means acknowledging racism.

The American Academy of Pediatrics published a paper specifically saying that racism is a deterrent to a child’s health. The neighborhood we live in, the food we eat, the job we have, the school we attend — all of these things impact our health in the exact same way racism does. It leads to mental trauma that yields chronic diseases in the body. One in 1,000 Black men will be killed by the police, as one 2019 study found. If we knew that one in a thousand people were dying of something else, we would have some kind of national public health campaign to stop it. That same effort needs to be done around police violence.

I have done some service in the community this week — organizing and participating in marches with other doctors, and volunteering with youth- and gun violence-focused organizations to help provide supplies for protesters. Every young person I have been with has shared stories of being impacted by violence, whether the police were involved or not. When Black people — adults and young people — start talking about a Black man dying, everyone brings up the past experiences they’ve had.

Community violence is a huge part of my patients’ lives in neighborhoods like the South and West Sides of Chicago, where I’ve been volunteering. Over the last couple of weeks, these same students led protests and participated in events. It’s hugely inspiring for me, but I also hear youth talk about their concerns for their health and the risks they’re taking by participating in these protests. What could happen to them if they have an interaction with law enforcement while trying to exercise their rights?

When I was handing out juice boxes and supplies with an anti-gun violence group on the South Side of Chicago, police officers drove by three or four times. The group of predominantly Black youth I was with put their heads down every time a police car passed us. I couldn’t stop thinking about how a little white boy would be excitedly waving to a police officer, versus these adolescent Black boys who were instinctually putting their heads down.

The Sunday after the first week of the protests, I was in church. When my pastor started to talk about the current protests in the context of this very long struggle, I started to cry. That release was key for me, knowing I was going into a workweek where I’d be alongside other Black and brown medical students who serve predominantly Black and brown patients.

I’m channeling my grief into working on race and inequity. Everyone who’s ever thought about racism feels like they have to rush to write and speak out while the world’s attention is on this issue. We don’t know when the spotlight will move and if it will ever come back. But I’m also trying to do things that bring me joy — not checking email when I’m not working, being present with my husband. As much as I’m enjoying the energy I’m getting out of channeling my pain into action, I need to create resting time for myself. This is a marathon, not a sprint.