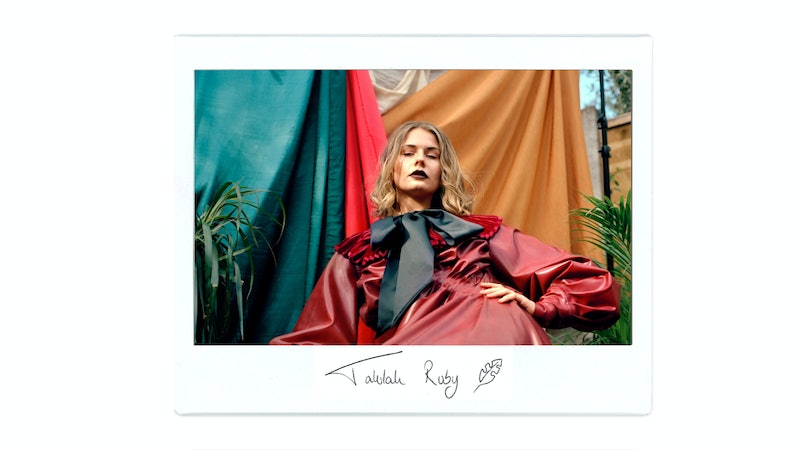 When celebrities hang out with Bustle editors, we want to give them the chance to leave their mark. Literally. So we hand them a pen, a piece of paper, a few questions, and ask them to get creative. The rest is up to them. This time, singer songwriter Talulah Ruby is leaving her mark in the Bustle Booth.

“I am as much a fan as I am an artist. I grew up respecting music as an artform, it’s always been in my life,” says Talulah Ruby. “I’ve been performing since I was a kid and I don’t think I can remember a time without it.” And that experience shines through her work, which has an ease and natural flare that's perfect for any summer playlist. The soulful beat mixed with her dreamy voice on her new single “I Don’t Feel Like Me” makes for such feel good, chilled out listening.

It's no surprise Ruby manages to transport you to a sunnier place through her music. "I’m from a small Spanish island off the coast of Morocco, Lanzarote," she says. "I was brought up by my parents who moved there from the UK."

It'd seem her upbringing has had a pretty big impact on her music as her debut single “Hot Water” looks at the effect that global warming is having on the islands like the one she grew up on.

Ruby's inspiration doesn’t just come where she grew up, though. The singer is influenced by some legendary artists, including Billie Holiday "for so many reasons," she says "but mostly for her resilience and perseverance. She holds an undeniable power and solidified the importance of music in the world for me.” Ruby uses her music to convey a message to her fans, a quality that she admired in Nigerian musician Fela Kuti, “overall for his energy and commitment to the cause. He was a revolutionary and lives on.”

And contemporary artists get a look in too. "I have to shout out my Spanish queen, Rosalia," Rub says. "She takes her work very seriously and makes me so proud to be Spanish. She carries a sense of maturity in each aspect of her career because it seems that ultimately, she has faith in her knowledge and studies as a flamenco artist, so she understands the weight that being a musician holds in society."

Where her debut single “Hot Water” took on the massive issue of global warming, “I Don’t Feel Like Me” feels far more personal. With the opening line “there's a room in my head that I go to sometimes. I lock myself away and it's there I cut ties” the honesty pours out from the get go.

So, what would Ruby be working if not music? "Psychology," she says. "People interest me the most. I’ve been lucky to travel a lot from a young age and human behaviour makes me so curious."

It’s this awareness of people and issues that makes Ruby’s work feel new. She might be young, but she's already got her niche. "A lesson I’ve learned is that no one is going to grant you your vision. You have to come up with it, suggest it, pitch it, execute it, and then sell it yourself — even with an amazing team, you are the only person who thinks the way you do, so you can’t expect anyone to do it for you," she says.

Although she's at the very start of her career, Ruby has big plans for the future. When asked about collaborations, she says: "This is my dream question. I think collaboration is such a wonderful thing." Bad Bad Not Good, Cinematic Orchestra, and Thundercat are her three choices. "But short term, there are so many people in my circle that I’m yet to collaborate with in London."

I for one can’t wait to see what Ruby creates next.

You can download “I Don’t Feel Like Myself” now and if you want to know a little bit more about Talulah Ruby, in her own words, she answered her Bustle Booth questionnaire.