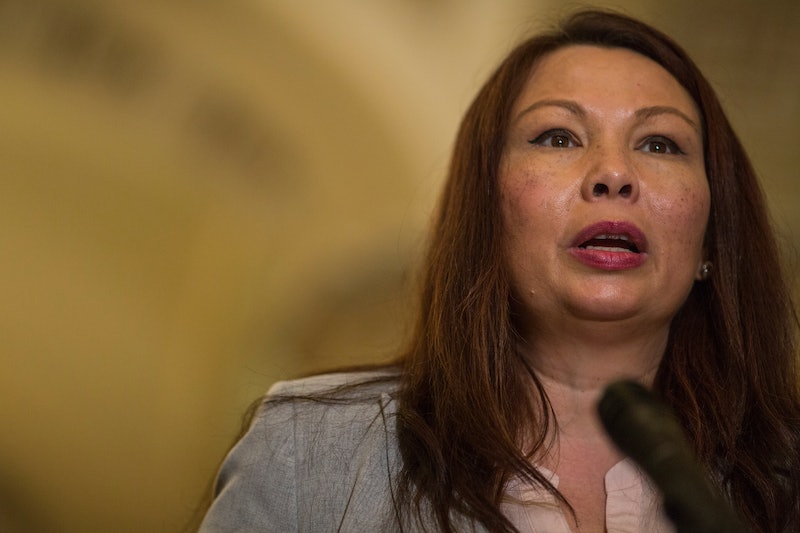 A day before talks between POTUS and Kim Jong Un are set to begin, Sen. Tammy Duckworth warned that Trump's Hanoi Summit has to result in something other than a "PR stunt." Taking to Twitter on Tuesday, the Illinois senator called out the president for what she claimed was how "little" he accomplished at the last summit with the North Korean leader. This time, Duckworth argued, it has to be different — and she was pretty honest about how likely she thinks it is that that will happen.

Duckworth released a pair of tweets on Tuesday evening, which read in full,

Donald Trump accomplished little during the 1st summit aside from elevating a brutal, cruel dictator on the world stage. It's critical for this meeting to not just be another PR stunt and that POTUS obtain measurable & verifiable commitments to denuclearize the Korean Peninsula

Unfortunately, Trump’s willingness to discard the recommendations of our military leaders and the intelligence community in favor of any dictator or despot who plays to his ego does not leave me optimistic that a good deal with Kim Jong Un will be reached...

Duckworth linked the tweets to a Vox article which breaks down the alleged proposal that POTUS and Kim are set to agree upon in Vietnam, based off of three sources.

According to Vox, the outline of the tentative deal between the two leaders will, barring any change of circumstances, include these terms: a mutually agreed-upon peace declaration to symbolically end the Korean War; North Korea will return an undisclosed number of remains of U.S. troops that died during the Korean War; both countries will establish liaison offices in each other's nations; and North Korea will stop producing nuclear bomb materials at the Yongbyon facility, which is a critical facility for the country's current nuclear program.

Though this may seem like a deal that's benefitting both countries, the publication notes the one central aspect of the outline that might indicate a better deal for North Korea: there's no specificity, as of yet, as to how, when, or under what circumstances the Yongbyon facility will be shut down. In other words, there's no proposed plan as to how the U.S. will confirm over time that North Korea has, in fact, shut down the facility for good.

Grace Liu, who works at the Middlebury Institute of International Studies, said to Vox, “An agreement on the dismantlement of such a site has to be worded deliberately and concisely so technical experts can watch and verify each step in the process."

The meeting might not have taken place yet, but POTUS has already acknowledged some of the naysayers. In a tweet on Tuesday evening, Trump wrote, "The Democrats should stop talking about what I should do with North Korea and ask themselves instead why they didn’t do 'it' during eight years of the Obama Administration?"

Trump arrived in Vietnam on Tuesday morning, according to The Washington Post. The summit between the two leaders is expected to last two days, starting with a private dinner on Wednesday evening, per the publication.