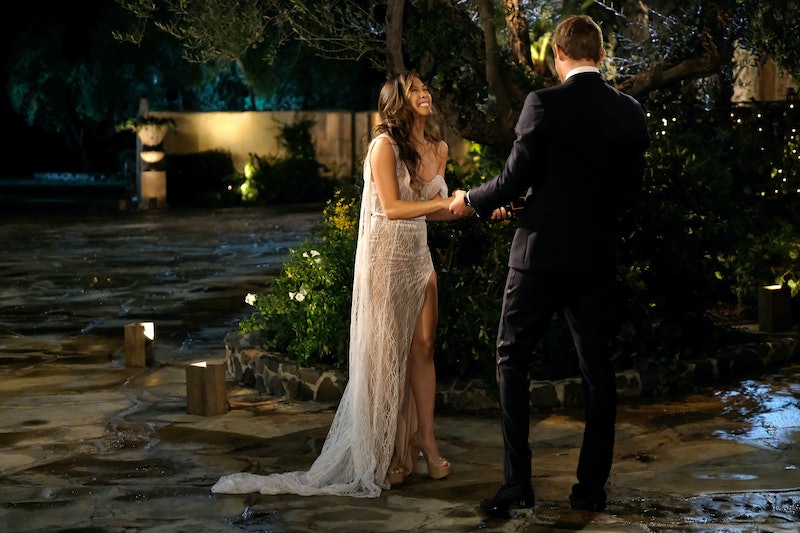 To get a shoutout from Chris Harrison this early in the season means that one of Peter's Bachelor contestants, Tammy Ly,is off to a good start. In his initial announcement video that introduced the Season 24 cast, Harrison called her "a badass" and said that her story might be his favorite of the year. Why? Because she has an incredible, successful life, and she's overcome all kinds of adversity to create it. In Harrison's words, it's the American dream.

Her family immigrated to Syracuse, New York during the Vietnam War, per her ABC bio, an experience to which she attributes her drive and determination to prove skeptics wrong. An example: In high school, she went out for the boys' wrestling team, per ABC. And when she was denied a spot, she persisted, filing a Title IX complaint. She went on to hold a seven-to-one winning record against her fellow varsity wrestlers that year.

Now, at 24, she has six jobs — as a realtor, insurance agent, investor, marketer, bartender, and actress, according to her Instagram bio. ABC assigned her the occupation of "house flipper." She runs a second real estate Instagram account on which she shares client success stories, house tours, inspirational quotes, and more.

Her acting gigs seem to be primarily local commercials. On her primary Instagram, she has shared a few clips. In one, she plays a nurse in a medical sales commercial. "I’m basically a pro at ELI380 ECG readings now," she captioned the post.

Tammy has been working to support herself and her family since her parents divorced and she graduated high school, per ABC, which has been rewarding, but has definitely interfered with her dating life. The Bachelor will — hopefully — help her slow down and get in touch with her romantic side, but she's still looking for a lover who can match her over-ambition.

She doesn't seem privy to being stationary — she danced her way through the introductory announcement with Harrison, and she travels so much that her car's license plate reads, "JETSETTR," per ABC — a tag that would definitely appeal to Pilot Peter, who is, quite literally, a jet-setter himself. Under her travel pics (which is most of her Instagram), she uses the hashtag #TheTammyTour.

According to a few other grid photos, it looks like she's actively involved with the Abundant Life Christian Center, where she attends church and joins volunteer efforts within her community. On July 20, she posted a photo with a group of volunteers, all wearing matching t-shirts. "Another fulfilling #ReachSaturday delivering groceries to the Syracuse community," she captioned the post. What doesn't she do?

It's clear that Tammy will work for what she wants, and the season trailer for The Bachelor shows that Peter made the top of her list. "Peter flies in and he's looking so freaking delicious," she says in the clip. "Like I just want to lick him up and down." The only catch is, the market for him is pretty cut-throat, so she might have to keep a few sales pitches up her sleeve.