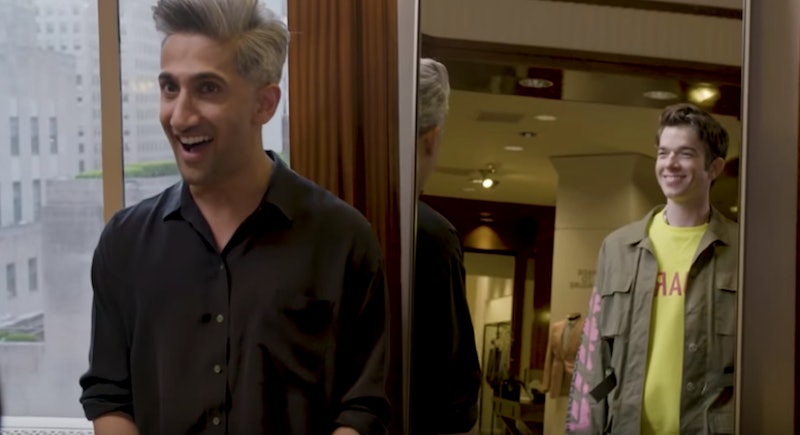 Queer Eye’s fashion expert is dressing up beloved comics. Tan France’s new Netflix show makes over John Mulaney, Ali Wong, and more of your favorite comedians. Dressing Funny, which will air exclusively on Netflix’s YouTube channel and the Netflix is a Joke account, follows France as he aids comedians with their style. New episodes of Dressing Funny are slated to premiere Thursdays at 9 a.m. PST.

The series unveiled its first trailer on Friday, June 21, teasing appearances by Mulaney, Wong, Nick Kroll, Pete Davidson, Rachel Dratch, Miranda Sings, and Tina Fey. The concept is pretty brilliant, and it likely stems from the streaming giant's October 2018 segment that saw the fashion guru style Hasan Minhaj prior to the launch of the comedian's Netflix series Patriot Act.

In the laugh-filled trailer, France discusses vaginal rejuvenation with Wong, lays in bed with Davidson, and exchanges British accents with Dratch. “Each episode I’m dressing some of the funniest people on the planet," France teases in the trailer. "Will we laugh a lot? Yes. Will I teach a woman about vaginal rejuvenation? Yes. Will I lay with another man? Yes." He concludes, "Either way, you’ll see your favorite comedians like you’ve never seen them before.”

But that's not all. Netflix also released the very first episode of Dressing Funny, in which France takes Mulaney, who stars on Netflix's Big Mouth and released a Netflix stand-up special last year, for a Hypebeast makeover at a Saks Fifth Avenue. In the segment, the comedian — one who routinely dons snazzy suits in his stand-up specials — explained his overall style to the fashion guru by likening his on-stage wardrobe to that of "an entertainer in the ‘50s." France then quipped bluntly, “Just because you’re 36 doesn’t mean you have to dress older. How do I say it? We still want to be f*ckable.” He added, “You’re a respectable man, but I want you to be a f*ckable man.”

From there, France equipped Mulaney with more youthful apparel options. After he modeled various favorite red carpet looks, the comedian then tried on a series of impressive outfits: a salmon suit with white sneakers, a fanny pack-accessorized look inspired by Pete Davidson, and finally, a more in-tune brown suede jacket with jeans and boots. “John Mulaney. F*ckable again,” France said.

A new episode of Dressing Funny featuring Nick Kroll will be released on Saturday, June 22, and the web series will resume with its Thursday lineup thereafter. The show marks France’s second breakout venture from his hit makeover series Queer Eye, which returns for a fourth season on July 19. The stylist is also slated to co-host Netflix’s upcoming Next in Fashion, the streaming giant’s first original fashion competition series, alongside designer Alexa Chung. While a release date has yet to be announced, the competition series will comprise of 10 episodes and star Elizabeth Stewart, celebrity stylist, and Eva Chen, fashion director at Instagram, in guest judge roles.

Can you believe? With Queer Eye, Dressing Funny, and Next in Fashion, Tanny has been hard at work expanding his fashion empire.