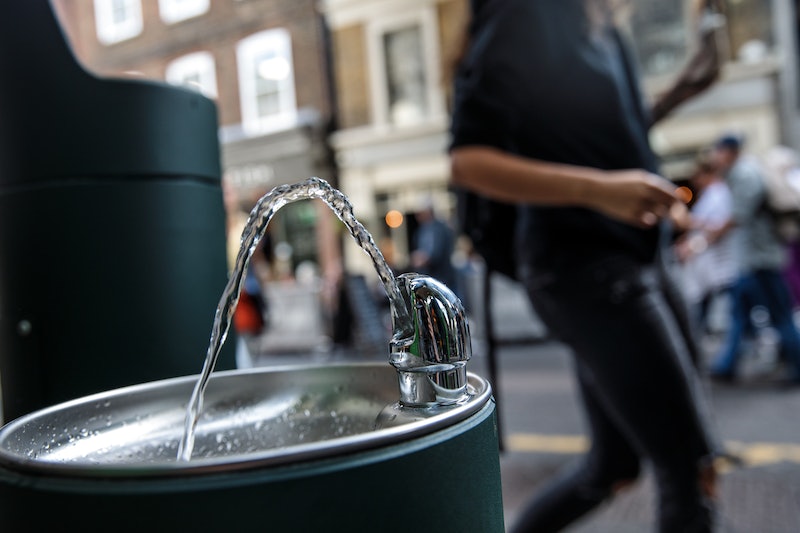 You can find practically anything with your smartphone these days. Baklava near you? Yup. Doggie playmates? Yup. But water? It’s up to you to wander around until you can find a working drinking fountain, or shell out for a plastic water bottle. A new app hopes to fix that problem. Launched on Oct. 23, Tap app helps you find free water near you, according to Forbes. Created by entrepreneur Samuel Ian Rosen, Tap allows smartphone users across the world to find the closest free public drinking fountains or water bottle refill stations, says Forbes, including businesses and restaurants that have signed up as a part of the global Tap Authorized Refill Network.

“Nobody up till now has built a Google Map for (drinking) water,” Rosen told Forbes. “Finding water is inconvenient. When I go to Google Map and type 'water fountain,' there is nothing. We tell you where the water is.”

Rosen says he was inspired to come up with this thirst-quenching solution after his run-in with a broken water filter at an airport forced him to buy a bottle of water, mindbodybreen reports. "Being thirsty is inconvenient," Rosen told mindbodygreen. "I thought it was ridiculous that in 2018 I'm buying a plastic water bottle that's going to last 450 years on earth because I couldn't trust the drinking water at the fountain."

Tap shows you in real-time where you can find water, says mindbodygreen, and you can filter (no pun intended) by what kind of water you’re looking for, such as flavored, sparkling, and, well, filtered water. Rosen and his team mapped out 35,000 locations across 30 different countries, partnering with bars, restaurants, and coffee shops that agreed to give people free water in exchange for placement on the map, according to mindbodygreen. And, says mindbodygreen, if a water fountain is broken or the water starts to taste funny, you can report it in the app. The app also shows you “water ATMs,” where you can buy unpackaged water to refill an existing water bottle, Forbes reports.

"Instead of building water fountains, why not use our existing businesses? It's great for them —they get more people who are eco-conscious coming into their store,” Rosen told the Philly Voice. “And even if these people don't buy anything, it's great brand equity." You can download the Tap app for free in the Apple app store or in the Google Play store.

Rosen isn’t the first to attempt to launch an app aimed at helping people find public sources of free drinking water. Back in 2011, Google and the Pacific Institute, a global consulting firm, partnered to build an Android app named WeTap that crowd-sourced drinking fountain locations, according to the San Francisco Gate. The idea, says the San Francisco Gate, was to use crowd-sourcing to map out public water fountains, including their condition, water quality, photo, and any other comments users wanted to add. However, no updates on the app are available, and it’s no longer in the Google Play store.

Plastic pollution is a serious issue as our society reckons with the effects of climate change, which will itself affect water availability across the world (but particularly in the global south). By switching to a reusable water bottle, you can save around 217 plastic bottles from going to the landfill a year, according to Penn Sate, but as more people switch to reusable bottles, the lack of demand could drive corporations to reduce the amount of water they bottle — creating greater change on the corporate level as well as the personal. And with just how expensive bottled water is, having a way to find free sources of water will be great for pretty much everyone’s wallet, as well as the health of the planet.