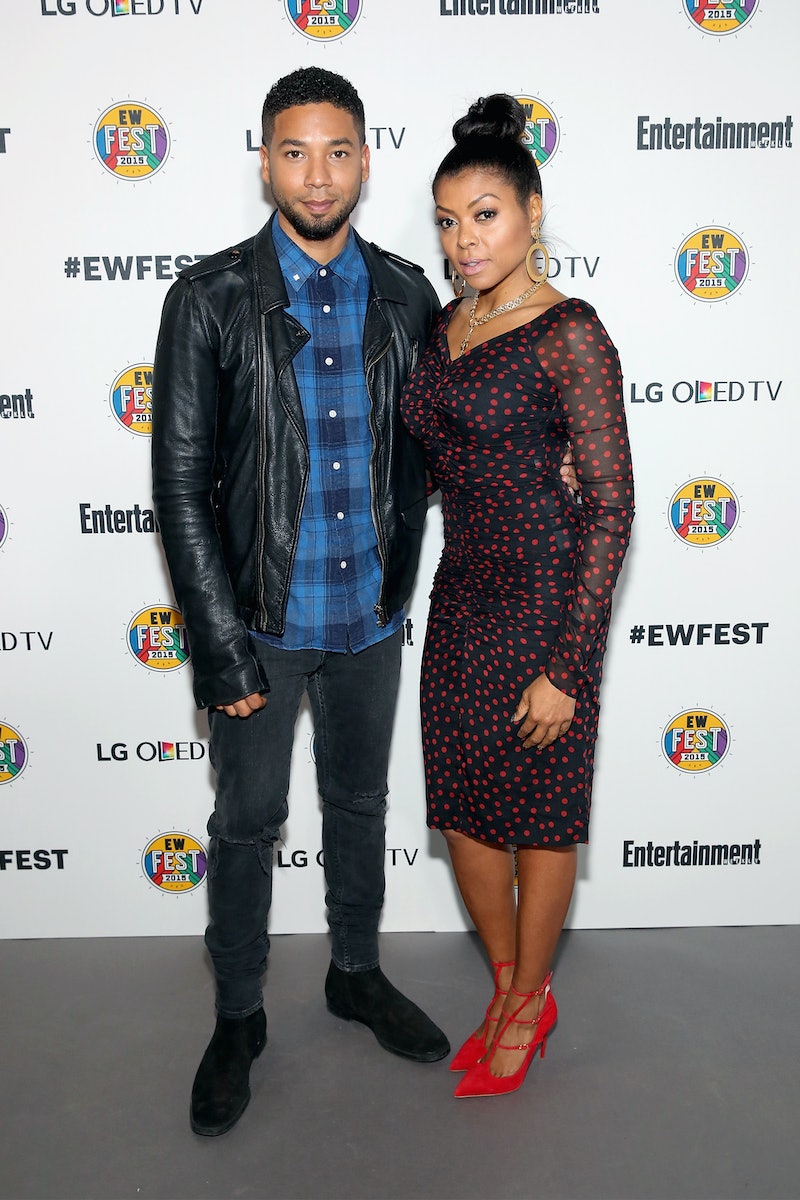 On Wednesday, Jan. 30, Empire star Taraji P. Henson supported Jussie Smollett, her costar and TV son, with a powerful post shared on Instagram. Her message follows the Tuesday, Jan. 29 attack on Smollett in Chicago, which police called a "possible hate crime" in a statement released the same day. Alongside a video of Smollett's political protest anthem "F.U.W.", Henson wrote a lengthy reaction sending love his way, all while declaring hate will never win.

"I wish what happened to my baby was just one big bad joke but it wasn’t and we all feel his pain right now. @jussiesmollett is pure love to the bone AND THAT IS WHY SO MANY ARE FEELING HIS PAIN BECAUSE IT IS OUR PAIN!!! I tell you one thing HATE WILL NOT WIN!!!! My baby is resilient and love still lives in him. The devil and his minions are very busy right now but one thing is for sure and two things are for certain #GODIS and that is all I know."

Henson also commented on Smollett's song and video accompanying her message by declaring how much "F.U.W." should be downloaded now more than ever and "until it goes triple platinum because the message is NEEDED." She continued,

"#weareresilientpeople AND #weaintgoingnowhereuntillwearefinished. The love so many have him just goes to show HE IS LOVE!!!! I LOVE YOU MY BABY MY BABY!!! #LOVEWINSALWAYS."

Smollett released "F.U.W." in 2017 and it serves as a response to Donald Trump's administration and the hate many marginalized communities continue to face. Smollett told the Associated Press, "This song is for the oppressed. That's why I feel like people will connect with it because it is very broad, because oppression is so broad."

The video also features a Trump mask and someone running over it with a wheelchair, which Smollett explained as a "representation of this false idea of patriotism." He later said, "It's our opportunity to take those masks off and shatter them, so that's what I did."

As reported on Jan. 29, Smollett was attacked in Chicago by two unknown assailants, who allegedly beat the actor with their hands and poured an "unknown chemical" on him, according to a Chicago Police Department statement shared by HuffPost's Front Page Editor, Philip Lewis. The assailants also allegedly yelled racial and homophobic slurs during the attack, according to the statement.

At the time of the report regarding Smollett's attack, Bustle reached out to his reps for comment, but did not receive an immediate response. Smollett also told police in a follow-up interview that the attackers yelled "MAGA country" during the assault, according to ABC News.

Smollett's other Empire costar and TV father, Terrence Howard, reacted to the news on Wednesday, Jan. 30, on Good Morning America. He said of Smollett,

"I heard he's getting better. He’s angry, but I know Jussie. Jussie's anger will dissipate, and he will forgive these people for what they did. But he won’t, and we cannot, forget their actions. They have to be forgiven because it was done out of ignorance."

Howard also stated, "They were all in shock that our family, the Fox family, the Empire family, the Lyon family was attacked by a bunch of hyenas today."

It's clear that Smollett has support from those closest to him, including his Empire family.

More like this
Christina Perri Reacts To Her 'Twilight' Song Being One Of YouTube's Most-Viewed Ever
By Radhika Menon
All The Celebrity Relatives Revealed On 'Claim To Fame' So Far
By Brad Witter
John Travolta, Elton John, & More Celebs React To Olivia Newton-John's Death
By Radhika Menon
Jane Lynch Revealed Why She’s Leaving 'Funny Girl' After Lea Michele Was Cast
By Grace Wehniainen
Get Even More From Bustle — Sign Up For The Newsletter