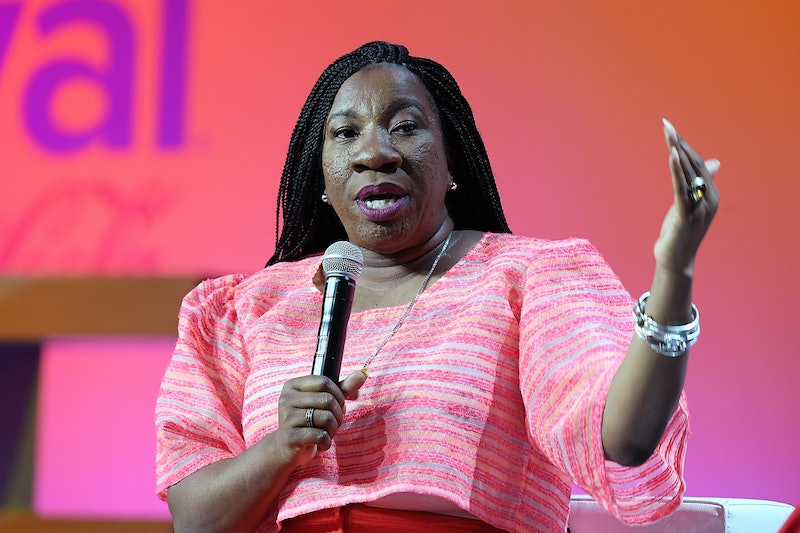 More than a decade after Tarana Burke founded the Me Too movement, she believes that it is no longer entirely what she envisioned. During a TED Talk on Wednesday, Burke said the backlash against #MeToo left her numb, and she attempted to reclaim the anti-sexual violence movement she initially set out to launch.

In Palm Springs earlier this week, Burke opened her talk by telling viewers that she found herself "falling short of finding the heart" to rally people around the Me Too movement. She felt this way, she said, because Brett Kavanaugh was confirmed to the Supreme Court despite facing multiple allegations of sexual misconduct, and because President Donald Trump had implied that a survivor was a liar — only to be cheered on by his supporters.

Burke also expressed her dismay that Me Too — "a movement that was started to support all survivors of sexual violence" — had been perceived as "a vindictive plot against men."

"We have moved so far away from the origins of this movement that started a decade ago, or even the intentions of the hashtag that started just a year ago, that sometimes, the Me Too movement that I hear some people talk about is unrecognizable to me," Burke said. "But be clear: This is a movement about the one-in-four girls and the one-in-six boys who are sexually assaulted every year and carry those wounds into adulthood."

Burke then went on to highlight many communities that have been disproportionately impacted by sexual violence, and reminded viewers that the Me Too movement is meant to serve all of them:

It's about the 84 percent of trans women who will be sexually assaulted this year and the indigenous women who are three-and-a-half times more likely to be sexually assaulted than any other group. Or people with disabilities, who are seven times more likely to be sexually abused. It's about the 60 percent of black girls like me who will be experiencing sexual violence before they turn 18, and the thousands and thousands of low-wage workers who are being sexually harassed right now on jobs that they can't afford to quit.

Ultimately, Burke said, the Me Too movement aims to "dismantle the building blocks of sexual violence: power and privilege." In order to do that, however, Burke said that the movement must consist of empathy for and between survivors. Survivors of sexual violence shouldn't have to constantly recount their experiences, Burke told viewers, and they shouldn't be asked to "lean into their trauma." Instead, she said, they should be given the space to create and lean into joy — especially in light of world leaders and media organizations doubting them at every turn.

Burke concluded her TED Talk by urging viewers not to stop fighting sexual violence. She acknowledged that she — like many survivors — is "exhausted" and "numb," but insisted that "we owe future generations a world free of sexual violence." Despite being concerned about the direction #MeToo has taken in recent months, Burke maintained that she believes such a world is possible, and encouraged people to continue educating themselves and their children about power, privilege, and empathy.

More like this
'Waterloo Road' Is Back, With More Than A Few Familiar Faces
By Sam Ramsden and Vivian Iroanya
Meet The Rugby World Cup Breakout Star Making The Sport More Inclusive
By Shahed Ezaydi
Here's How To Support Jewish People Amid Rising Antisemitism
By Hannah Orenstein
Here's The Role Lady Susan Hussey Played At Buckingham Palace
By El Hunt
Get Even More From Bustle — Sign Up For The Newsletter