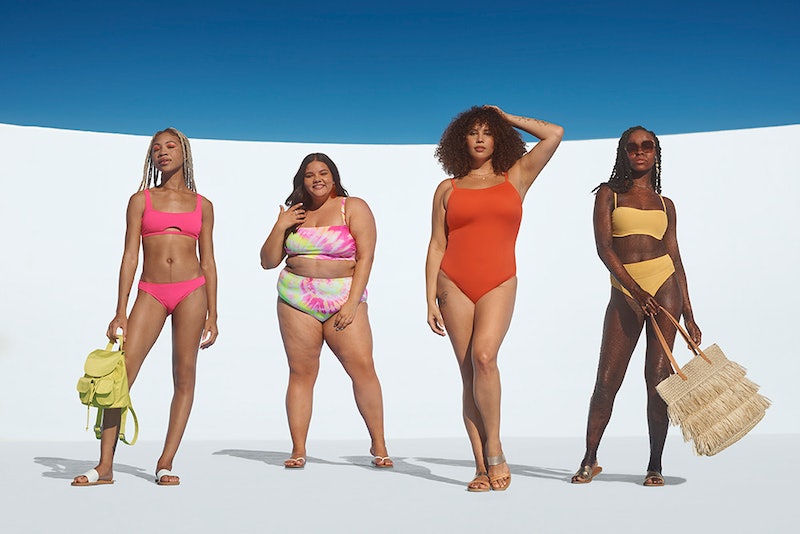 The term ‘bikini body’ was originally coined in 1961 to refer to the physical frame of a thin, tall woman. Nowadays, the phrase is much more inclusive, boiling down to its most literal definition: a body — any body of any size, race, shape, or ability — existing at the beach. With Target’s 2020 Swim campaign, the brand is reminding customers that it holds this ideology in high regard.

The retail behemoth hired a range of diverse models for their latest swimwear ads, including Jeyźa Gary, a model who was born with a hereditary skin disorder called Ichthyosis. The disorder occurs when there's a buildup of dead skin cells that appears on the skin like dry scales. Jeyźa says she went into modeling because she saw no one that looked like her — and her supporters are glad she did. Since the Target campaigned dropped, her photos have gone viral on Twitter.

Customers should expect to see even more inclusivity in future Target campaigns. The brand’s stance is that body diversity goes beyond size, race, or ability, pushing a clear message in their marketing that “Being you always fits.”

Their commitment to diversity materializes in their product lines as well. They currently carry swimwear up to a size 26 and 38DDD at several Target-exclusive brands. And these trendy swimwear styles (think leopard, tiger, zebra, and snakeskin) also feature more supportive design elements like hidden underwire, bra cup sizing, zipper details, and high-waisted silhouettes.

This year, you can expect 1,800 new styles to drop from Target brands through spring and summer. If you're ready to dive head first into the pieces in this campaign, you can shop every single one of them here. Prices will vary, but you can find some pieces that are as low as $14.99.

More like this
The Best Heels For Bunions, According To A Podiatrist
By Margeaux Baulch Klein and Maria Cassano
Cyber Monday Deals 2022: The Best Fashion Sales To Shop
By Dominique Norman
The Best Black Friday 2022 Fashion Deals To Shop This Year
By Dominique Norman
Mejuri’s Big Black Friday & Cyber Monday 2022 Sales Are Not To Be Missed
By Allie Fasanella
Get Even More From Bustle — Sign Up For The Newsletter