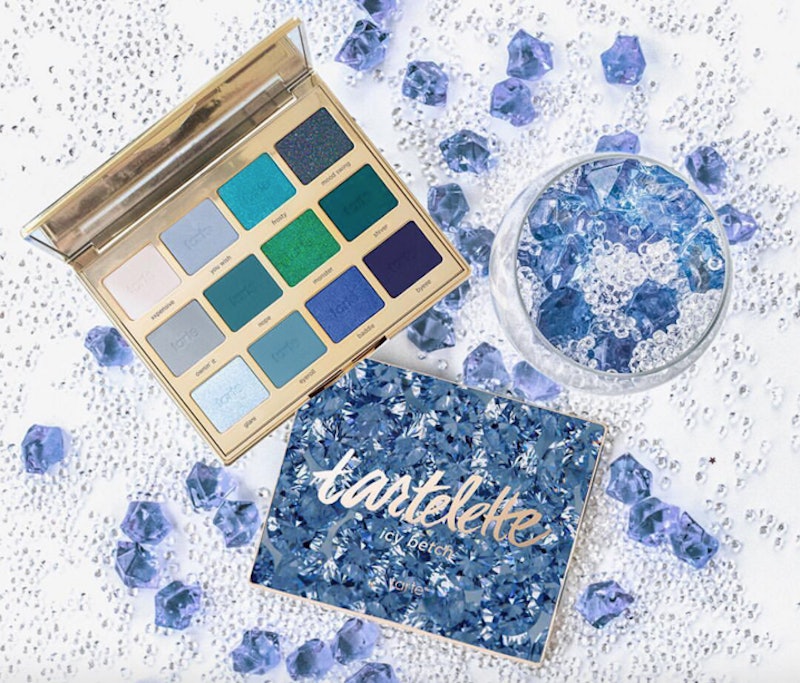 Beauty brands love to tease their fans on April Fools Day. There was everything from Hidden Valley's Valley Girl makeup line to Warby Parker's onion ring monicle with Arby's that were both clear pranks. But when Tarte announced a fake palette for April Fools Day, the joke was on them. What was meant to be a fake launch actually has a lot of people disappointed that they can't buy it.

Tarte posted a photo of pink, purple, and blue Peeps on Apr. 1 with the caption, "PEEP our IG story for an EXCITING reveal!" The stunning cool-toned palette was hiding in the brand's Instagram Stories, and it didn't take long for people to freak out over the Icy Betch Palette.

Although they didn't quite fall in love with the name, the green, blue, and purple shades caught peoples' eyes. If you're a far of Tarte, you'll know that they are a master of warm-toned shades and don't currently offer any exclusively icy toned palettes on the website. People instantly took to Twitter to praise the brand for doing something completely different than all others.

Until they realized that Icy Betch it was an April Fools joke. After that, people were actually pretty mad that the brand wasn't launching the palette.

The fake announcement was made to look just like the real deal. There was a teasing Instagram photo, stock image in the Instagram Stories, and even swatches of what the shadows looked like on a model. Then they put up a poll asking fans if they are an "Icy Betch" or a "Warm & Toasty" — the name of the real and fake Tartlette Palettes.

The joke was supposed to be that not many people like cool tones. When in reality, the joke was that a lot of people actually do love them. A lot more than you might think.

If there's one thing you don't mess with, it's beauty fans. The joke quickly blew up in the brand's face. Fans are begging for the brand to create the palette now. People took to Twitter saying that they knew it was a joke, because Tarte would never launch something so "interesting" and "not boring." Ouch.

Bustle reached out to Tarte to see whether or not they plan to launch an all cool-toned palette now that they have seen the feedback. A rep from the brand tells Bustle that they were overwhelmed to see the response and that fans should stay tuned.

Of course, nothing will stop the beauty world from sharing opinion, though. While some people are dying to see Icy Betch in the stores, others are already protesting the fake palette.

I'm guessing that this wasn't what the brand had in mind when they thought of the prank.

Dear Tarte, give people what they want. But please change the name.

People were already begging bae to buy it for them before they knew that it was fake.

Fans have a bone to pick with the brand. Which part is the joke, Tarte? WHICH PART.

Other people just love the entire product. But someone should let a person know that it's fake.

Hmm... I'm just going to set this one right here.

The word "finally" has been thrown around a lot lately when they saw the cool-toned shades from Tarte.

"And for this tutorial I will use the shade 'Eyeroll' from the Icy Betch Palette." Who wouldn't love to be able to say that?

There's nothing like a joke to wake people up to what they really want from a makeup brand.