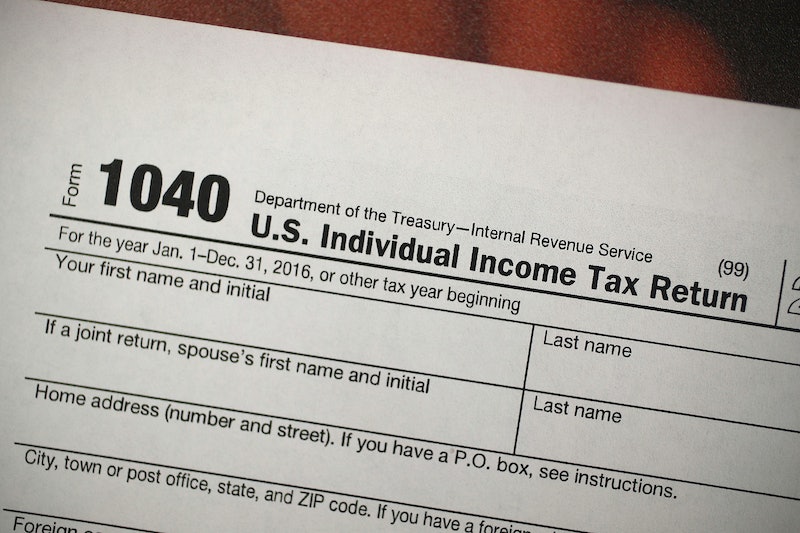 The Republican tax break was supposed to make filing taxes easier — so much so that you were supposed to be able to file your taxes on a postcard. But, as tax season rolls around, some of the simplifications are making taxpayers unhappy, especially if their tax return has decreased from last year or they owe the IRS. One big change was the way deductions work, and in 2019 there are several that have gone away.

This can be tricky for filers because it might seem like they're not going to reduce their tax bill as much as in the past — and for some people, that is possibly the case. But for most, it's not that dramatic. Everything about the new tax break was designed to limit the itemized deductions and move more people to the standard deduction, which was upped to $12,000 from $6,350. So, unless your itemized deductions are more than $12,000, none of this effects you.

And, if all of this sounds foreign to you, don't worry. Deductions are just expenses that you've had that you can subtract from your gross income so what you actually pay on is less. Say you make $30,000 a year. With a standard deduction, you would subtract $12,000 and then pay taxes only on $18,000.

With that understood, there are key deductions that have gone away. Perhaps the biggest change is the personal exemption (which is technically not a deduction but works similarly). This is most important for families and not single filers or even married couples filing jointly without children (whose increased standard deductions make up for it). In the past, for each dependent, a taxpayer could deduct $4,050. For families with several kids, this could mean a much higher tax bill.

2. Deduction For Interest On Some Mortgages

Another few that are gone have to do with homes. One is the deduction for interest on mortgages between $750,000 and $1 million; now it only applies on mortgages below $750,000.

3. Deduction For Interest On Some Home Equity Loans

There are also more limits on deducting the interest from home equity loans under $750,000; it must be used on improvements.

The other home-related deduction that's out is the moving deduction. Moving costs are no longer deductible, even if your company transfers you.

State and local tax deductions have also been capped, a big change for people paying lots of tax, either property or income, to their state, county, or city. Those payments used to be deducted in full, but now that's limited to just $10,000.

And in another change, if you owe foreign property tax, that's no longer deductible — even if it's your primary residence.

7. Deductions For Business Expenses For Employees

If there are other things you spend your own money on that are required for your job — like a uniform or some equipment — you can no longer write that off either. Businesses can write off more, so ask your boss to cover those expenses instead.

Should all this sound utterly confusing and you want to pay someone to do your taxes for you, there's just a bit more bad news. The deductions for tax preparation services are gone, too. That means you won't reduce your tax bill with the amount you pay the CPA. But if they're good, they'll know how to maximize the deductions that do remain.

You're still going to want to explore your expenses to best decide if going with the standard deduction is right for you, because there are still plenty of deductions you can itemize with.