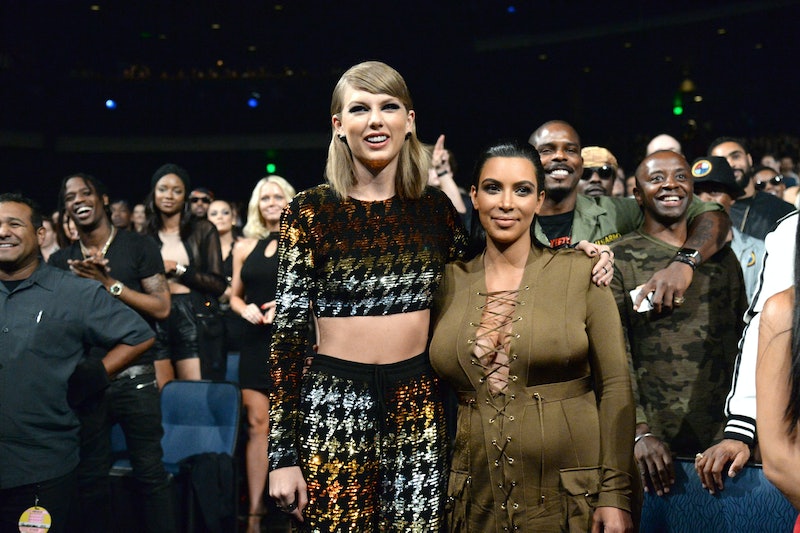 Three things are guaranteed in life: death, taxes, and the ongoing drama between Taylor Swift and Kanye West. Even during the coronavirus crisis of 2020, there have been new developments in their infamous feud. Taylor Swift and Kim Kardashian reacted to a new video of the Kanye West phone call, though they have yet to address it directly. The video, which originally leaked on Friday, March 20, reportedly shows the unedited version of the infamous phone call between West and Swift that Kardashian released snippets of in 2016. Bustle has reached out to representatives of Swift and West for comment on the video, but did not receive an immediate response.

The video has not yet been authenticated, but it appears to show West on the phone with Swift as he asks for her approval of a "controversial line" in his 2016 song "Famous." After a build-up of explanations, he finally tells her the line is "I feel like Taylor Swift might owe me sex," to which she responds, "That's not mean." As fans know, the lyric was eventually changed to "I feel like me and Taylor might still have sex," something that Swift and West discussed later on the call. Notably absent from this new video, however, is any mention of the lyric in which Kanye called Swift a "bitch."

When the song came out, Swift publicly disapproved of the line "I made that bitch famous" and said she was not told about the lyric. Kardashian took issue with her stance and leaked parts of Swift and West's phone call later that year. In those clips, it seemed like Swift had approved the lyrics, sparking enormous backlash against the singer, with fans spamming her Instagram with snake emojis, prompting her Reputation era. However, the clips that she released did not show West telling Swift about being called a "bitch" in the song, which this new video seems to prove didn't happen.

None of the parties involved have publicly commented on the video, but Swift and Kardashian did slyly acknowledge the leak through likes on different social media platforms. Over the weekend, Swift liked several posts on Tumblr written by fans celebrating that her stance was justified, including a "Taylor told the truth moodboard" and a picture of a baby sleeping peacefully, with a caption that read, "How i sleep at night knowing we were right all this time and now we have the receipts to prove it." Meanwhile, Kardashian liked a Tweet that said "The video showed nothing new. We all knew that. I’m so confused right now."

Now, all fans have to do is wait to see if Swift, West, or Kardashian will comment further, or if this leak is the final chapter in one of the most exhausting feuds of the 21st century. Seriously, it's been over ten years since West interrupted Swift's speech at the 2009 Video Music Awards and we're still talking about their feud.