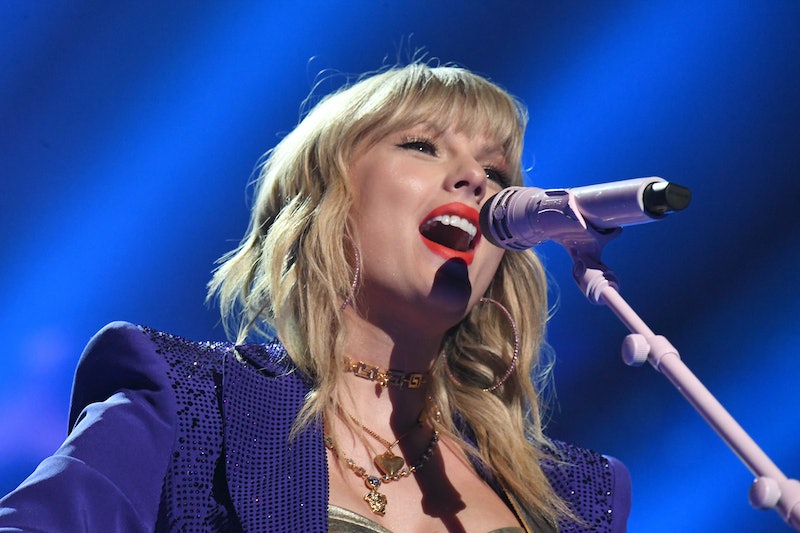 Taylor Swift emerged onto the music scene back in 2006 with her first album Taylor Swift, and has reigned supreme as one of the queens of pop ever since. But her career has not been plain sailing, as she has faced serious scrutinised, especially for her dating choices. Now, Taylor Swift has spoken to Zane Lowe about being slut-shamed, and her comments are pretty powerful.

On Oct. 30, Swift was a guest on Lowe's Beats 1 radio show and she opened about about the "unfair" scrutiny her and other female artists have faced when it comes to their dating lives. She said: "When I was, like, 23 and people were just kind of reducing me to … kind of making slideshows of my dating life and putting people in there that I’d sat next to at a party once and deciding that my songwriting was like a trick rather than a skill and a craft."

"In a way, it’s figuring out how to completely minimise that skill by taking something that everyone in their darkest, darkest moments loves to do, which is just to slut shame, you know? That happened to me at a very young age, so that was a bit hard."

Swift also spoke about the difficulties that women in the industry face, saying, "I don’t think people understand how easy it is to infer that someone who’s a female artist or a female in our industry is somehow doing something wrong by wanting love, wanting money, wanting success. Women are not allowed to want those things the way that men are allowed to want them."

But Swift explained that she is thankful for the #MeToo movement for raising awareness and helping society take a step towards the end of the slut shaming against women in the entertainment industry. She said "We have made incredible progress. We’ve made incredible strides and I can look back at those lessons I learned when I was younger and I really truly don’t think I did anything wrong by having a normal dating life in my early 20s."

Her perspective has allowed her to be more honest with the music in her new album Lover, she said. "It's the first time I've written about love that was very real rather than a song like 'Love Story' that I wrote when I was 17."

More like this
Taylor Swift & Harry Styles Had A Secret Reunion At The Grammys
By Shahed Ezaydi
Olivia Colman Stars In First-Look Trailer For BBC's 'Great Expectations'
By Sabah Hussain and Sam Ramsden
Claire Foy Spoke Out About 'The Crown's Gender Pay Gap
By Sam Ramsden
'Love Island' May Have Just Lost Its Main Character
By Jason Okundaye
Get The Very Best Of Bustle/UK
Sign up for Bustle UK's twice-weekly newsletter, featuring the latest must-watch TV, moving personal stories, and expert advice on the hottest viral buys.