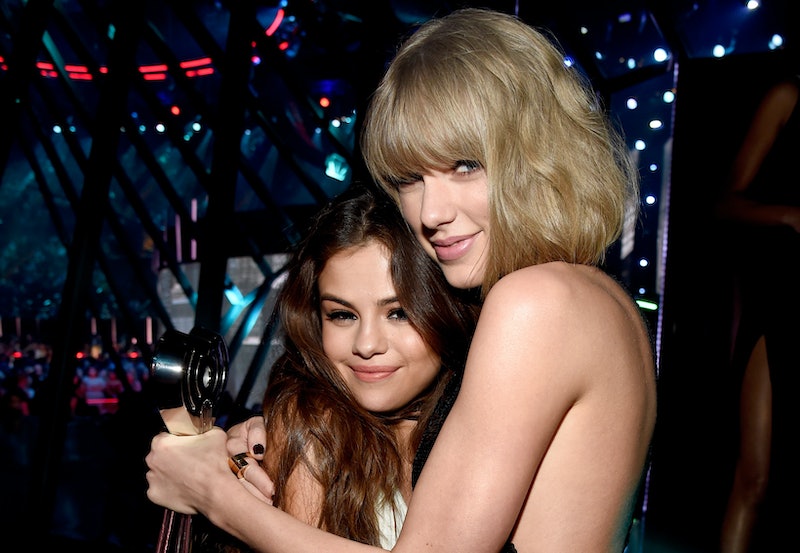 Miss Americana, which just dropped on Netflix, gives audiences a peek inside the life of one of the biggest pop stars of the past decade: Taylor Swift. But this peek is no career retrospective; it focuses on the past year and a half, finding Swift fresh off of a Grammys snub for Reputation and reeling from the backlash she faced given her silence regarding political matters. In such rough times, anybody would lean on their loved ones, and it's likely that's exactly what Swift did — she leaned on her best friend, Selena Gomez. The pair have been friends for at least 12 years now, and the support shown between the two of them has appeared to be nothing but strong and positive. Here's a timeline of Swift and Gomez's friendship, specifically highlighting those especially strong bonding moments between the besties.

The friendship between Swift and Gomez goes back as far as 2008, when they were both dating Jonas brothers. Swift, 18 years old at the time, had a short-lived relationship with the 19-year-old Joe Jonas while Gomez was dating Nick Jonas. Gomez spoke about those early days of friendship with KISS FM UK in 2017, saying, "It was amazing, because she was the girl with the big curly hair and all the bracelets and the cowboy boots, and I was definitely up-and-coming, and we just clicked." Though their relationships with the Jonas brothers wouldn't last — with Joe Jonas becoming the subject of one of Swift's trademark breakup songs — their friendship together would, as Gomez also said, "It was the best thing we got out of those relationships."

Over the next few years, the pair would make regular red carpet appearances at premieres for each other's various projects and, more often than not, at music awards shows. As contemporaries in their musical careers, it only made sense that they'd appear together at events like the Teen Choice Awards, the VMAs, the Billboard Music Awards, and the Grammys. Gomez would begin dating Justin Bieber, a relationship that Swift approved of... in public, at least, as her less-than-pleased reaction to their kiss in this behind-the-scenes video at the 2013 Billboard Music Awards may have revealed her true feelings for the pairing.

Later, in a chat with E! in 2014, Swift had a chance to speak on their friendship, commenting specifically about how special it is to her. "When your life changes, and you become thrust into this really strange whirlwind where what your life is different from what other people think your life is. And your life is commented on and your life is written about and fictionalized and all that. Both of us have kind of stuck it out and hung in there through all the different changes we've gone through." She continued, "Longevity is something you really can find very precious and rare in friendships."

That long-lasting friendship would carry them through some of the more difficult times in their own personal lives. For example, in 2016, when Swift's ongoing feud with Kanye West took a turn after Kim Kardashian publicly shared audio of Swift allegedly reacting positively towards West's lyrics about her in his song, "Famous," ("I feel like me and Taylor might still have sex / Why? I made that b*tch famous"), Gomez came out on Twitter in defense of Swift, subtweeting the entire situation and, specifically, the ensuing reactions. "There are more important things to talk about... Why can't people use their voice for something that fucking matters," she wrote. "Truth is last thing we need right now is hate, in any form. This industry is so disappointing yet the most influential smh."

In 2018, following several health scares, Gomez would eventually seek treatment for anxiety and depression . According to a 2019 report from E!, after Gomez finished her treatment, she relied heavily on Swift for support, as a source said, "Selena and Taylor have been in touch since Selena left her treatment and are very close. Taylor has reached out several times and has shown her support and love." The source continued, "[Selena] really leans on Taylor and considers her one of her best friends."

Given the seemingly precarious nature of celebrity friendships, it's somewhat heartening to see that a friendship like Swift and Gomez's can last as long as it has.