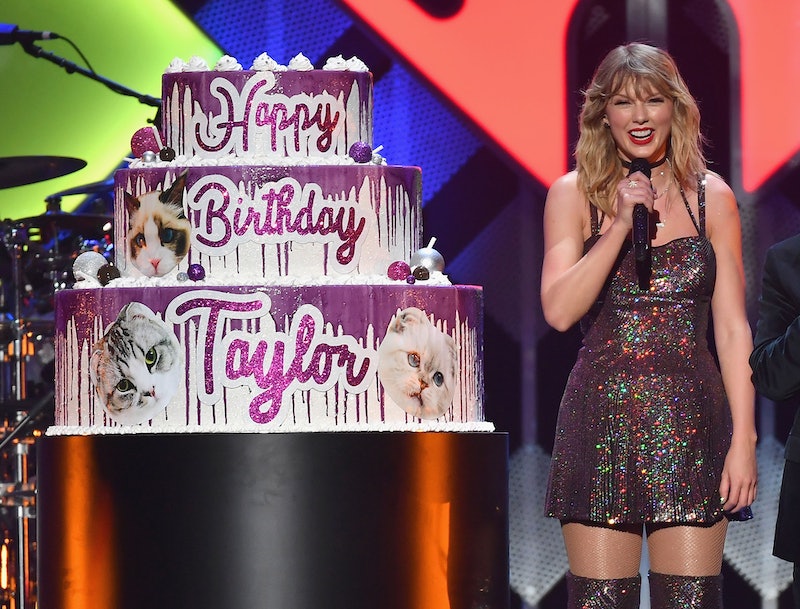 When you turn 30 just a few days before Christmas, there's only one way to celebrate — with the most star-studded, "aggressive" holiday-theme birthday bash of all time. On Friday, December 13, shortly after opening Z100's Jingle Ball in New York City, Taylor Swift celebrated her 30th birthday with lots of famous friends, and the photos from the singer's party prove that "Swiftmas" is infinitely more fun than any other winter holiday.

After kicking off her birthday celebrations by sharing a childhood photo on Instagram, which she cheekily captioned "WHO’S GONNA TELL HER SHE’S THIRTAY NOW," Swift started her night with her Jingle Ball performance at Madison Square Garden. "I am backstage at Jingle Ball — I actually go on first, so I go on at 7 [P.M.]," Swift said in a video on her Instagram Story, thanking all of her fans for "all the birthday love" before her performance. "I'm having the most happy, lovely, wonderful day. I just love you all so much, thank you."

Swift's video also gave fans a look at the "THIR-TAY" Santa hats that she and her guests rocked later in the night, as part of their festive celebrations. Later, the singer shared one of her birthday presents on her Instagram Story, revealing that her friend and fellow Jingle Ball performer Halsey had filled her dressing room with rainbow-colored balloons. "Ashley! This is amazing!" Swift said in the video. "Look at all these balloons!"

Before heading over to her party, a few of Swift's friends — including Martha Hunt, Cazzie David, stylist Ashley Avignone and Swift's high school best friend, Abigail Anderson Lucier — sang and danced along to the singer's set from a box in the Garden. Avignone shared a video of Hunt and Lucier singing along to "Lover," along with a clip of herself and David dancing to "Shake It Off" on her Instagram Story.

Swift, meanwhile, was serenaded with "Happy Birthday" by the crowd in attendance, which she documented on social media. "[Z100] really just got the crowd at Madison Square Garden to sing me 'Happy Birthday,'" the overwhelmed singer wrote on her Instagram Story, before telling the audience that their performance was "the most beautiful song I have ever heard. Thank you so much."

After her performance, Swift made "so many wishes" when she blew out the candles on her custom birthday cake, which was covered in red and white roses, as well as the faces of her three beloved cats: Meredith, Olivia and Benjamin. "Fur real guys this was my cake," Swift wrote on Instagram, alongside a selfie posing next to the three (very grumpy) faces of her pets. This was actually the second cake that Swift celebrated with on Friday night; while onstage, Z100 radio host Elvis Duran presented the singer with an oversized-three tier cake decorated in purple glitter.

After dessert, it was time for Swift and her friends to party at her house, which was decorated in silver and red streamers, gold tinsel and of course, plenty of sparkly Christmas trees. "Honestly spending my 30th with the fans who have made my life what it is at jingle ball, then throwing the most aggressive holiday party known to womankind... I just.. seriously feel so lucky for you all and will spend forever trying to find ways to say thank you," Swift captioned a series of photos on Instagram, including snaps with Jack Antonoff, Blake Lively and Ryan Reynolds. The singer also joked that she was "[crying] in Christmas trees" as a result of all of the love she received from her fans and friends.

In the snaps, Swift and her guests were decked out in the holiday finest, with the birthday girl rocking Christmas sweater-vest over a black sparkly dress, Queer Eye star Jonathan Van Ness wearing a Santa coat and Gigi Hadid rocking a green, Christmas tree headband. Several of her friends, including Lucier and Avignone, also rocked fluffy silver antlers to the festive bash.

Finally, in another series of photos from the big night, Swift posed with a nutcracker and a glass of wine, while boy band 5 Seconds of Summer rocked their "THIR-TAY" Santa hats. "Happy birthday but make it santa," the singer captioned the Instagram post. Notably missing from the party photos was Swift's longtime boyfriend, Joe Alwyn, though E! News reports that the British actor was in attendance to celebrate the singer's milestone birthday.

By celebrating with her fans, her loved ones and all of her famous friends, it looks like Swift managed to make sure that both the holiday season and the next decade of her life got off to the most exciting start possible. Merry Swiftmas, indeed.