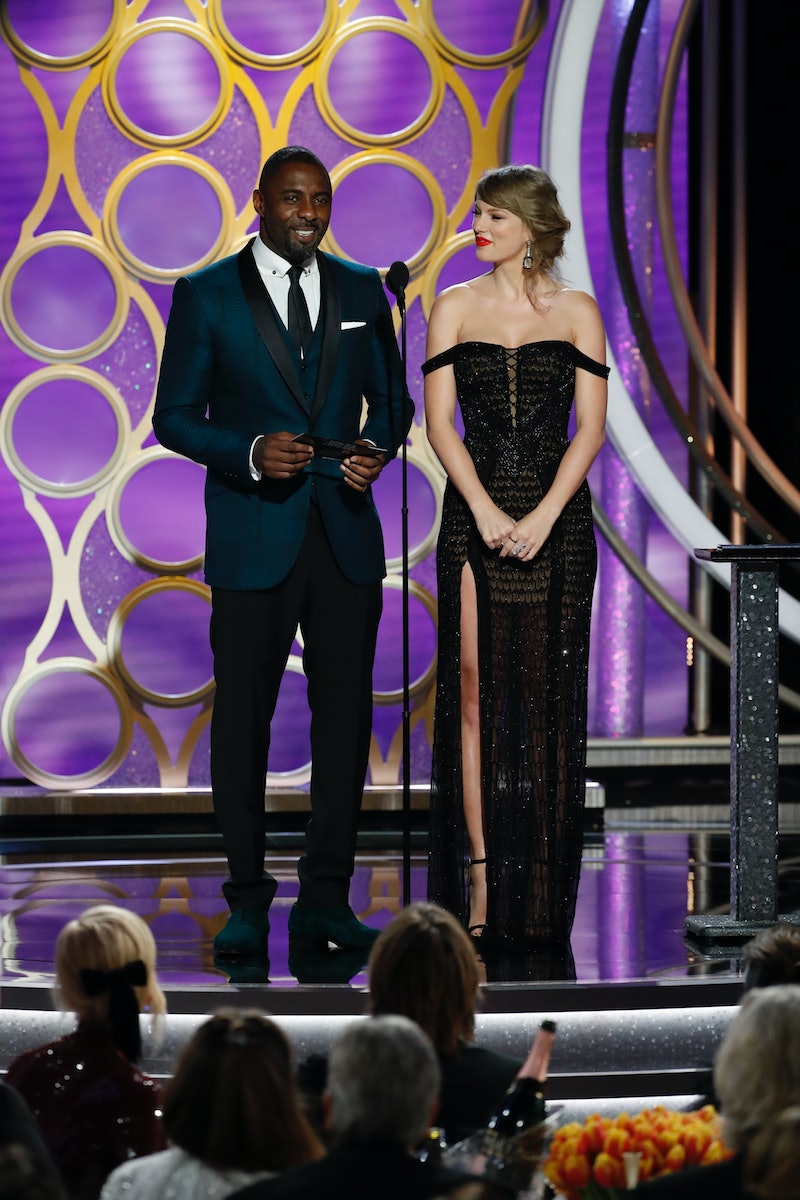 That was quite a sartorial surprise — and an awesome one at that. Taylor Swift wore a sexy and sheer LBD at the 2019 Golden Globes. It was excellent and unexpected, since the singer showed up late, missed the red carpet festivities and fun, and had to be ushered into the auditorium by security according to this tweet.

The black Atelier Versace gown featured sequins and a major slit — so Swift showed some serious leg. Since the superstar is known for her height, it was another sultry touch in a dress that was full of sultry touches. The frock was all about the details — from the criss-cross pattern in the bodice to those that defined the skirt.

The dress was off-the-shoulder and boasted a buttoned bodice, which provided an additional peek-a-boo element. It was playful yet classy at once.

Swift wore her blonde and curly hair pulled up off her face in a messy bun with face-framing tendrils and side-swept bangs. Her hallmark red lips were on full display.

She opted to not wear a necklace and instead wore drop earrings as her statement accessory.

Basically, the presentation was full-on Taylor Swift circa 2011 and 2012.

The Reputation singer was on hand to present the awards for Original Score — Motion Picture and for Best Original Song, the latter of which she presented to her pop peer Lady Gaga.

Here's a look at the full gown. You can see ankle strap heels peeking out from that slit. It hit all thee way at the top of her thigh. That blue x red lipstick shade remains her "go to."

You will see something different every time you look at Swift's dress. From this vantage point, you can appreciate the sheer-ness of it. Yet it never reveals too much, either. Swift's dress was certainly quite coy.

Swift looked elegant, even when off to the side of the stage.

Swift's 2019 Golden Globes look was pure Old Hollywood glam mixed with Swift signatures of which fans and fashion watchers are very familiar. You can also appreciate that she has legs for days in this outfit.

You can gawk at Swift's ensemble as it moves with her via this video as she presented the glorious Gaga with her Globe.

It's worth noting that the aforementioned Gaga also wore a clingy, column-shaped black Versace dress to the 2016 Golden Globes. So there's a sartorial sisterhood in Gaga's previous gown and Swift's current one.

At her first Golden Globes appearance back in 2013, Swift wore an eggplant-hued, Donna Karan Atelier taffeta gown in a mermaid shape. She wore her hair completely off her face. The entire look was totally stunning. The color was so unusual and totally unforgettable.

Here's one final look at Swift at the 2019 Golden Globes. An LBD is a wardrobe staple and it doesn't have to be boring. T. Swizzle just reminded us of that fact.