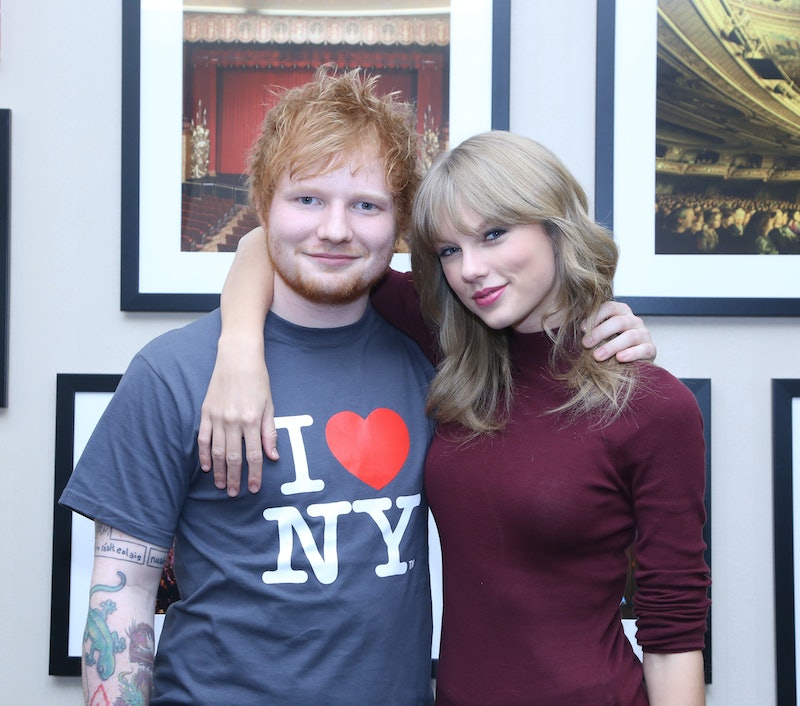 Since well before they went on tour together in 2013, Taylor Swift and Ed Sheeran have been a pair of cat loving, lyric writing best friends, and just in case anyone thought that had changed, here's all the proof you need. On Thursday, Swift's essay about Sheeran for Time 100's 2017 edition went live. And not only were her words about the "Castle On the Hill" singer incredibly sweet, but they also serve as even more proof that so far, this has definitely been Sheeran's year.

After a long wait of almost three years for his third album, Divide's first single, "Shape Of You," has been everywhere, and it became the year's top selling release in only a week. But if that's not enough to convince you that Sheeran's success is at an all time high, Swift's words ought to do the trick. In her essay, she writes about how he doubted he'd ever make music that could win him Grammys, recalling the first time that he ever played "Thinking Out Loud" for her — the song that eventually did snag him that coveted award.

But mostly, it was the way that she described his work ethic and talent that really spoke to their friendship.

Whether by choice or an unconscious evolution, when he decided on his musical ambitions, Ed became less of a boy and more of a tank. He is protected by an impenetrable and ever-present armor of enthusiasm that has helped him endure any setback, letdown or underestimation. His reaction to any idea that fails is to almost immediately come up with a new one. He’s like a fighter who pops back up on his feet before you even noticed he’d been knocked down.

As any longtime Sheeran fan knows, that wait for Divide was so long it was practically torturous — especially since he also disappeared off the face of the earth as far as social media and public appearances go during that time. But now that the album is here, it's worth it, and Swift describing him as a tank is the perfect way to explain his approach to music these days. You just know the 2018 Grammys are going to be Sheeran's night, and I can't wait to see it all happen for him

So much has changed for Sheeran and Swift since their friendship first began, but it's awesome to see that their bond is there for the long haul. When Swift releases another album in the (hopefully near) future, my fingers are crossed that they collaborate again. Together, they're unstoppable.