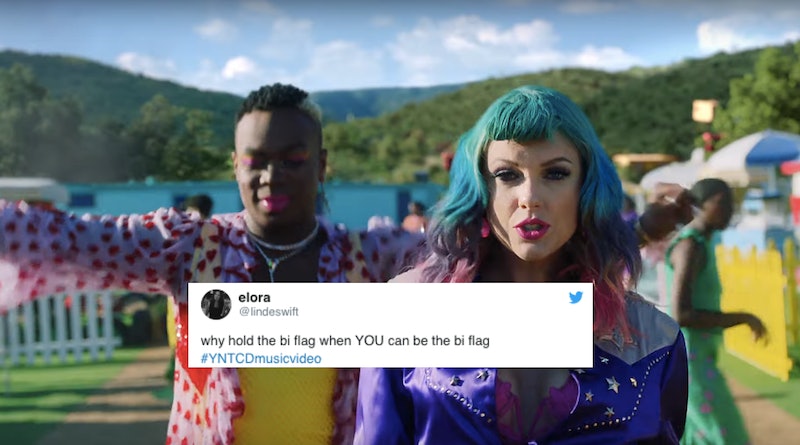 On Monday morning, Taylor Swift released the video for her new song "You Need to Calm Down." The song is a plea for haters in general to shut up, but in particular is aimed at people who are homophobic and transphobic. On top of that, the video is a clear celebration of Pride and some fans believe that extends to Taylor Swift's hair in the "You Need to Calm Down" video, which resembles the bisexual pride flag during one portion.

It wouldn't be a stretch. The video was released right in the middle of Pride Month, features a whole bunch of LGBTQ celebs, and includes a message at the end about signing Swift's Change.org petition about the Equality Act.

Plus, the 29-year-old singer loves packing her videos with symbolism, Easter eggs for fans, and just a ton of references to whatever it is she's singing about. In a video about LGBTQ pride that's already full of rainbows and famous LGBTQ faces, it would be more surprising if Swift had worn her hair pink, blue, and purple just as a coincidence than to purposely coordinate with the bi flag and show support for that community.

Here's what some of Swift's fans and viewers of the video have said about her look:

Some Are Just Plain Excited

Whether they're sharing helpful screenshots of the flag along with pictures of Swift or appropriate memes about "the power that that has," a lot of fans are just excited about the hair and the bisexual representation it offers.

Some Are Showing How It Goes Deeper

The Twitter user above said that Swift has been seen recently with the tips of her hair pink, blue, and purple, so this look is like a culmination of it all. On the cover of her upcoming album, Lover, the bottom of her hair is blue. On this cover of Entertainment Weekly, the bottom is pink. It doesn't seem she's had purple hair recently, but still, the pink and blue were part of her whole visual vibe for this album, which is very pastel and rainbow as shown on her Instagram.

Another person tweeted that Swift previously wore a blue, purple, and pink dress — with the colors in the same order as they are on her hair — on her Reputation Tour. In fact, while the tour was still going on, a fan account pointed out that her dress resembled the bi pride flag.

There Are Some Concerns, Though

Of course, Swift could be wearing the bi flag hair in the video as an ally, but it's unsurprising that this look has also brought up speculation as to whether Swift herself is bisexual, because that has been going on for quite some time. Some people consider the colorful hair part of the singer coming out and are excited, but the thing is, we don't know what Swift is actually saying and whatever she wants to say or not say is up to her.

That said, some Twitter users have voiced concerns about queer-baiting and about the potential of Swift dropping "clues" about her sexuality in the same way she has dropped clues about things in her past videos. One fan noted that it could be encouraging people to speculate about others' sexuality.

Swift is not required to address the flag hair or say anything else for that matter. But, as it stands, she has a lot of people who are very excited about the potential shoutout to the bi community, and some who will continue to have questions and concerns.