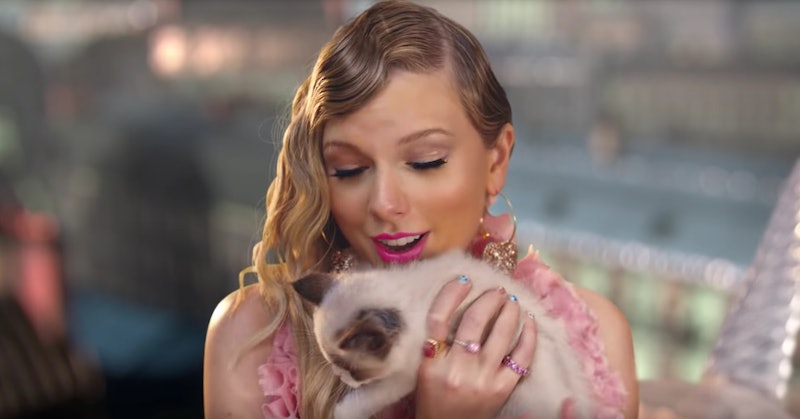 Taylor Swift released her brand new song and video, "ME!," on Friday, April 26. She had been dropping hints on Instagram for almost two weeks leading up to her release, including a photo of her two cats. And now, Taylor Swift's "ME!" behind the scenes video also shows how she fell in love with a new kitten on her set, and actually adopted him on the spot, turning two cats into three.

If you've seen the "ME!" music video, you know that her two older cats — Olivia Benson and Dr. Meredith Grey — play her "daughters" in the video. They're also already a huge part of her life, and often appear on her social media. So Swift is no stranger to cute cats, but, as this behind the scenes video shows, when she lays eyes on the new kitten, she loses it as anyone would.

Swift first met the kitten on set, when filming a scene in which Urie gifts the cat to her. In the video of their first encounter, the singer is so excited, she knows immediately when the cat has arrived. "Is the kitten around?" Swift asks in the clip. "I hear a kitten."

Of course, once she sees it, she and Urie gush over how cute he is, and note that he's purring up a storm. Swift casually asks, "Can I have him?" and the answer, to her surprise, is yes! "He is available," the handler says, to which Swift's eyes light up immediately. The wheels are clearly turning in her head about adopting the kitten, and if you follow her on Instagram, you know that she did, indeed, adopt the newly named Benjamin Button.

Later in the behind the scenes video, Swift is even more enamored as the shoot goes on, probably now because she knows he can easily be hers. She shows her mom and dad the new kitten, and they also easily fall under Button's spell. He's purring nonstop, so it seems like the feelings are mutual. "I've never had a cat love people this much," she says.

Swift announced her new cat adoption on Instagram, sharing a sweet photo of Benjamin Button on the day her video was released. "And then there were three," she wrote in the caption. If you're wondering how he's getting along with his new sisters, there's no word yet. However, in the BTS video, Swift does mention that they might not like him at first, saying, "They're gonna be really, really nice to you. Maybe not at first, but... just because they're jealous."

Swift also shared a few photos of Button struttin' his stuff and showing off his big blue eyes. "This is Benjamin Button. He’s a good boy," she wrote as the caption. Have you ever seen a better boy?

And to top it off, the singer also shared this perfect video of herself carrying him around the house. "This is how he prefers to travel," she wrote.

Swift's cat family is only growing, and thanks to this new behind-the-scenes video, it's not hard to see why.